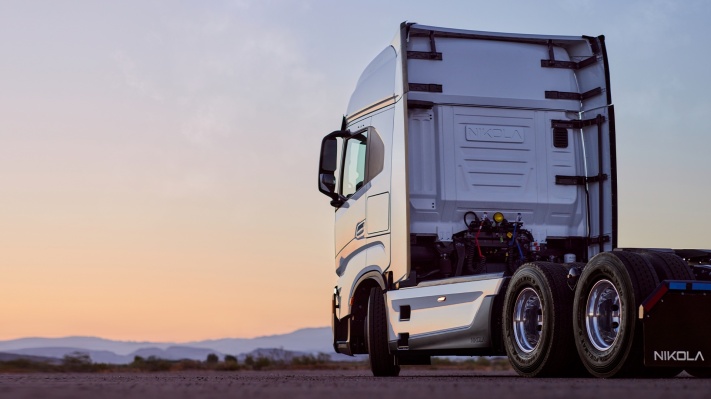 Nikola Corp., the electric truck startup that went public via a SPAC, is coming closer to commercial activity after a history of over-promising, missed deadlines, and investigations into its founder for lying to investors.

In its fourth-quarter earnings report released Thursday, Nikola ticked off a number of recent milestones and, critically, its plans to begin series production of its electric big rigs.

For investors, the developments may be little more than cold comfort after much of Nikola’s value was lost on the public markets since its mid-2020 highs. Still, the public company is very much working towards, as CEO Mark Russell wrote in its Q4 digest, “delivering vehicles and generating revenue.”

The beleaguered company, which has suffered from supply chain constraints that caused delays and investigations by securities regulators, said it will begin series production of its electric trucks in March. Nikola said it plans to deliver between 300 and 500 of the production-ready Tre battery-electric trucks to customers in the second quarter of 2022.

The forecast shows some progress, emphasis on some. Importantly, the report finally puts some distance between Nikola and Trevor Milton, the company’s controversial founder and former CEO and Chairman who was charged by the U.S. Attorney’s Office for two counts of securities fraud and one count of wire fraud. Nikola agreed in December to pay a $125 million fine as part of a settlement with the SEC. The company is paying installments and is seeking reimbursement from Milton, it said in its investor update.

Shares of Nikola are up more than 7% on the earnings report, a notable result on a day in which the stock market is suffering around the world in the wake of Russia’s invasion of Ukraine, tensions between China and Taiwan, the COVID-19 pandemic, and other issues.

The company’s rosy outlook isn’t constrained to its move from prototype to volume production of its electric Nikola Tre trucks. Nikola said it plans to begin construction on its first hydrogen production hub in Arizona. The company plans to announce two or more dispensing station partners in California sometime this year.

Nikola also recapped some of its more notable progress towards commercialization, including pilot testing with customers like Anheuser-Busch and Total Transportation Services Inc., securing a battery deal with Proterra, and work with ​​Corcentric Fleet Funding Solutions to help finance its trucks.

The company said it delivered the first two Tre BEVs to TTSI in California as a part of a three-month pilot program. The trucks have hauled multiple loads per day and logged more than 4,500 miles combined and have completed a 204-mile journey on a single charge, the longest range of any BEV TTSI has tested, the company said. (Readers: what non-GAAP result is your favorite? MAU/DAU ratios from social media companies, or miles-driven by EV concerns?)

But the above positive notes have something in common. None of them generated any income in 2021. As such, Nikola’s Q4 2021 and full-year report is a sea of red ink.

Nikola had no revenue in the fourth quarter of 2021, or at any point in the year. So it closed 2021 with zero top line, and $162.7 million worth of operating expenses. The company’s full-year operating loss was therefore just that: $162.7 million.

That result was greater, and therefore worse, than Nikola’s 2020 operating loss, which came to a slightly more modest $146.8 million. However, that metric included around $14.4 million in impairment costs, so the company’s pace of expense growth is greater than it appears from its face-value operating losses; Nikola’s rising expense base is having a material impact on its profitability, or lack thereof.

To be clear, this is what both TechCrunch and the market anticipated. Nikola remains in ramp-up mode as discussed above, which means that its expenses are rising, its revenues are forward expectations, and potential profits far in the future. Those losses may continue to grow in 2022, but with deliveries of its first production trucks beginning, it should also mean actual capital, aka revenue, should begin to flow into the company.

Still, there was good news in the company’s earnings report, namely that it lost less money than anticipated in Q4 2021. While Nikola lost $0.39 per share in the quarter when counting all costs (GAAP), its adjusted net loss per share was just $0.23, largely the result of removing share-based compensation expenses and the financial impact of regulatory expenses from its cost mix. The market had expected a $0.32 per-share loss on an adjusted basis for the fourth quarter. That, coupled with the company’s commercial progress, could be construed as encouraging.

Good news or not, the company has payments related to its settlement with the SEC ahead of it, zero revenues, and rising expenses. Its ability to sell trucks at volume, and with positive unit economics, remains uncertain. Still, investors value Nikola at $3 billion as of the time of writing. That’s a pretty big bet that the company’s trucks will roll, and that when they do, profits will draft in their wake.