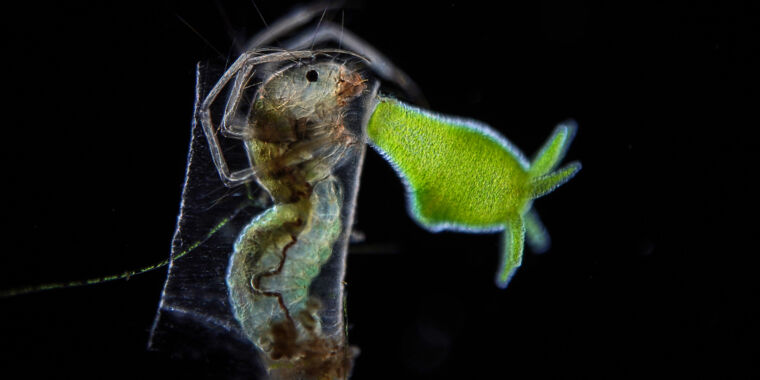 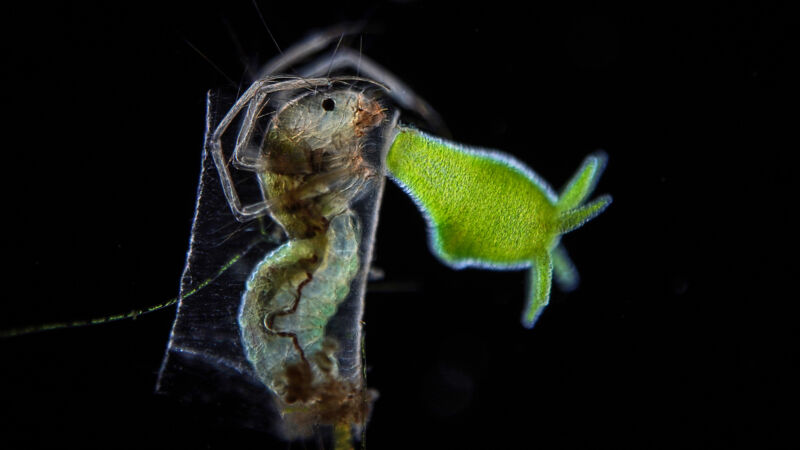 Enlarge / A small cnidarian called a hydra (green) has attached itself to the cocoon of a caddisfly.

Microscopy is essential to many areas of science. We use it to look at everything from the small devices we fabricate to the tiny structures inside cells. And microscopy wouldn’t function without input from many areas of science. Chemistry helps with stains, dyes, and sample preparation. Physics determines what’s possible with different forms of optics. And fields like biology and geology tell us which samples can give us valuable information. Combined, these tools give us a nearly infinite suite of options for looking at the world of the small.

With the right choices among those options, a microscope can do far more than just advance science; it can create objects of art. Each year, when Nikon releases the results of its annual microscopy competition, we struggle for new superlatives to describe the images. This year is no exception. So rather than struggling with words, we’ll get straight to the images.

The rock. We tend to think of microscopes as tools that examine living matter, revealing details that are critical to understanding cells and the organisms built from them. But chemicals and minerals also have features that aren’t always visible to the naked eye and can be critical to their behavior as well. We’ve always loved close-ups of crystals and rocks, and this year’s collection of images contains a surfeit of them.

This is a synthetic sapphire that was contaminated during production. That accident became art.

Most of this image is the inside of a magnesium/aluminum oxide gemstone. The object that appears to be floating is a calcite crystal that was embedded in the gem as it formed.

If you have the right countertop and look closely, you might see something that looks like this detailed photo of quartz.

A Fairburn agate, which comes from a specific area of the US Midwest.

Notably, the image was taken with an Olympus camera, so Nikon isn’t purely about promoting its own hardware here.

A cross-section through a meteorite. Unfortunately, Nikon doesn’t provide information on the type of meteorite this came from.

A crystal of common table salt.

This is a cross-section of a sedimentary rock that’s composed of an aggregation of smaller grains that were cemented together with limestone.

The insects. These are more traditional subjects of microscopy. Many insect species are barely visible to the naked eye, while many others have features that can only be seen under magnification. Both remind us that there’s an entire world of things going on outside our daily experience—in some cases, that world exists inside our houses.

It may look green, but this is a gold-dust weevil.

These repeated structures are sensory organs on the antenna of a moth.

It looks so cute! But at different stages of its life, it’s either a parasite or a predator.

This is the leg of a beetle that belongs to a group with disproportionately large hindlimbs.

A caterpillar, emerging from its egg case, chows down on the case of its previously hatched sibling.

This tiny insect looks like it could have buzzed past you today. But it’s 40 million years old and preserved in amber.

If seeing this doesn’t give you nightmares, would it be worse to know that one of these is probably inside your house right now? This is the proboscis of a common house fly.

This is a member of a large group of wasps, mostly with metallic coloration. The wasp lays eggs in the colonies of other bees and wasps and has them raise its offspring.

A bit of the rest. We’ve shared so many fantastic images, and we still haven’t even gotten to some of the smallest items yet—living cells and the structures they create. I won’t say we’ve saved the best for last, but we certainly have some very, very good images in this final gallery.

The top image from this year’s contest, this otherworldly landscape is actually the surface of an oak leaf.

If I told you this is a synthetic particle, you probably wouldn’t be surprised. But it’s a single pollen grain perched on a flower petal.

While this looks astonishing, its common name is the water flea, and it’s best known as the oldest group of animal species that reproduces without sex.

This incredibly elaborate structure is the root of a crop called millet. That organization is needed to keep all the materials flowing to and from the rest of the plant.

We showed you a root earlier; this is the animal equivalent. It’s the individual villi that line your intestine and absorb nutrients.

Cells don’t simply let all their internal components slosh around at random. The protein labelled here, called vimentin, is part of the system that keeps things in place.

A mix of wetware and hardware. Two populations of nerve cells grow on either side of a device and send processes across a barrier that allows them to communicate.

This is a single sensory neuron grown in culture, showing just how much of the body one of these can potentially monitor.

These are the nerves cells in a chicken embryo, seven days into its three-week development. Different types of nerves are stained different colors here.