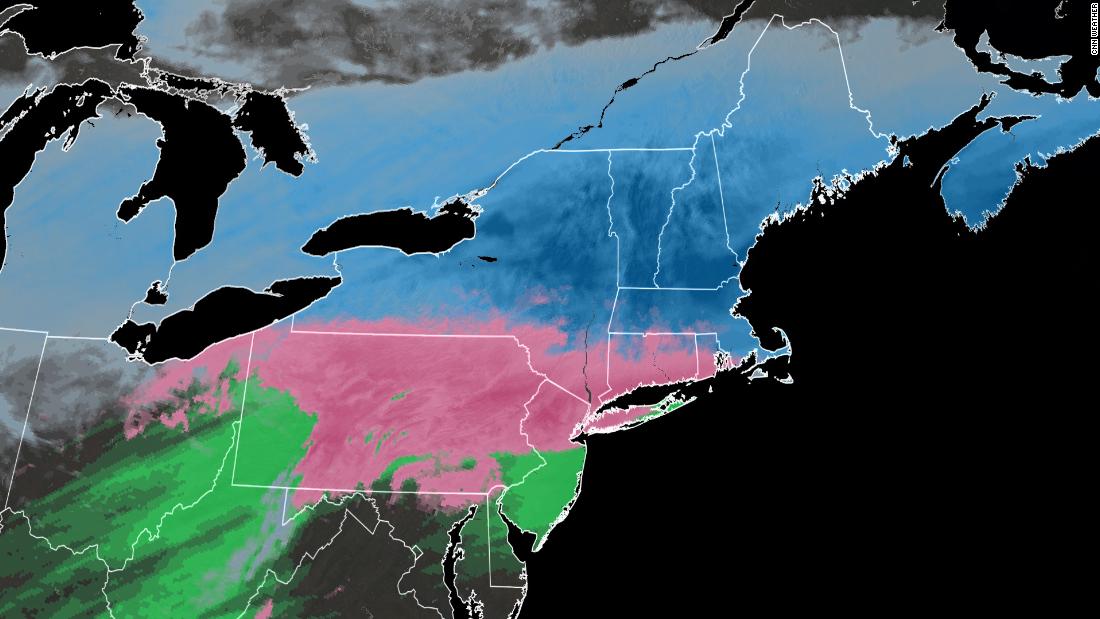 With heavy snow falling in the Boston area, a commuter train hit an unoccupied snow plow, affiliate WFXT reported. No one was injured.

State police said two lanes are closed on the Mass Pike east in Auburn after a tractor-trailer rolled over, the station said.

Officials have urged people to avoid driving if possible.

Up to a foot of snow is expected in northern New York state and in central New England, the Weather Prediction Center said Friday. These areas may potentially see anywhere from 6 to 12 inches of snow, with lighter totals in local areas.

“Heavy snow rates of 1” to 2” per hour will make travel difficult into the early afternoon,” the prediction center reported.

“I strongly encourage everyone in Connecticut to stay off the roads on Friday morning unless absolutely necessary, particularly during the height of the storm so that DOT (Department of Transportation) crews can clear the roads and keep everyone safe,” Lamont said in a news release.

A mix of heavy precipitation ranging from 4 to 8 inches of snowfall and a light glaze of ice is expected in Hartford on Friday, according to CNN meteorologist Robert Shackelford. Snow can change to sleet and freezing rain during the late morning and back to snow by the afternoon, he said.

In Massachusetts, Gov. Charlie Baker also urged people to stay off the roads, warning them that plummeting temperatures could cause flash freezing and icy roads, particularly in areas that see the wintery mix of rain and sleet.

More than 60% of flights at Boston Logan International airport are canceled Friday, according to the flight-tracking website FlightAware. Overall, more than 1,200 flights in total have been canceled in the US, it said.

The storm is moving in from the South and the Midwest, after bringing low temperatures and icy conditions to portions of Texas, Arkansas and Missouri.

According to the forecasts, Boston can expect up to a foot of snow that will peak in the morning hours, potentially falling 1 to 2 inches per hour, similar to the rest of New England. The city is under a storm warning through Friday.

Meanwhile, up to 1 inch of a mix of snow and sleet is expected to fall on New York City roads. Farther north in Buffalo, New York, the storm could dump 8 inches of snow, in addition to sleet and freezing rain.

Heavier snow may be seen in Portland, Maine, where between 6 and 9 inches are expected, and another 8 to 11 inches are forecast for Concord, New Hampshire, throughout Friday.

In Philadelphia, up to half an inch of a wintery mix is expected as well as some ice.

And as for Midwestern cities, about 4 inches of snow are in store for Detroit, Milwaukee and Indianapolis. A wintry mix is expected in Cleveland and Columbus, Ohio, as well as Springfield, Illinois.

Weather alerts have been discontinued in the Midwest since the storm has moved out.

Rain is expected in the Southeast and mid-Atlantic.

CNN’s Amy Simonson and Haley Brink contributed to this report.