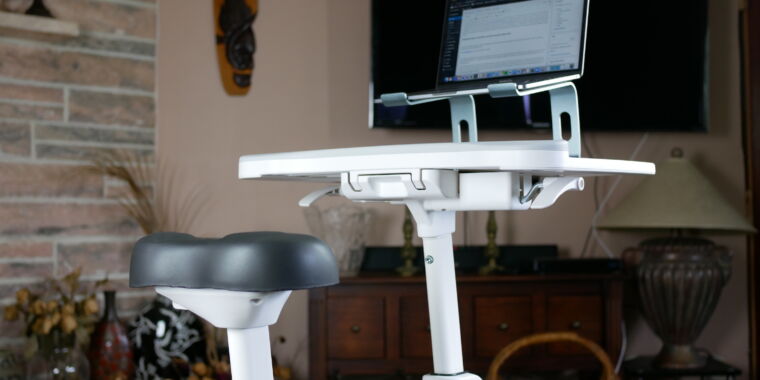 Enlarge / Behold: It is both desk and bike.

If you work from home, it’s a good idea to spice up the home office from time to time. Some of us have been living the telecommuting life for longer than others, and while we at Ars have some extensive experience (and an equally comprehensive guide on the best gear for home offices), we still like to periodically change things up to meet our dynamic needs. That’s how I found the Desk Bike.

Well, that, and I’m recovering from a foot injury that recently got me into biking as a mode of low-impact exercise. Nevertheless, Flexispot’s V9 Desk Bike now sits in my room and gets consistent use. You (or your kids) might have seen this very bike make waves on TikTok recently—Flexispot’s ad campaign proved a savvy and fruitful move, garnering over 2.5 million likes and coverage from many media outlets.

It’s well-known that exercise, even in the form of a 30-minute daily walk, produces a wide range of positive impacts on physical and mental health. But as of 2018, 80% of American adults don’t meet that daily threshold. It can be hard to peel ourselves away from the computer and actually move our bodies, but not doing so is literally killing us. The Desk Bike isn’t a magic bullet for healthy living, but it can help you be more active and get out pent-up, fidgety energy during the day.

Who is Flexispot and what’s a desk bike?

The Desk Bike comes almost fully assembled. Just unfold the legs and put on the desktop. Then do the reverse for easy storage.

The height-adjustable saddle is cushioned and supportive, making it easy to sit on for long periods. The wrist rest on the desktop is another much-appreciated touch.

The desktop is large enough to accommodate a simple but comfortable setup.

Levers under the desk can raise and lower the platform or slide it forward and back, but you can’t tilt the desk like an easel.

It also has a rubber-based cupholder, digital display, and resistance knob. I like the lowest setting for casually pedaling during work.

(Ars Technica may earn compensation for sales from links on this post through affiliate programs.)

Flexispot is a standing desk brand that competes with the likes of Vari, Fully, and Uplift, three brands we recommended in our home office setup guide. Some of Flexispot’s offerings undercut these brands by hundreds of dollars and offer similar specs, construction, and functionality to the more expensive models. I’ve been using Flexispot’s Kana Bamboo desk for a while now in addition to the V9 Desk Bike. I’m in love with the Desk Bike, but the Kana desk has performed well, too. It compares well to similar offerings from the top brands; the setup is simple and it feels solid.

The Desk Bike is a simple concept that seems a tad silly at first, but once I tried it, I found myself wanting to use it more and more. Part of this is due to my intrinsic desire to feel active—and how nice it feels to let out some fidgety energy while working—but the execution of the Desk Bike keeps me coming back to it. Advertisement

The first thing that grabbed me was the dead-simple assembly. When you take the bike out of the box, just unfold the legs and attach the desktop (the simplicity makes storage a breeze, too). I was done with assembly in three minutes; it took longer for me to find the required double-A batteries. You’ll need those to power the digital display, where you’ll find readouts for your distance, calories burned, speed, cadence, and time spent. It’s nothing fancy, more akin to a handheld digital stopwatch than to the touchscreen displays of a Peloton.

You can purchase the stationary bike alone (and save a couple of bucks in doing so), with a backrest, or get the full Desk Bike setup, which comes equipped with a height-adjustable tray. The latter’s desktop has a wrist rest, and it’s large enough to accommodate my laptop on a stand and my wireless keyboard, with space to spare. There’s even a cup holder in the center of the bike.

You can purchase bike alone to fit with an existing desk, or order the full desk bike setup to include an attached tray with built-in wrist rests.

There’s also an option to buy one with a back rest for longer durations of work.

The seat is cushioned but firm enough to provide pleasing support, and it’s wider than a typical bike seat. I can sit on it for about two hours without feeling sore or uncomfortable, which is quite the feat for my bony posterior.

The bike is whisper-quiet when in use, and you can pedal backward to mix things up. A resistance knob with an eight-point scale lets you ramp up the intensity, but I found it most enjoyable to pedal along at the lowest resistance while working. The bike doesn’t have the freewheeling feeling of a Peloton or an actual bike, instead offering just enough resistance to make you feel like you’re going somewhere, even though you’re not. Advertisement

I have only a few complaints. The desktop is a little wobbly; it’s not bad enough to be unsettled by your pedaling or endanger anything resting on it, but it’s not as sturdy as I’d like. It’s also way too difficult to lower the desktop. Raising it is easy—just press the lever and lift—but lowering it requires you to stand up and apply force to it. I found the same issue in adjusting the seat height. Lastly, while the desktop is adjustable forward and backward, it can’t tilt upward like an easel. It’s a small thing, but it could bolster the comfort a bit on an otherwise ergonomically well-sorted device.

Still, the Desk Bike is an easy-to-use and fun machine that helps break up a monotonous and sedentary workday. You should still take breaks, go for walks, and get some fresh air. But in between those times, you can feel active, too.