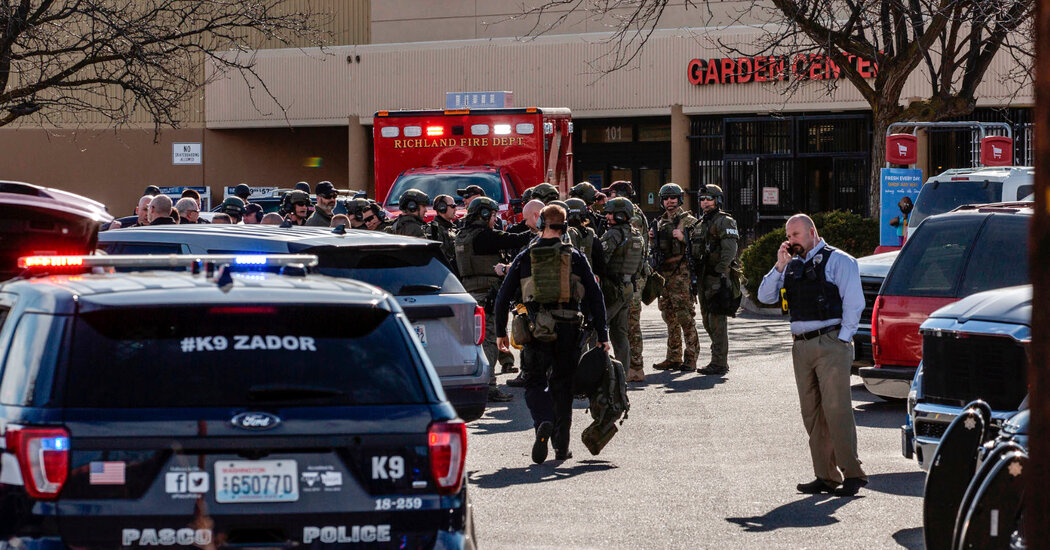 One person was killed and another person was injured in a shooting in a grocery store in Richland, Wash., on Monday morning, the authorities said.

Police officers responded just after 11 a.m. to reports of a shooting inside a Fred Meyer grocery store, Cmdr. Chris Lee of the Richland Police Department told reporters at the scene.

Commander Lee said that the authorities were searching for the gunman, who had fled the store and had not been found. The police circulated a photograph of a bearded man pushing a shopping cart.

“We believe he is armed with a handgun,” Commander Lee said.

It was not clear what had led to the shooting.

“The suspect should be considered armed and dangerous,” the police in Kennewick, Wash., southeast of Richland, said on Twitter.

One person was taken to a hospital, Commander Lee said.

“This is currently an active scene and we ask that individuals avoid the area as the suspect has been located at this time,” Kenna Ladendorf, a crime prevention specialist with the Richland Police Department, said in an interview.

Agents from the Seattle field division of the Bureau of Alcohol, Tobacco, Firearms and Explosives were on their way to assist the Richland police with the shooting investigation, the agency said. A S.W.A.T. team was also at the scene, Commander Lee said.

All of the schools in the Richland School District were on lockdown on Monday afternoon because of the shooting, according to the school district’s website. Richland, a city of about 60,000 residents, is in southeastern Washington.

Fred Meyer, a chain of grocery stores that was founded in Portland, Ore., is owned by the Kroger Co. In a statement, the company said it was “deeply saddened” by the shooting.

“We are cooperating with local law enforcement, who have secured the store and parking lot,” the company said. “The store will remain closed while the police investigation continues, and we have initiated counseling services for our associates.”

Workers at the store voted last fall to unionize after a contested two-year organizing effort.

The shooting at the Fred Meyer store came after several fatal shootings in American grocery stores in the past year.

Last March, 10 people died after a 21-year-old man opened fire in the aisles of a King Soopers store in Boulder, Colo. The next month, a store manager died and two people were injured in a shooting at a Stop & Shop in West Hempstead, N.Y. In June, a toddler and his grandmother were shopping at a Publix supermarket in Royal Palm Beach, Fla., when they were fatally shot by a 55-year-old man who then killed himself.