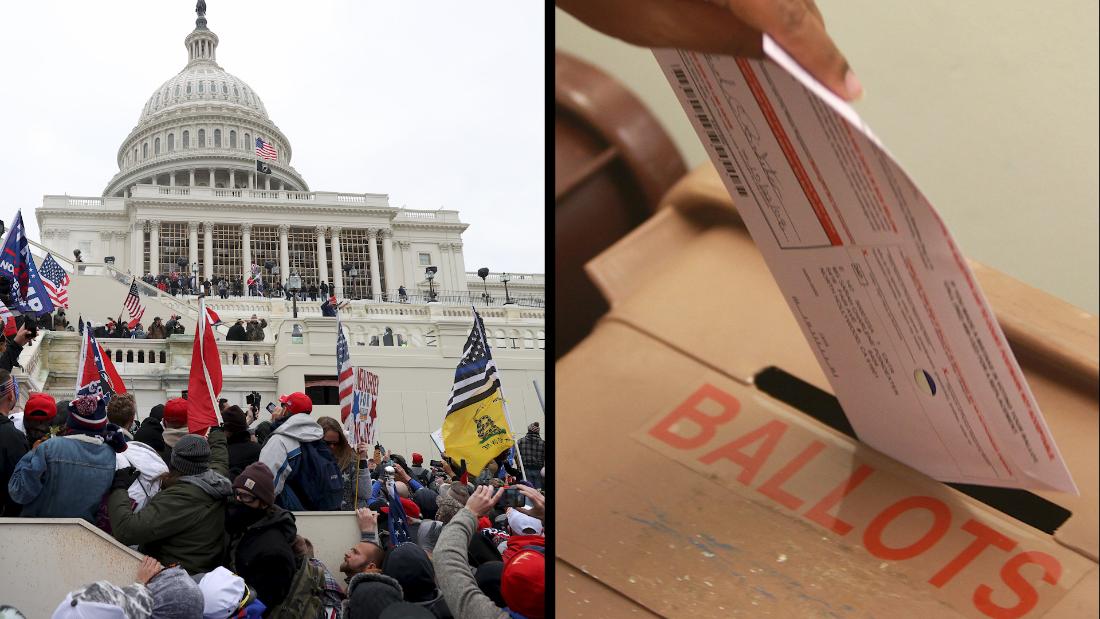 We work to make sure that every eligible citizen is registered, has the information they need to vote, has their vote counted correctly and can have rightly placed faith in a complex electoral process — one made more onerous by the continuing Covid-19 pandemic.

With that in mind we pose this question: Who do you want running elections in your state? An election denier who refuses to acknowledge the will of the voters in 2020 and who was present during the tragic US Capitol insurrection in January 6 2021? A candidate who aims to rewrite the history of the 2020 election, falsely repeating debunked allegations that voting machines in Georgia flipped votes cast for former President Donald Trump to President Joe Biden? Or would you prefer a civil servant and dedicated advocate for democracy committed to defending and strengthening the most fundamental American right? This choice — a choice between truth and lies, autocracy and democracy — will be on the ballot in our states and dozens of others this November. There are already nearly two dozen candidates running to be the chief election officer in their state who question the legitimacy of President Biden’s win in 2020 and support efforts to both restrict access to the ballot and institute changes that would allow officials to invalidate or overturn results at will. One has called for the dissolution of the bipartisan Wisconsin Election Commission, which fairly administers elections in the Badger State; another proposed a bill in the Arizona state legislature that would allow that partisan body to simply overrule a secretary of state’s decision to officially certify the results of an election. Three candidates have appeared at events with prominent members of the QAnon movement and one proudly restates the group’s outlandish conspiracy theories, which are unworthy of being restated here. By calling into question President Biden’s certified victory, these candidates have shown us who they are: individuals willing to, if given the authority, nullify the voice and will of the voters if they dislike the results in elections they oversee. And in supporting extreme, anti-democratic changes to voting laws that will make it more difficult for citizens to access the ballot box, they demonstrate an un-American commitment to partisan goals over truth and democracy.

But we want to be clear: This will only happen if the American voter allows it.

Because this fall, voters in California, Michigan and across the country will have a clear opportunity to reject candidates who run on a platform of party over country. They can hold accountable those seeking to use their platforms and authority to erode confidence in our election system and deny those willing to overturn the will of the voters the ability to do so.

In 2022, voters can act to ensure anyone with the explicit mission of overturning democracy fails to ascend as the chief election officer of their state.

Indeed, the American voter is the only one who can save our democracy from those seeking to serve as election officials, secretaries of state and attorneys general who would be poised and empowered to overturn elections at will.

We say this not to be alarmist, but rather to be pragmatic about what’s in front of us in this pivotal election year.

When we took our oaths of office as secretaries of state, and when we walk into our office each day, we do so not as Democrats or Republicans but as Americans. We carry out our sworn constitutional duties and fulfill our roles in the invaluable democratic process.

It’s time for those of us — Democrats, Republicans and Independents — who care about our democratic institutions to take the threat in front of us seriously.

There are 26 secretary of state races across the country this year — and in some states, elections for county clerks and other local election officials as well. In numerous states from coast to coast, the Big Lie is on the ballot.

Rejecting misinformation, suppression and election tampering will take all of us. We urge you to get involved by supporting candidates who are committed to protecting our democratic institutions — donating your time or money if you’re able and, first and foremost, making your voice heard at the polls in both the primary and general elections in your state.

Our democracy simply cannot afford for any of us to sit out this fight.