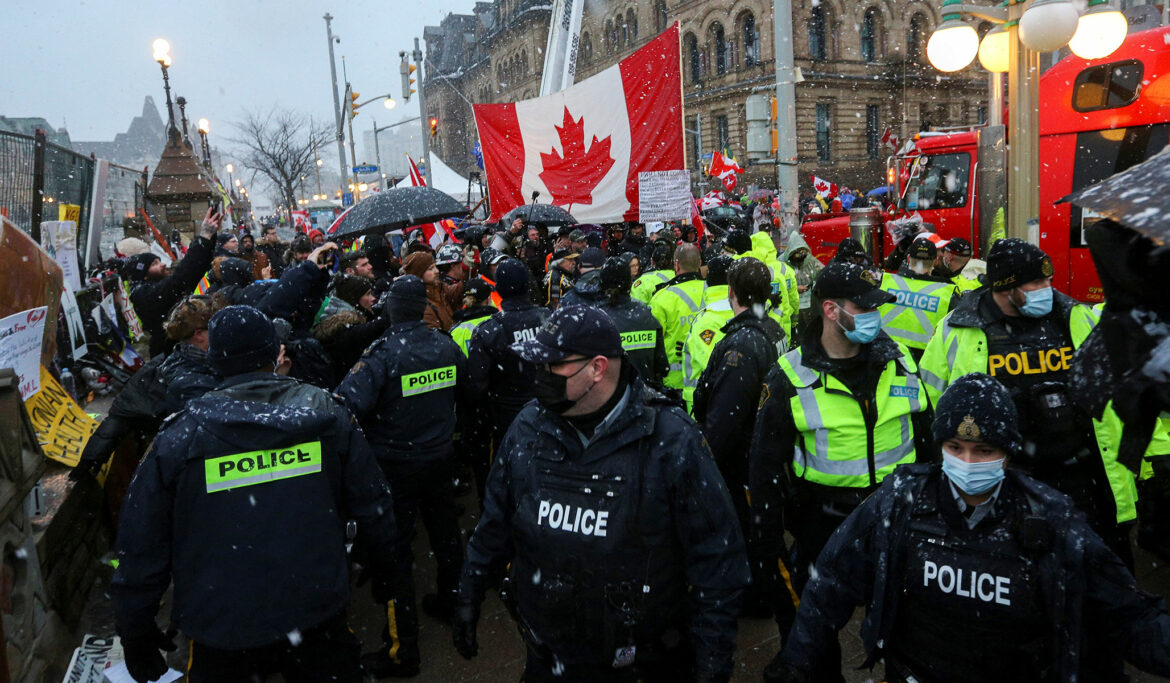 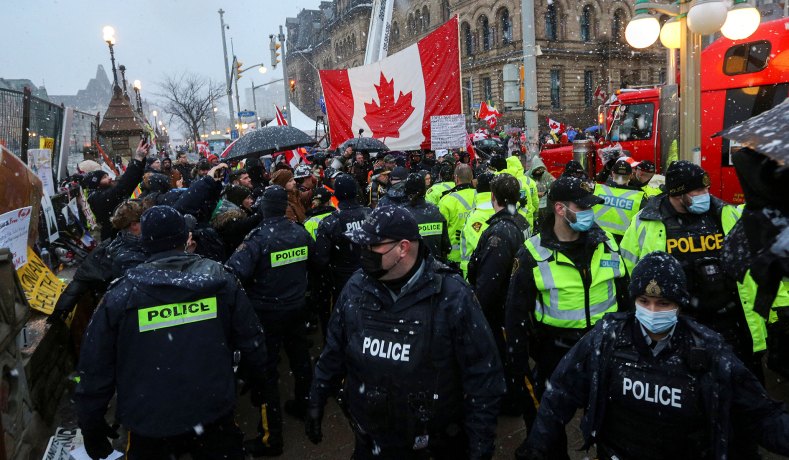 Ottawa police arrested multiple protesters with the “Freedom Convoy” on Thursday, including a key organizer of the movement that’s been rallying for weeks to pressure the Canadian government to drop the vaccine mandate for cross-border travel.

Authorities have taken Chris Barber, one of the leaders of the demonstration and a truck driver from Saskatchewan, into custody, CBC News reported. He is expected to face criminal charges. A video obtained by the outlet appears to depict Barber being placed in handcuffs and escorted away by police. Barber is also the target of a class-action lawsuit, along with fellow convoy organizers Tamara Lich and Benjamin Dichter, launched by a local resident who complained that the massive gathering was disrupting the community.

Barber’s detention comes after yellow-vested police officers distributed pamphlets to protesters earlier this week threatening to arrest those who didn’t leave the premises.

“Anyone blocking streets, or assisting others in the blocking streets are [sic] committing a criminal offense and you may be arrested,” Ottawa police said in a statement and in the fliers. “You must immediately cease further unlawful activity or you will face charges.”

Canadian prime minister Justin Trudeau recently invoked the 1988 Emergencies Act for the first time, which police noted “allows for the regulation or prohibition of travel to, from, or within any specific area” — meaning that officers are now considering anyone who joins the protest a violator of the law.

Interim chief Steve Bell assumed the role after former police chief Peter Sloly resigned this week amid the trucker havoc, which the latter called an “occupation.” Truckers have been accused of obstructing traffic and roads and creating a lot of noise for nearby neighborhoods, although few violent incidents have been reported.

Bell said at a press conference on Thursday that police are erecting checkpoints to secure the center of the city and cut off more truckers from joining the protest, encouraging those still remaining to leave peacefully.

“In the last few days we have been communicating with unlawful protesters. We have told them they must leave. We want to end this unlawful protest peacefully. We are prepared to employ lawful techniques to remove them from our streets,” he said.

In exercising its special emergency powers, Trudeau’s administration announced it would potentially cut off the financial pipelines of the truckers by freezing their accounts (including personal bank accounts and cyptocurrency transactions).

Canada’s deputy prime minister and minister of finance Chrystia Freeland said Monday, “As of today, a bank or other financial service provider will be able to immediately freeze or suspend an account without a court order. In doing so, they will be protected against civil liability for actions taken in good faith.”

On Wednesday, Canada’s justice minister David Lametti said the government could target supporters who have contributed money to the convoy.

“If you are a member of a pro-Trump movement who’s donating . . . you ought to be worried,” he said.