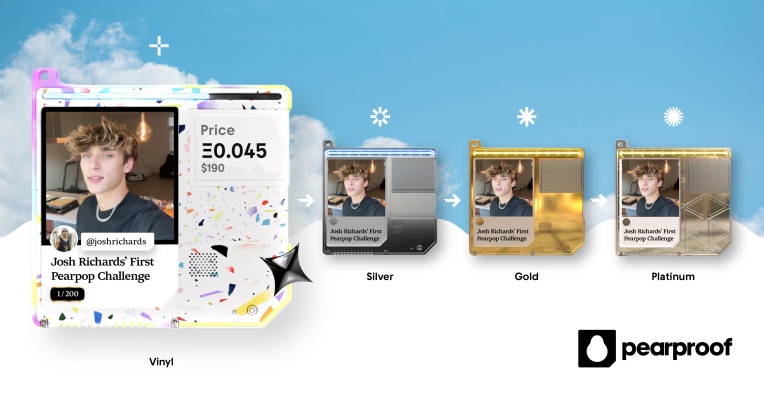 With big-name backers like The Chainsmokers, Alexis Ohanian, Mark Cuban and Snoop Dogg, Pearpop is launching Pearproof, a web3 app that allows creators to mint NFTs of their social media posts. This concept isn’t necessarily new — Cent helped Jack Dorsey sell the NFT of his first Tweet for the ETH equivalent of $2.9 million — but Pearproof’s NFTs use a proprietary algorithm that allows the assets to gain value as a post itself garners more social engagement.

“We wanted to create a platform or a format that allows us not only to establish ownership, but also to be able to actually link their web2 metadata to make the NFT dynamic,” said Ray Lee, the Chief Product Officer for both Pearpop and Pearproof.

These NFTs start off as at a “vinyl” level on a tier system that Pearproof developed. As it gets more popular, the NFT can “level up” to silver, gold, platinum and other levels. The creator can decide what rewards are associated with these levels — maybe an NFT reaching “silver” means that the owners will get access to a private Discord, for example.

“It’s about programming a way to unlock access to the creator or a private community,” Lee told TechCrunch. As owners of an asset connected to a creator’s success, fans will almost function like investors in a creator — they will want the creator to succeed because they have a direct financial stake in the creator’s success.

These kinds of features aren’t for everyone — for one thing, these tools also operate under the assumption that likes, comments and shares are what gives a social media post value. Not all creators are in it for the likes and shares — some creators strive to build closer relationships with a smaller set of followers, as opposed to seeking sheer viral fame. The success of Pearproof also relies heavily on a creator’s understanding of crypto, as well as their audience’s willingness to buy-in. With crypto scams and hacks aplenty, will the average consumer have trust in the longterm value of a social NFT? While these features might help a creator develop new ways to monetize, fans may be tempted to write this off as a money-grab, even if the creator is well-intentioned.

The project will leverage the Solana blockchain, which Pearproof chose for its low transaction costs and lesser environmental impact. Only the creators themselves can mint their own social posts as NFTs — Lee told TechCrunch that there will be “a lot of verification” to try to prevent fraud. When the NFT sells, the creator takes 90% and Pearproof takes 10%. Upon every subsequent transaction, the creator earns a 10% royalty.

Pearpop’s business model relies on external social platforms (“We are creator-centric and platform-agnostic,” Lee said). Outside of its burgeoning NFT business, Pearpop has grown since its 2020 launch by connecting fans with social stars from influencers like Sommer Ray and Vinnie Hacker to icons like Madonna and Lil Nas X. These celebrities can sell the chance to “duet” with them on TikTok (for someone like Snoop Dogg, a duet might cost you a few thousand dollars), or they can run “challenges” through Pearpop, inviting people to use a specific sound on a TikTok for the chance to win cash. Madonna’s team recently worked with Pearpop to distribute $20,000 for a challenge promoting her song “Frozen.”

“The NFT is going to be what represents that media that’s on web2, not the media itself,” Lee said. So, an NFT of a YouTube video might show just a few seconds on loop, rather than the entire video. “You’re buying a representation that unlocks the community for you, but you’re also helping drive streams to that particular video. That’s how we’re envisioning this.”

Another potential issue would arise if a competing startup employed the same idea — what does it mean for an NFT of a tweet to exist on both Cent and Pearproof? But Lee thinks that Pearproof’s proprietary algorithm, tying the asset dynamically to social engagement, sets their NFTs apart. Still, it could be risky for the NFT owner to not know how Pearproof might be impacted if a competing startup stole the spotlight (as with any investment… exercise caution!). Not only are these NFTs a bet on the success of the creator, but also, they’re a bet on the success of Pearproof.

At launch, Pearproof is working with TikToker Josh Richards and deadmau5, who is releasing exclusively music as a Pearproof NFT on February 15.