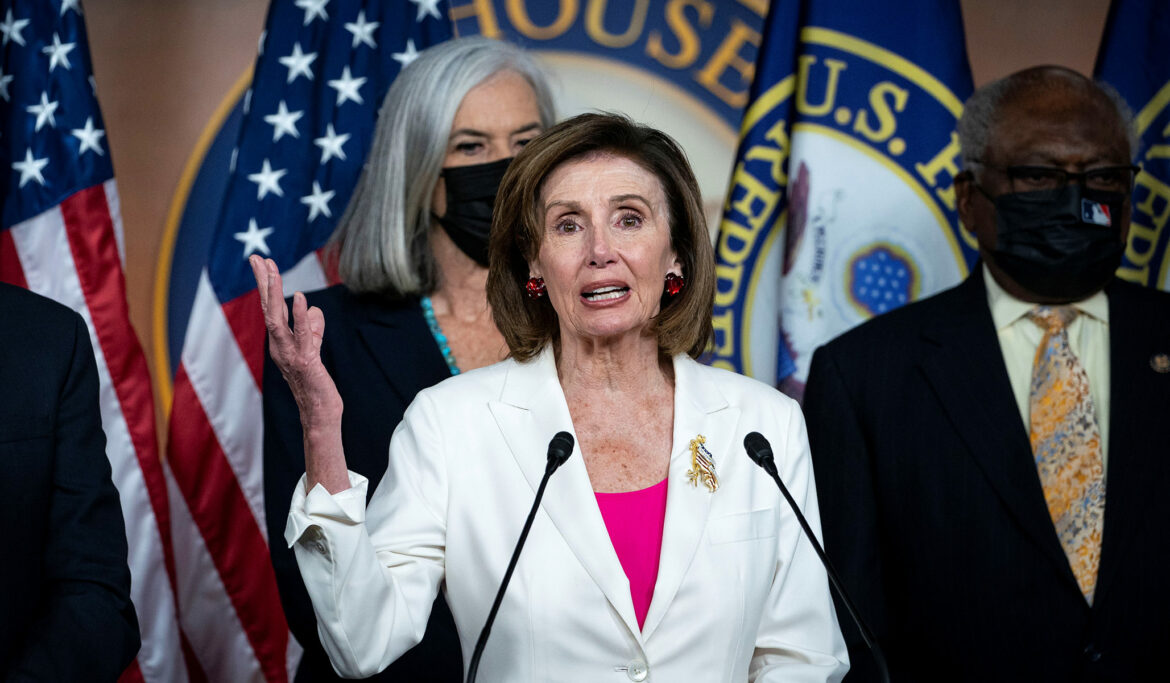 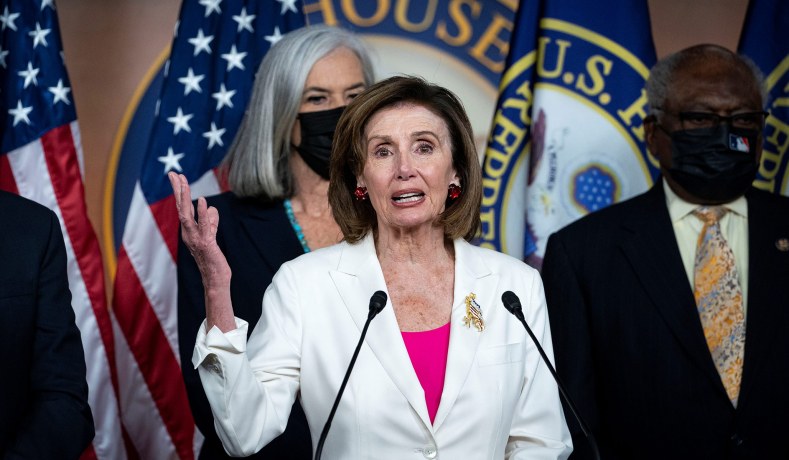 House Speaker Nancy Pelosi (D-CA) speaks during a news conference following the passage of the Build Back Better Act at the U.S. Capitol, in Washington, D.C. November 19, 2021. (Al Drago/Reuters)

Speaker Nancy Pelosi (D., Calif.) on Sunday claimed that “defund the police” is “not the position of the Democratic Party” after Representative Cori Bush (D., Mo.) recently endorsed the slogan.

“Well, with all the respect in the world for Cori Bush, that is not the position of the Democratic Party,” Pelosi said during an appearance on ABC’s This Week. “Community safety, to protect and defend in every way, is our oath of office. And I have sympathy — I — we’re all concerned about mistreatment of people.”

.@SpeakerPelosi says “defund the police” is “not the position of the Democratic Party” as lawmakers remains split over how to address crime.

“Community safety, to protect and defend in every way, is our oath of office.” https://t.co/sGomlyuTgq pic.twitter.com/ju7ebDFLnL

Pelosi touted the House-passed Justice in Policing Act, which would overhaul national policing standards, saying, “Make no mistake, community safety is our responsibility.”

The House speaker’s comments came in response to Bush’s statement last week that “‘defund the police’ is not the problem.”

“We dangled the carrot in front of people’s faces and said we can get it done and that Democrats deliver, when we haven’t totally delivered,” she said, adding that she tells her Democratic colleagues that if they had “fixed this” before she got there she wouldn’t have to “say these things.”

She added that she “absolutely” felt pressure from fellow Democrats to change her position, saying they have told her the phrase is not helpful for them with their own constituents.

Meanwhile, despite Pelosi’s claims, numerous Democrats have supported the “defund the police” movement in the years since George Floyd’s murder in 2020.

Members of the progressive “Squad” have all advocated for defunding or abolishing police.

Representative Ilhan Omar (D., Minn.) said in June 2020: “The ‘defund the police’ movement, is one of reimagining the current police system to build an entity that does not violate us, while relocating funds to invest in community services. Let’s be clear, the people who now oppose this, have always opposed calls for systematic change.”

In April 2021, Representative Rashida Tlaib (D., Mich.) called policing in the U.S. “inherently & intentionally racist,” saying she is “done with those who condone government funded murder.”

“No more policing, incarceration, and militarization. It can’t be reformed,” she said.

The same month, Representative Ayanna Pressley similarly said of policing in America: “We can’t reform this.”

Meanwhile, Vice President Kamala Harris was also sympathetic to the movement in June 2020 when she was asked by ABC’s George Stephanopoulos if she supports proposals to re-appropriate police funding, including a proposal in Los Angeles at the time to divert $150 million from the police budget into other community priorities.

“I support investing in communities so that they become more healthy and therefore more safe. Right now what we’re seeing in America is many cities spend over one-third of their entire city budget on policing. But meanwhile we’ve been defunding public schools for years in America, we’ve got to reexamine what we’re doing with Americans’ taxpayer dollars, and ask the question are we getting the right return on our investment? Are we actually creating healthy and safe communities?” Harris said at the time.