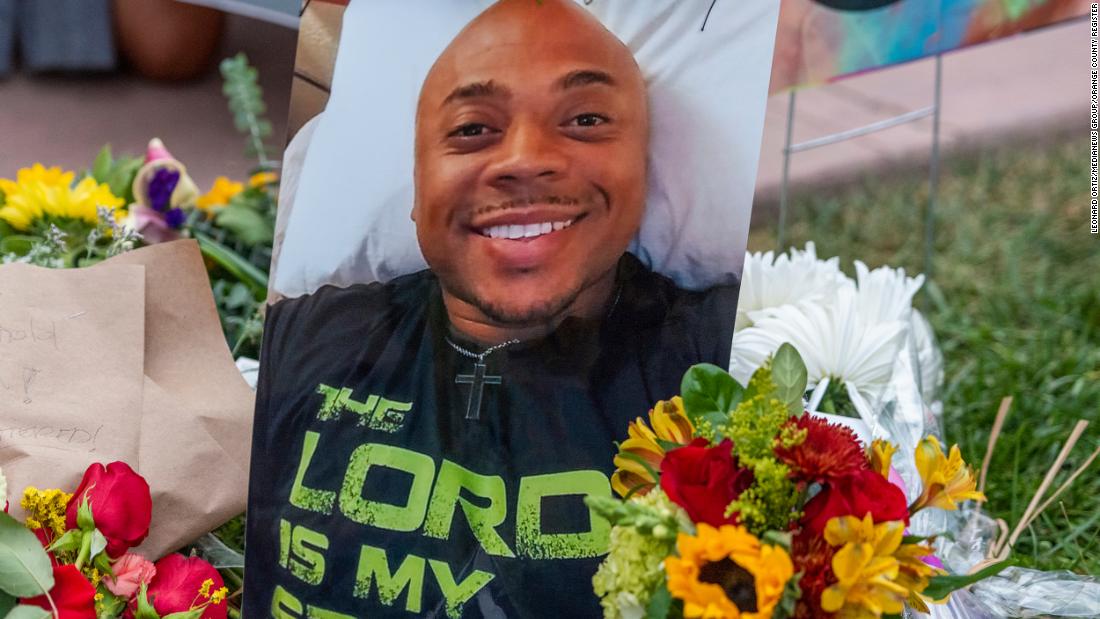 According to the letter, written by an Assistant District Attorney in the office’s homicide unit, the deputies gave statements to investigators six days after the shooting. The letter was approved and signed by Spitzer.

The two deputies who initiated the jaywalking stop in September were assigned as “homeless liaison officers” in San Clemente.

Sheriff’s department employees had offered services to Reinhold at least once in the 30 days before the shooting, Orange County Sheriff-Coroner Don Barnes said at the time. His family told local media Reinhold was in-and-out of homelessness.

The deputies’ interaction with Reinhold began with deputies sitting in their car in a parking lot near a four-lane road. Some of the conversation at the beginning of the audio is not intelligible, but the deputies discuss whether to stop the man at all.

The deputies turn their car out of the parking lot and pull up to where he’s standing, on the sidewalk. The officers are wearing microphones that capture some of the conversation with the man. One of the deputies asked him how he was doing, then one asked him to stop and get out of the street.

John Taylor, an attorney for Reinhold’s family, said at the time that deputies shouldn’t have stopped Reinhold in the first place. The prosecutor’s office reviewed the stop, and determined officers had cause to stop Reinhold, though not for “jaywalking,” as one deputy said, but for “walking against a red.” Taylor said the conclusion was “ridiculous.” Reinhold’s family has a lawsuit pending against the county.

“The DA bends over to create a new reason — (Reinhold) wasn’t jaywalking even though that’s what you hear deputies saying — so we’ll say they could have stopped him and detained him for (walking against a red). It’s ridiculous.”

In a press release Friday, Spitzer did not address the decision other than to say he “has released the investigation findings and legal conclusions.”

Police released a second video taken by someone recording the interaction with a cell phone. That video shows Reinhold and the deputies in front of a hotel about 220 feet north of the intersection where the stop began. It shows Reinhold walking in the street and contains parts of the same conversation that the dash cam captured.

In the cell phone footage, Reinhold is seen walking toward police in the street while police back up to the sidewalk, and then he walks back out into the street. The deputies followed the man as he moved toward and away from them, and one uses his extended arm to touch Reinhold with his hand as Reinhold walks away.

The cell phone video shows police trying to arrest him by grabbing his hands and as he’s turning away from police, trying to get control of his body to arrest him. Within a couple seconds, Reinhold and the two deputies are on the ground.

The person recording with his cell phone says, “I’ve got to get this on video.” While they’re trying to wrestle control of the man, one of the deputies shouts, “He’s got my gun.” Barnes has previously said the deputy said it four times.

A truck passed in between the person recording and the struggle across the street, obscuring the moment a deputy fired the first a shot. A second shot was fired a few seconds later. According to the letter from the prosecutor’s office, the deputy who shot Reinhold told him to “drop it or I’ll shoot” before firing the first shot into his torso, and shot him a second time after the other deputy said, “He’s still got my gun, shoot him again.”

Taylor, the attorney for Reinhold’s family, who also watched the videos, in February 2021 disputed that Reinhold grabbed the gun. He said Reinhold was pushing against the officers to escape an arm hold that officers put him in after making a stop they shouldn’t have.