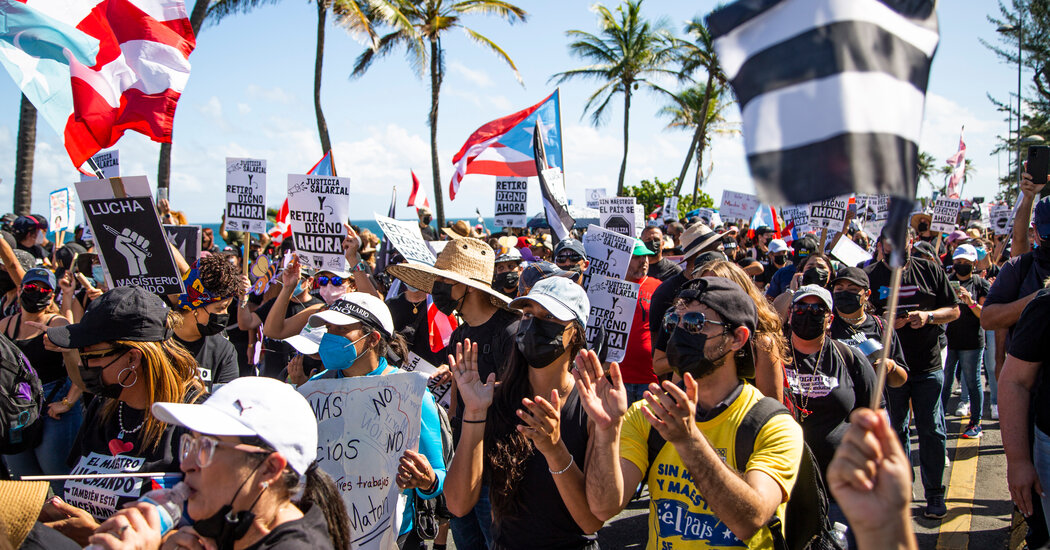 SAN JUAN, P.R. — In Puerto Rico, the base pay for public-school teachers is $1,750 a month — a figure that has not increased in 13 years and has forced Jessica Colón Cartagena, a special-education teacher, to tutor students and run a catering business with her husband to make ends meet.

“They don’t value us,” she said. “We don’t mean anything to politicians.”

So on Wednesday, Ms. Colón, 40, did not go to work in her school in Cayey, a mountain town in central Puerto Rico. Instead, she went to San Juan, the capital, and joined thousands of other teachers, firefighters and labor union members demanding better pay for public workers as Puerto Rico tries to pull itself out of the huge bankruptcy that has strained daily life on the island.

Frustrated by years of low wages and high utility rates, and now also by rising consumer prices and housing costs, government employees led by teachers have pressured Gov. Pedro R. Pierluisi to find ways around the annual budget set by a federally appointed fiscal board that has overseen Puerto Rico’s finances since 2016.

“We are here for wage justice,” Ms. Colón said. “We work very hard. There’s a bunch of teachers leaving.”

The growing discontent comes just weeks after a federal judge approved Puerto Rico’s debt restructuring plan, which is intended to put the island on a path to repay creditors at a discounted rate and grow the economy. But critics fear that future financial pain is inevitable. The oversight board has approved modest wage hikes for various public workers — including teachers, firefighters, correctional officers and police officers — but said the government must raise taxes or find savings elsewhere in the budget to accommodate larger pay increases.

The situation for public workers has felt fraught throughout Puerto Rico’s decade of economic crisis and debt restructuring. About 23 percent of the nonfarm work force is employed by the public sector, according to the U.S. Bureau of Labor Statistics.

Like public employees elsewhere, workers had accepted lower wages in exchange for higher benefits. But many of those benefits diminished or were lost in the face of financial turmoil, leaving workers with little faith that they would not have to accept further cutbacks as Wall Street creditors start getting repaid again. The debt restructuring plan further reduced teachers’ retirement benefits.

“They find $7 billion for the bondholders,” said José N. Tirado, president of the firefighters’ union. “While first responders are living in poverty.”

Firefighters make a base salary of $1,500 a month, a figure that has not changed in 22 years, Mr. Tirado said, making it a challenge to recruit and retain employees. Many firefighters work in poor conditions in stations severely damaged by Hurricane Maria in 2017 and a flurry of earthquakes in December 2019 and January 2020.

So many firefighters have left the profession — or moved to the mainland, where their salaries are much better — that Puerto Rico’s fire department has more than 400 vacancies, Mr. Tirado said, in what should be a work force of about 1,400. Police officers and health care workers have also emigrated in droves. The island’s population declined 11.8 percent from 2010 to 2020 and is now about 3.3 million.

Lt. Víctor Lasalle Acevedo, a firefighter in the town of Aguadilla, said he would like to retire in five years, when he is 55, after 33 years of service. But he might not be able to afford it.

For now, Mr. Pierluisi has found a temporary workaround: On Monday, he offered teachers raises of up to $1,000 a month, beginning on July 1, to be paid for by federal funds that extend until 2024. He said he would like to find a way to make the raises permanent. On Thursday, Mr. Pierluisi offered firefighters a raise of $500 a month, also beginning on July 1, funded by federal dollars that would expire in 2026.

The promise of temporary raises for teachers earlier in the week, however, did little to quell the deepening unrest. Some of the frustration began to build after a teacher named Pablo Mas Oquendo died on Feb. 1 in a car crash as he was leaving his night job as a security guard. He is thought to have fallen asleep from the exhaustion of working three jobs.

Mr. Pierluisi’s announcement followed a wave of absenteeism — a “red flu” — of teachers walking off the job in protest. Other public workers, including firefighters, began to follow suit. There was chatter that even the police might join.

Faced with the prospect of losing public safety personnel to a widespread work stoppage, Mr. Pierluisi said on Monday that no one was “obligated” to be a police officer or a firefighter and should consider other jobs if they were unhappy.

Those remarks did not sit well with many Puerto Ricans, who took them as insulting to chronically underpaid workers. Asked on Tuesday if he regretted his comment, Mr. Pierluisi said no.

“Walking off the job is shirking one’s duty, unless one is really sick,” he said. “That is not all right. There is no justification; one can protest and march outside of work hours.”

By Wednesday, the day of the biggest protests so far, only 18 percent of teachers showed up to work, according to the Puerto Rico Department of Education. Forty-two of the island’s 96 fire stations shut down in protest, Mr. Tirado said. Some teachers intended to remain off the job on Thursday. A national stoppage is being planned for Feb. 18.

Mr. Pierluisi extended the temporary raises to also include school principals, regional superintendents and other administrators. On Thursday, he met with labor leaders and said he would sign off on raising the base teacher pay by about half, to $2,700 a month, and reintroducing a pay scale offering higher salaries for teachers with postgraduate degrees. Teachers’ unions have been seeking a base salary of $3,500 a month.

Workers plan to keep the pressure on the government, seeing that it has yielded some results. But they worry that their working conditions are untenable in the long run.

“I want to stay in my country,” said Mónica Pérez Santiago, a 26-year-old elementary teacher from Guaynabo. “It will be sad if in 30 years, things are still the same.”