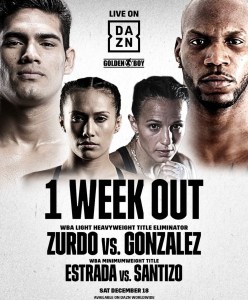 Gilberto “Zurdo” Ramirez and Yunieski Gonzalez will step into the ring on Saturday at the AT&T Center in San Antonio, Texas, for their World Boxing Association (WBA) light heavyweight eliminator fight.

The fight will be the feature bout of the Golden Boy Promotions event, which will also feature Seniesa Estrada defending her WBA minimum belt against Maria Micheo Santizo in her back-up.

Ramirez, 30, is one of the biggest names at 175 pounds. Previously a world champion at super middleweight, he moved up a division in 2019 in pursuit of a crown at the higher weight.

The Mexican comes from knocking out veteran Sullivan Barrera last July 9 and looks in great condition for his upcoming bout this Saturday.

Gonzalez, on the other hand, is 36 years old and is facing a great opportunity for him. The Cuban is looking to fight for a world title for the first time, but first he must beat Ramirez in a complicated fight.

The pre-fight press conference will be held this Thursday and the weigh-in will take place on Friday. Ramirez is undefeated in 42 fights, with 28 knockouts, while Gonzalez has 21 wins, 3 setbacks and 17 knockouts.