It’s no secret that Rick and Morty has no love for mainstream superhero content, and that point was made perfectly clear in its response to Marvel’s ‘90s costumes. Fans of the Adult Swim series know that Rick and Morty has always been critical of superheroes, including and especially Marvel from the constant jabs at the quality of MCU films to mocking the fictional characters themselves. It seems Rick and Morty’s apparent disdain for superheroes transcends its animated show and into its own comic series where they encounter a familiar team of heroes with a lot of criticism to offer.

In Rick and Morty Presents: The Vindicators #1 by J. Morty is overjoyed to receive the call from the Vindicators but Rick doesn’t care either way and agrees to help them only to prove himself as the most capable out of them all. However, just because Rick is going to help them doesn’t mean he isn’t going to be a complete jerk to them the whole time, which includes him pointing out an aspect of their costumes that is reminiscent of those worn by Marvel’s superheroes in the ‘90s.

Rick critically points out the fact that one of the Vindicators, Crocubot, has a bunch of pouches on his costume now as the team has undergone some aesthetic changes since the last time Rick and Morty saw them. The best examples of excessive pouches were displayed by Deadpool and Cable, but they were created in the late ‘80s and hit max popularity in the ‘90s so their pouches were a part of their original costumes. An example of a character changing their costume to fit into the era of superhero pouches, just as Rick and Morty‘s Crocubot apparently had done, was Spider-Man with Peter Parker’s more hardcore clone Ben Reilly sporting the Scarlet Spider costume that literally had ankle pouches. 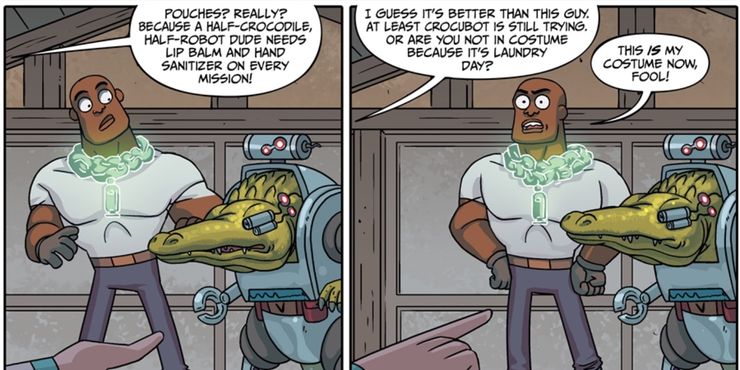 This costume-callout from Rick and Morty isn’t the first time they’ve shone a negative light on the superhero genre, especially when it comes to the Vindicators. In the Rick and Morty season 3 episode titled “Vindicators 3: The Return of Worldender,” Rick spends the entire episode ridiculing them for being superheroes and by extension mocking the entire superhero genre as a whole.

While Rick and Morty has proven it will be the first to call out something it thinks is stupid about superheroes, pointing out the pointlessness of costume pouches is one that fans of superheroes can actually agree with. All fans know is that the pouches were excessive and bulky and many preferred they not be there at all. Rick and Morty calling out the pointlessness of costume pouches is the perfect response to Marvel’s ‘90s superhero suits.