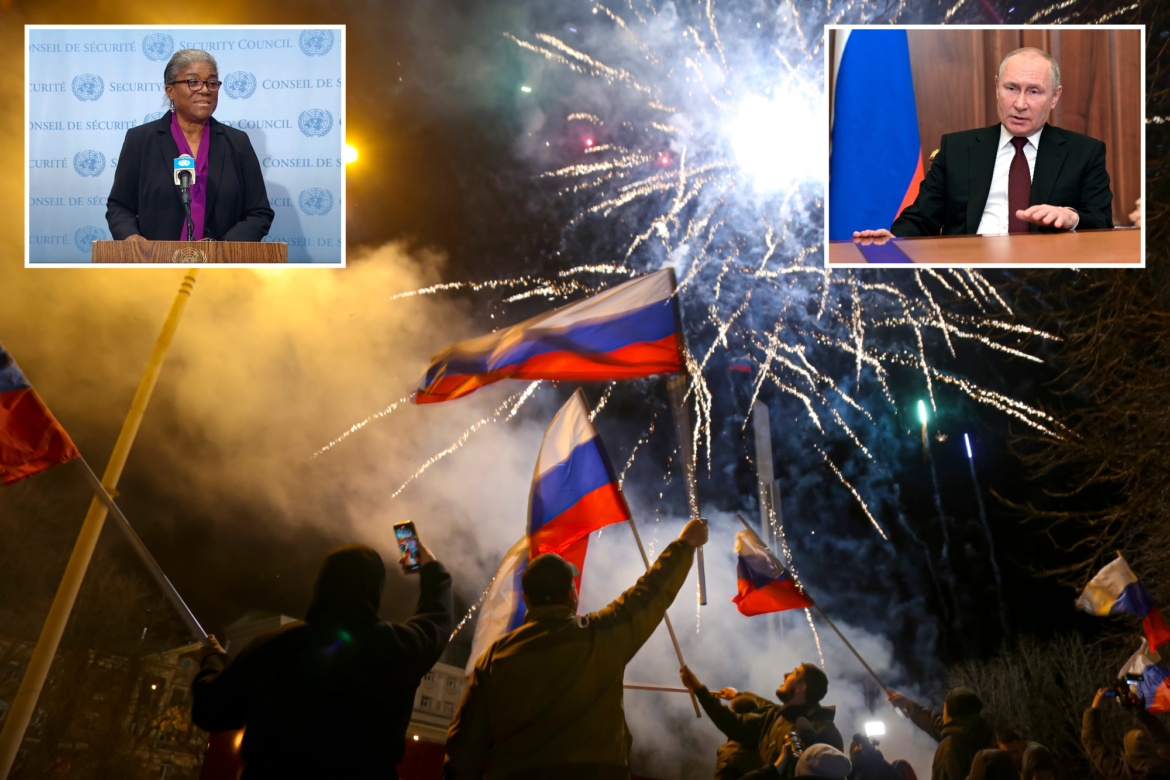 MOSCOW/DONETSK, Feb 22 – The United States and its European allies are poised to announce harsh new sanctions against Russia on Tuesday after President Vladimir Putin formally recognized two breakaway regions in eastern Ukraine, escalating a security crisis on the continent.

The Ukrainian military said two soldiers were killed and 12 wounded in shelling by pro-Russian separatists in the east in the past 24 hours, the most casualties this year, as ceasefire violations increased.

France and Germany also agreed to respond with sanctions, and Britain and the United States said they would announce further measures on Tuesday.

“The United States will impose sanctions on Russia for this clear violation of international law and Ukraine sovereignty and territorial integrity,” Linda Thomas-Greenfield, U.S. ambassador to the United Nations, told reporters after an emergency meeting of the Security Council late on Monday.

“We can, will, and must stand united in our calls for Russia to withdraw its forces, return to the diplomatic table and work toward peace.”

Britain said it had drawn up sanctions to target those complicit in the violation of Ukraine’s territorial integrity, and those measures would come into force on Tuesday.

China called for all parties to exercise restraint while Japan said it was ready to join international sanctions on Moscow in the event of a full-scale invasion.

A Reuters witness saw tanks and other military hardware moving through the separatist-controlled city of Donetsk on Monday hours after Putin formally recognized the breakaway regions and ordered the deployment of Russian forces to “keep the peace.” No insignia were visible on the vehicles. 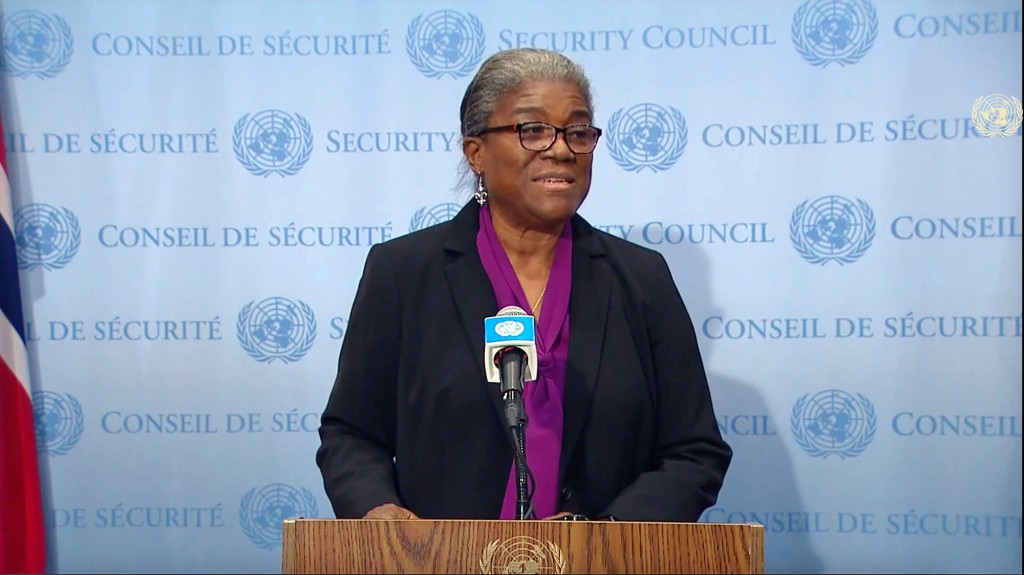 U.S. Ambassador to the United Nations Linda Thomas-Greenfield makes a statement after an emergency U.N. Security Council meeting on Ukraine.AP

Ukraine’s military said on its Facebook page it had recorded 84 cases of shelling by separatists who it said had opened fire on about 40 settlements along the front line with heavy artillery, in breach of ceasefire agreements.

Russia denies any plan to attack its neighbor, but it has amassed troops on Ukraine’s borders and threatened “military-technical” action unless it receives sweeping security guarantees, including a promise that Ukraine will never join NATO.

A senior U.S. official said the deployment of Russian troops to the breakaway enclaves did not merit the harshest sanctions the United States and its allies had prepared in the event of a full-scale invasion, as Russia already had troops there.

Russian-backed separatists in Ukraine’s Donetsk and Luhansk regions – collectively known as the Donbass – broke away from Ukrainian government control in 2014 and proclaimed themselves independent “people’s republics.” 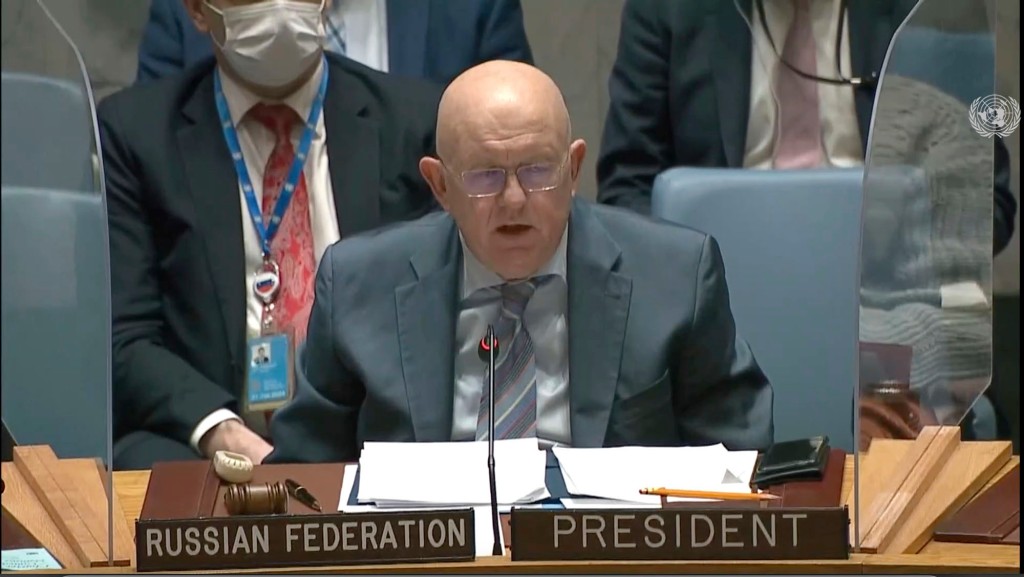 Russia needed to ratify its friendship treaties with the two breakaway regions before it could discuss matters like the exact borders of the territories, RIA news agency reported, citing the foreign ministry. Russia’s parliament is expected to review friendship treaties on Tuesday.

Ukrainian President Volodymyr Zelenskiy, who received a call from Biden to express solidarity on Monday, accused Russia of wrecking peace talks and ruled out territorial concessions.

Rising fears of a major war in Europe pushed oil prices to a seven-year high on Tuesday, while safe-havens currencies like the yen rallied and global stocks tumbled. The rouble extended its losses as Putin spoke, at one point sliding beyond 80 per dollar. 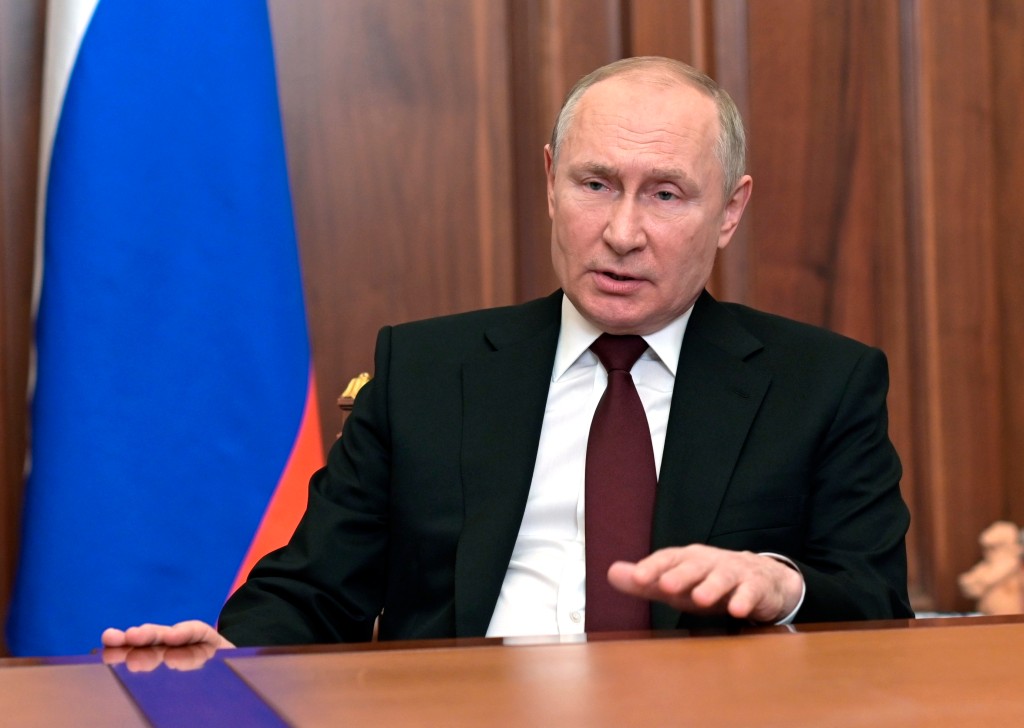 Russian President Vladimir Putin addresses the nation in the Kremlin in Moscow.AP

In a lengthy televised address on Monday packed with grievances against the West, a visibly angry Putin said eastern Ukraine was ancient Russian land.

Putin delved into history as far back as the Ottoman empire and expressed frustration that Russia’s demands for a rewriting of Europe’s security arrangements had been repeatedly rebuffed.

Putin has for years worked to restore Russia’s influence over nations that emerged after the collapse of the Soviet Union, with Ukraine holding an important place in his ambitions. Russia annexed Crimea from Ukraine in 2014.

A French presidential official said the speech “mixed various considerations of a rigid and paranoid nature.”