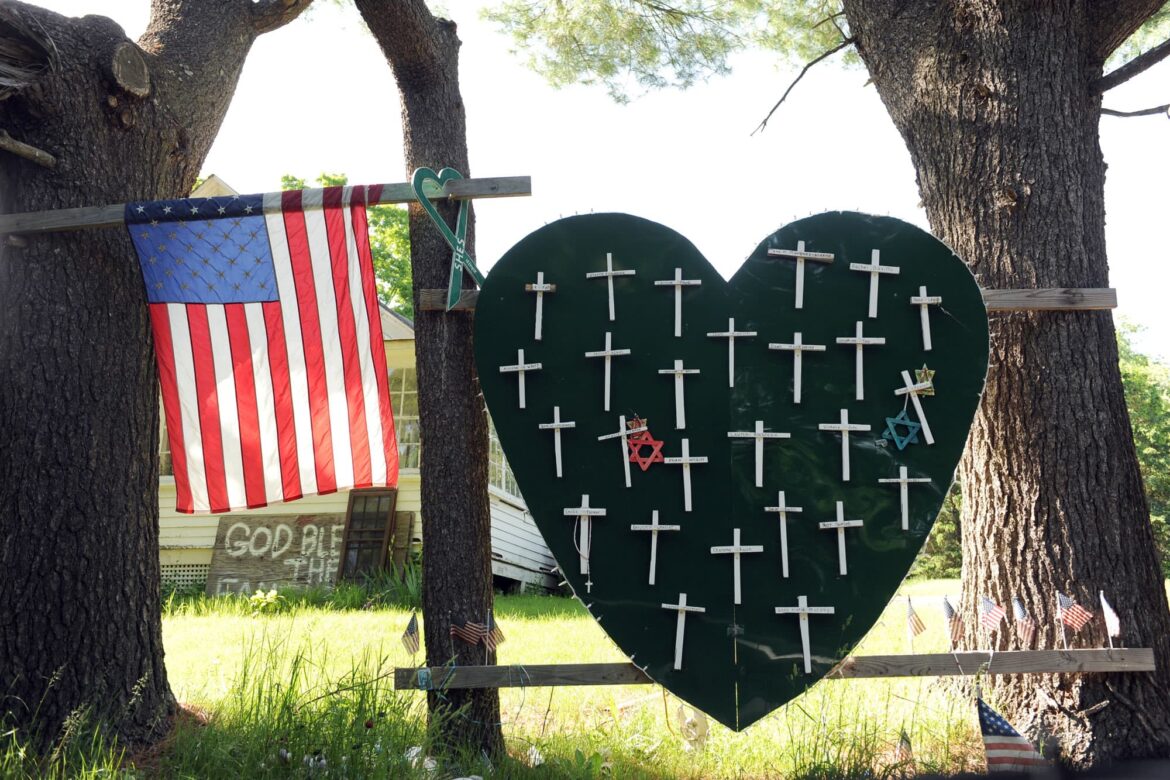 The families of some of the adults and children killed in the 2012 mass shooting at Sandy Hook Elementary School reached a $73 million settlement Tuesday with Remington, the manufacturer of the AR-15 rifle used in the massacre.

The settlement agreement also allows the families to make public thousands of pages of “internal company documents that prove Remington’s wrongdoing,” attorneys for the plaintiffs said in a press release.

“This victory should serve as a wake up call not only to the gun industry, but also the insurance and banking companies that prop it up,” said the families’ attorney, Josh Koskoff, in the release.

On Dec. 14, 2012, 20-year-old Adam Lanza broke into the elementary school in Newtown, Connecticut, and, wielding a Remington Bushmaster semiautomatic rifle, killed 20 students and six adults in less than five minutes.

Mary D’Avino and Hannah Miranda, the mother and sister of Rachel D’Avino, a Sandy Hook Elementary School shooting victim, hold a photo of her as they pose for a portrait following a press conference to announce a settlement with Remington Arms in Trumbull, Connecticut, U.S., February 15, 2022.

Nine victims’ families sued in 2014, alleging Remington bore some responsibility for the massacre through its marketing of the weapons. Remington had offered to settle for nearly $33 million last summer, but the families refused to accept.

“My beautiful butterfly, Dylan, is gone because Remington prioritized its profit over my son’s safety,” Nicole Hockley, whose son Dylan was killed in the shooting, said in the press release.

“My hope is that by facing and finally being penalized for the impact of their work, gun companies, along with the insurance and banking industries that enable them, will be forced to make their business practices safer than they have ever been,” Hockley said.

“Our legal system has given us some justice today, but David and I will never have true justice,” said Francine Wheeler, the mother of Ben, who was killed in the massacre. “True justice would be our fifteen-year-old healthy and here with us. But Benny will never be 15. He will be 6 forever because he is gone forever. Today is about what is right and wrong.”

An attorney for the defendants did not immediately respond to CNBC’s request for comment on Tuesday’s settlement.

President Joe Biden, who was vice president at the time of the Sandy Hook massacre, hailed the settlement.

“While this settlement does not erase the pain of that tragic day, it does begin the necessary work of holding gun manufacturers accountable for manufacturing weapons of war and irresponsibly marketing these firearms,” the president said in a statement issued Tuesday evening.

“Together, we can deliver a clear message to gun manufacturers and dealers: they must either change their business models to be part of the solution for the gun violence epidemic, or they will bear the financial cost of their complicity.”

The settlement was first announced Tuesday morning in a filing in Connecticut Superior Court. The families asked the court to set a schedule to hash out the final steps required of them before the case can be withdrawn.

The NRA-backed Protection of Lawful Commerce in Arms Act, which passed Congress and was enacted in 2005, has long shielded gun manufacturers and dealers from liability for how their products are used.

Law firm Koskoff, Koskoff & Bieder said they were able to circumvent that law’s sweeping protections by arguing that Remington’s “aggressive and violence-glorifying marketing of its AR-15s was an unfair trade practice” in violation of Connecticut law.

“Before we brought this case, gunmakers thought they could not be held accountable for mass shootings. This case shows they can be,” Alinor Sterling, partner at Koskoff, said in the firm’s press release.

The Sandy Hook massacre rocked the nation. Former President Barack Obama, who openly wept on the day of the shooting, has called his visit to Newtown in the wake of the killings “the toughest day of my presidency.”

Months later, the Senate rejected a plan to expand background checks on gun sales, prompting Obama to rage at the gun lobby and decry the “shameful day for Washington.”

More than 45,000 people died from gun-related injuries in 2020, the most recent year for which that data is available, according to the Centers for Disease Control and Prevention.

Last year, New York passed a law that cleared the way for gun manufacturers and dealers to be sued for creating a “public nuisance,” that harms people’s safety and health. Several gun industry groups have filed a suit challenging the law.