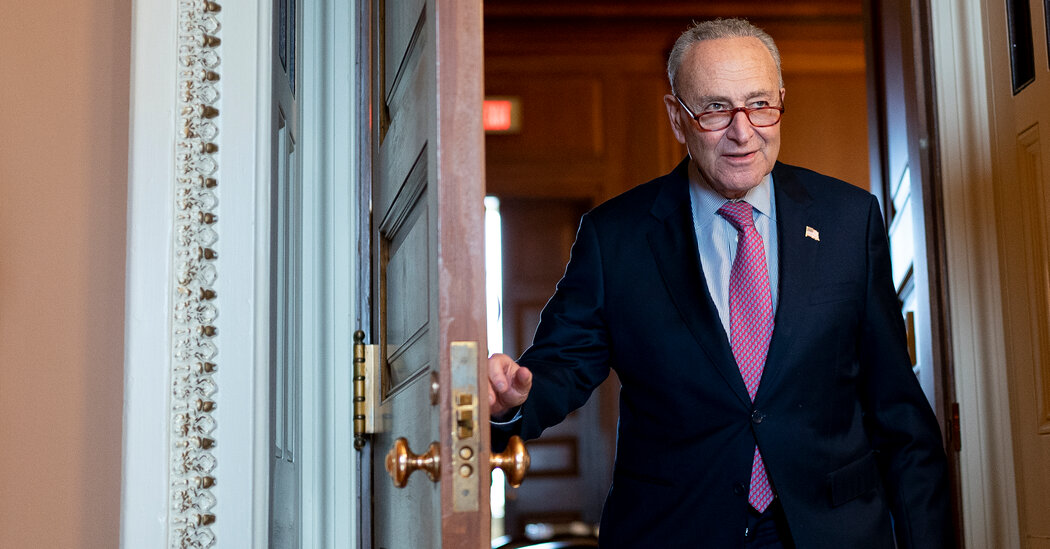 WASHINGTON — Senator Chuck Schumer of New York, the majority leader, vowed on Monday to press forward with votes on a revised version of President Biden’s $2.2 trillion marquee climate, tax and spending plan, less than a day after a Democratic holdout in the Senate announced he could not support the legislation as written.

Mr. Schumer’s announcement came after the senator, Joe Manchin III of West Virginia, announced in a televised Sunday interview that he would not support the expansive domestic policy plan after months of laborious one-on-one negotiations with the president, dooming the plan in its current form.

But Mr. Schumer’s pledge to move forward with a revised package, known as the Build Back Better Act, underscored how Democrats were unwilling to abandon their top piece of domestic policy legislation, despite Mr. Manchin’s warning on Sunday that “I can’t get there. This is a no.”

The promise was yet another unusually personal statement toward Mr. Manchin, whose intransigence has thwarted several Democratic ambitions this year, as Mr. Schumer acknowledged “moments of deep discontent and frustration” that Mr. Manchin and Mr. Biden had not yet bridged their differences over the package to fulfill a Christmas deadline Mr. Schumer tried to impose.

“Neither that delay, nor other recent pronouncements, will deter us from continuing to try to find a way forward,” Mr. Schumer wrote. “We simply cannot give up.”

Votes on the plan would come in early 2022, Mr. Schumer pointedly noted in a letter to his colleagues, “so that every member of this body has the opportunity to make their position known on the Senate floor, not just on television.”

Mr. Schumer also announced another planned attempt to pass a voting rights overhaul, an effort that fizzled just before t senators on Saturday left Washington for the remainder of the year.

He warned that if Republicans again filibuster the legislation, the chamber would consider a rules change to begin debate on the plan. At least two Democratic senators, Mr. Manchin and Senator Kyrsten Sinema of Arizona, have remained opposed to chipping away at the 60-vote threshold typically needed to advance legislation. Democrats would need their support to change the rule.