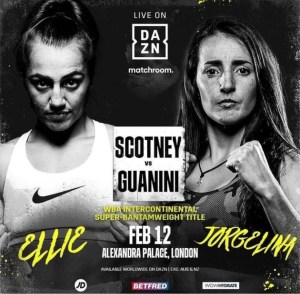 British Ellie Scotney will get her first professional title shot when she faces experienced Argentinean Jorgelina Guanini next Saturday for the World Boxing Association (WBA) Intercontinental super bantamweight belt at the Alexandra Palace in London, England.

The fight will be included in the Matchroom Boxing event, which will have Daniel Jacobs and John Ryder facing each other in the WBA super bantamweight eliminator in the main event.

Scotney is 23 years old and has shown great tools in her three professional fights so far. The local fighter has made six and eight round fights, but now she will have the opportunity to make her first 10 round fight and with the black belt and another vacant belt at stake.

It won’t be easy against Guanini, who is a former super flyweight world champion and has more experience. She has fought good opponents, even at higher weights, and wants to surprise to get back to winning ways.

Scotney comes into the fight with 3 wins without defeat and Guanini has 9 wins, 3 losses and 2 draws.