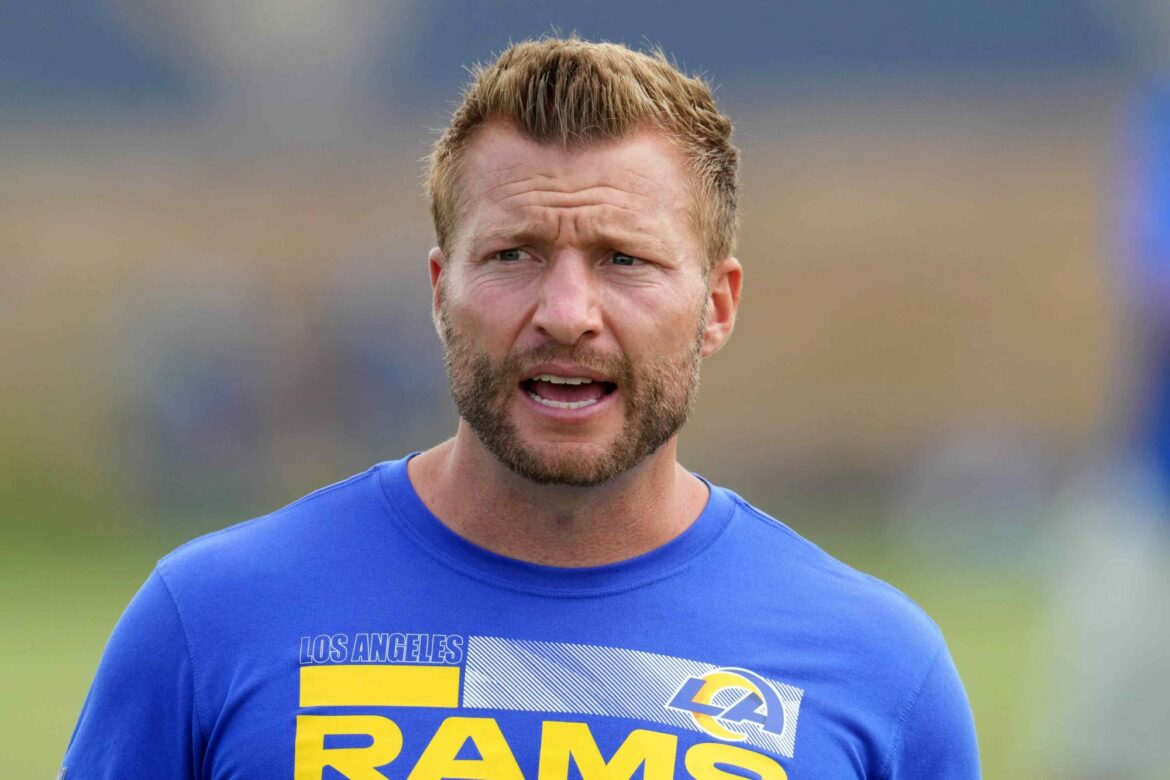 The Los Angeles Rams have a host of issues right now, but is head coach Sean McVay one of them? It largely depends on who you ask.

Is Sean McVay one of the problems facing the Los Angeles Rams?

Some within the league think so. Others feel that’s the furthest thing from reality.

Speaking with five different sources — four of whom have worked with McVay during his time in the NFL — the general tone is one of adoration and appreciation, with one criticism being brought up from some corners.

“Sean is very, very intelligent and articulate, very good talking in front of people and players. But the bottom line is he’s soft,” said a source who spent multiple years sharing an NFL building with McVay. “… In that (Green Bay) playoff game, I know he was hurt, but Aaron Donald could come out whenever he wanted to. He was on the sideline in the third and fourth quarter. McVay doesn’t bat an eye at that stuff. It becomes an environment where it’s not do-or-die, it becomes about yourself. … I think that’s why players like playing for him, because it’s soft.”

Zac Taylor, who coached alongside McVay for two seasons as an offensive assistant before becoming the Cincinnati Bengals head coach in 2019, bristles strongly at the criticism.

“I worked there two years I don’t know anybody I’ve worked with who would say something bad about Sean,” Taylor said. “He’s one of the best people I’ve been around, it was the greatest experience. … He’s a special human being.”

The sentiment was echoed by Jedd Fisch, who also coached two years (2018-19) under McVay as an offensive assistant with the Rams before taking on his current role as the University of Arizona head coach.

“I would say he’s an elite coach and an elite leader,” Fisch texted to FanSided on Thursday. “He understands all phases of football, and more importantly understands people and gets the absolute best out of them. I drove in every day wanting to make sure I did my job to the best of my ability as I always knew that Sean was the standard.”

“Sean is the most open, clear communicator I’ve ever been around,” added Liam Coen, another former offensive assistant who worked three years under McVay before becoming the offensive coordinator at the University of Kentucky this spring. “His ability with the players to gauge them, communicate and be open with them, about the program, the organization and decisions, things that are important —  maybe some could misconstrue that with soft, but I think that’s why he is who he is, and the players have so much respect for him.”

McVay, 35, is in his fifth year as the Rams head coach. Over the first four, he’s reached the playoffs three times, going to the Super Bowl in 2018. His career regular-season winning percentage of .667 (50-25) ranks 14th all-time for any coach who has at least 50 decisions.

Of the 13 men above him, only Tommy Hughitt, who coached the Buffalo All-Americans from 1920-24, is without a title.

In many respects, McVay has an argument as one of the league’s premium coaches, including from an analytics perspective.

Los Angeles ranks fourth in offensive DVOA and ninth defensively this year. The Rams also rank first in the NFL for late and close offense, and second in second-half offense.

Taylor, who is enjoying a breakout year with his young Bengals, believes some of what he learned under McVay in Los Angeles speaks to why his mentor is so good in those situations.

“Fronts and coverages, especially on first and second down, using formations and motions to give the quarterback plenty of info,” Taylor said. “I think he’s top-notch at game-planning that way and using that information in-game to his advantage.”

In McVay’s four-plus years as the Rams coach, they’ve never finished worse than 12th in DVOA, and twice were in the top three.

Yet each season under McVay, Los Angeles has struggled to maintain its level of play down the stretch. Not once has the Rams’ record improved by win percentage after their bye week. Overall — not including 2021 — Los Angeles has a .735 win percentage before its break before declining to a .600 mark. The reasons can be debated, but reality says the Rams peak early and slowly fade as the shadows grow long.

I have no idea what to make of this, but here’s the progression of Goff/Stafford throughout each Sean McVay season.

How to read the figure: each point is a QB’s EPA/play through a given week (i.e., including all games up to that week) pic.twitter.com/my4KXbVbAR

One well-traveled talking point circling McVay is the lack of a varied gameplan and scheme which, as the year goes on, makes Los Angeles easier to defend. It’s a talking point those who have been around McVay don’t believe.

“I don’t know who would drive that narrative that it’s a simple playbook,” Taylor said. “Certainly enough to win games, enough core principles to serve them well for the past five years.”

While it’s admittedly a tiny sample size, the Rams have played two games in which the game-time temperature was 35 degrees or less. In both contests — 2018 against the Chicago Bears and last year’s Divisional round facing the Green Bay Packers — the Rams lost by multiple scores.

Speaking to the criticism of McVay and his team being soft, the source who worked alongside McVay used last week’s canceled practice as an example.

“… They didn’t practice (last Thursday) because the wind was blowing too hard, so they had to have a walkthrough,” said the initial source who worked with McVay. “Are you fucking kidding me? You’re going to play in that shit.”

However, going after McVay for this specific issue might not be fair.

The Rams are one of three NFL teams who are without an indoor practice facility, and the only one stuck dealing with the fierce Santa Ana winds in Southern California. Additionally, this isn’t the first time McVay has been forced to cancel or scale back practice due to legitimate weather issues. In 2018, he did the same before playing and subsequently beating the Seattle Seahawks, 36-31.

So then, what is true? Are there concrete reasons McVay and his team have slid some as seasons have progressed, or is it the NFL reality many teams face including injuries, bad fortune and tough schedules? Maybe we don’t have enough data yet to answer the question.

After all, Mike Tomlin, Andy Reid and Sean Payton are seen as elite coaches. Yet Tomlin has won three playoff games since 2011. Payton’s Saints have reached the NFC Championship Game once since Super Bowl XLIV, famously losing a controversial game to McVay. Reid didn’t win a championship over his first 20 seasons as a head coach before breaking through in 2019.

We’ve also seen each man in that trio for at least 15 years. McVay is only beginning his career, and by all the numbers if off to a terrific start.

The problem for McVay might be the perception of his being a young genius, a moniker that brings with it the most unrealistic of expectations. When those labels are tossed around, and the ultimate success isn’t immediately achieved, criticism comes quick.

“As a coach, I think he’s gotten away from his roots,” a former NFL general manager and longtime personnel executive texted to FanSided. “No run, dependent on big plays. Team lacks depth and is soft up front but I think most see that.”

And, with general manager Les Snead’s all-in moves, the Rams are correctly expected to win now.

Los Angeles is sans a first-round pick for the next two years, and hasn’t selected in the top 32 choices since moving up for Jared Goff in 2017. Of course, Goff was moved with the aforementioned picks to the Detroit Lions for Matthew Stafford, who has been an upgrade but arguably not the supercharger many hoped for.

Additionally, the Rams traded their 2022 second- and third-round selections to the Denver Broncos in October for edge rusher Von Miller, leaving them without a top-100 pick. While there’s time to make an impact, Miller has missed a game and recorded no sacks in the other two during his month in Los Angeles.

The Rams also signed star receiver Odell Beckham Jr. on Nov. 11, and in two games has produced seven catches for 99 yards and a touchdown before sustaining a hip injury, keeping him out of practice this week.

“When you get a new talent such as Odell, without that chemistry yet, just as a quarterback, you might start looking in that direction when you might not normally,” Coen said. “I think that’s very natural for some of the chemistry to be off right now when you bring in such a talented playmaker like Odell. It might take a little bit of time to build that chemistry.”

At 7-4, Los Angeles is a playoff team that projects to be a dangerous one. McVay has a chance to make a run, and with it cement his status as one of the league’s pillars for the next few decades.

Ultimately, McVay has a loaded roster led by a quarterback he wanted. His team, struggling but with all its goals still achievable, figures to regain its footing. When it does, it’ll be a foe nobody looks forward to facing in January.

Yet for McVay, it’s all-or-nothing in a season of grand expectations.

If the Rams fall short, the noise around McVay will only grow as the same people who anointed him will be the first to tear him down.