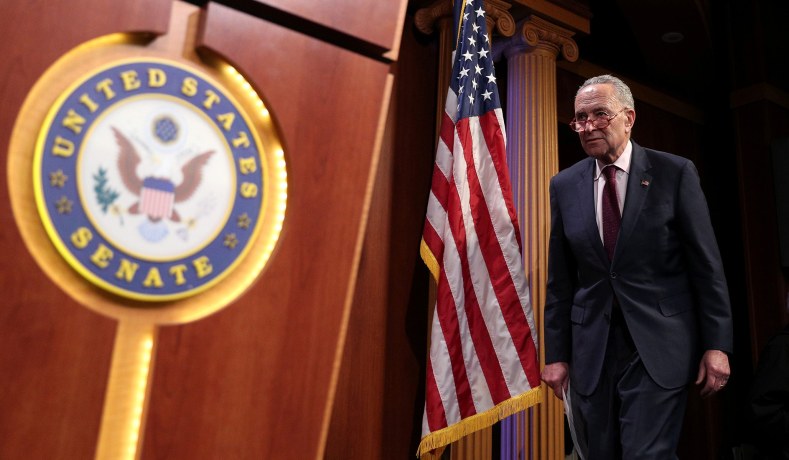 The Senate parliamentarian has rejected Democrats’ third attempt to include immigration in their social-spending package, according to several reports.

Democrats had hoped to use a technical procedure to provide temporary deportation protections and work permits to millions of illegal immigrants before Elizabeth MacDonough, a nonpartisan Senate referee, rejected the proposal on Thursday, according to the Wall Street Journal and CNN.

MacDonough’s guidance likely eliminates any possibility that Democrats can include immigration measures in the bill.

In order to use the reconciliation process, which would allow Democrats to pass President Biden’s “Build Back Better” legislation with just a simple majority, the bill must comply with budget rules that limit what can be included in the legislation. The rules require any policy in the bill to have an impact on federal spending and revenues that isn’t “merely incidental” to its nonbudgetary goals.

The news comes one day after reporting from several outlets indicated that Senate Democrats are likely to miss their self-imposed deadline to pass the social spending bill by the end of the month.

Senator Joe Manchin (D., W.Va.) has held out on supporting the social-spending measure, leaving Democrats short of the 50 votes needed to pass the legislation via budget reconciliation. Sources familiar with planning by Senate Majority Leader Chuck Schumer’s office told NBC News that the vote is likely to happen in the new year in part because Senate Democrats haven’t finished negotiating the bill and because they have not yet completed all the procedural steps necessary to hold a vote.

Two congressional sources told the outlet that a vote could be delayed until March, despite Schumer’s public assurances on Wednesday that Biden and Manchin are “having many discussions” and that Democrats are waiting to see the outcome of those conversations.

CNN’s Manu Raju reports that talks between Manchin and Biden are not going well. The child tax credit has been a huge sticking point, as Manchin wants to cut the measure, according to Raju.

On Thursday, Biden released a statement about his conversations with Manchin, saying the moderate Democrat has “reiterated his support for Build Back Better funding at the level of the framework plan I announced in September.”

“I believe that we will bridge our differences and advance the Build Back Better plan, even in the face of fierce Republican opposition,” Biden said in a statement. “My team and I are having ongoing discussions with Senator Manchin; that work will continue next week.”

“It takes time to finalize these agreements, prepare the legislative changes, and finish all the parliamentary and procedural steps needed to enable a Senate vote,” he added. “We will advance this work together over the days and weeks ahead; Leader Schumer and I are determined to see the bill successfully on the floor as early as possible.”