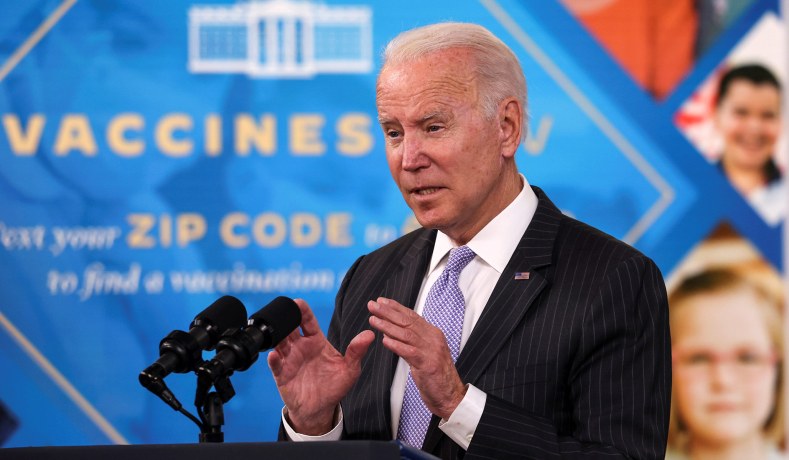 President Joe Biden delivers remarks on the authorization of the coronavirus vaccine for kids ages 5 to 11 at the White House in Washington, D.C., November 3, 2021. (Evelyn Hockstein/Reuters)

Moderate Democratic Senators Jon Tester of Montana and Joe Manchin of West Virginia joined Republicans to pass the measure, which needed just a simple majority to advance under the Congressional Review Act.

Tester told NBC News he is “not crazy about mandates” ahead of the vote and later said Biden’s rules, which will force businesses with 100 or more employees to require workers to be fully vaccinated or be tested at least once a week, are “burdensome regulations.”

While a number of lawmakers touted the importance of getting vaccinated, they said they would not support forcing Americans to receive the shots, calling such requirements “unconstitutional.”

“I want to go off script for a second and emphasize how important the vaccine is, especially booster shots for the omicron variant,” Senator Roger Marshall (R., Kansas) said Wednesday. “But the mandate is going to backfire. The people that have thus far have not gotten, have not received the vaccine are not going to do it until this White House acknowledges natural immunity.”

Senator Mike Braun (R., Indiana) said getting vaccinated “should be a decision between an individual and his or her doctor.”

“It shouldn’t be up to any politician, especially in a mandate coming down from that highest authority, the president,” he said.

However, even if the measure passed the Democratic-controlled House, it is all but certain that President Biden would veto the measure if it were to reach his desk. The resolution did not have a veto-proof majority in the Senate on Wednesday.