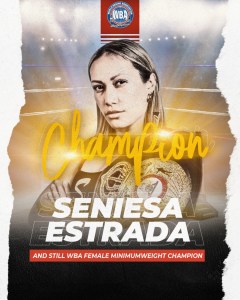 Seniesa Estrada closed her year with golden clasp by making the first defense of her World Boxing Association (WBA) minimumweight title against Maria Micheo with a fourth round knockout at the AT&T Center, in San Antonio, Texas.

The American is one of the best pound for pound and has become a spectacle for boxing fans. She knocked down the Guatemalan twice during the fight and showed great dominance in her actions.

The fighter nicknamed “Superbad” fought with both rights and lefts, used her combinations well and defined the fight with a beautiful left hook that put her opponent on the canvas while the referee ended the fight without taking a count due to the punishment the champion was inflicting.

At 29 years of age, Estrada closes a great 2021. She has been champion of two categories and wants to continue achieving goals. Her record is 22 wins, no losses and 9 knockouts, while Micheo’s is 9 wins, 1 loss and 5 knockouts.