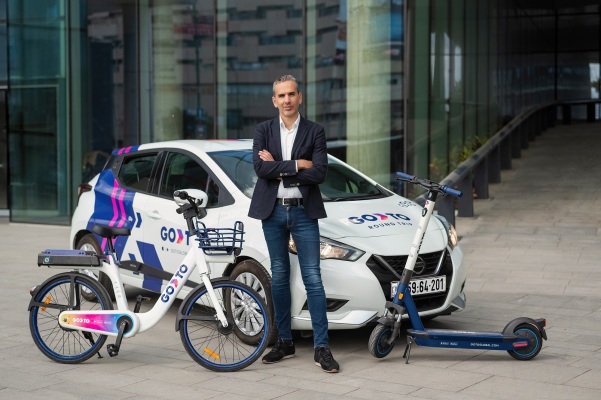 GoTo Global, an Israeli mobility company that offers shared micromobility and car sharing services in Spain, Israel, Malta and Germany, is going public on the Tel Aviv Stock Exchange through a merger with shell company Nera Tech Media. The merger is expected to close in early April, which will initially give GoTo access to the $12 million Nera Tech holds in cash assets, money GoTo will use to expand its footprint in Germany, according to the company’s CEO Gil Laser.

GoTo, which was founded 13 years ago, acquired German shared e-moped operator Emmy last autumn, giving the company an entry into the German market, specifically Hamburg, Berlin and Munich. The plan is to use the funding from the IPO to build out GoTo’s vehicle offerings in Germany with cars and either electric kick scooters or electric bikes, as well as invest in product development.

The startup world has seen a major trend of special purpose acquisition companies forming to merge with private companies and accelerate them on their paths to the public market, but this deal with Nera Tech is a bit different. Merging with a shell company is often referred to as a ‘reverse merger’ and involves an active private company taking control of and merging with a dormant public company, AKA the shell company. Shell companies are usually companies that have previously gone through the IPO process but have sold off their operations, leaving them with just the structure, or ‘shell’, of a company.

Nera Tech itself was formed after the publicly listed company Somoto split into two, with 75% of its shares going to a company called Nostromo, which deals with energy storage and management, as part of a merger with the company. Somoto divided its activities in video and audio advertising and transferred that to Nera Tech Media, which then listed for trading on the TASE.

Nera Tech still owns an AI-powered audio platform startup called Trinity Audio, which Laser says will be sold off, giving GoTo more cash towards its IPO – Laser expects Trinity to sell for around $30 million over the next 18 months. Even with the $18 million that GoTo currently has in cash assets, the $12 million from Nera Tech and the potential $30 million from Trinity, Laser reckons GoTo will need to raise an additional $18 to $20 million for its pre-IPO from VCs, angels or family offices.

The newly formed company will have a market cap value of $163 million, with current GoTo shareholders receiving 74% of the merged company’s stock, and the remaining 26% going to Neratech shareholders.

“We think going public is the best situation right now rather than raise money through VCs, because they’re looking for early stage or huge companies that mainly focus on SaaS and technology,” Laser told TechCrunch. “We are in the middle because we have the technology, but we also have the operations. We took the decision to be a public company because we have a strong product, we are pretty sure that we are advancing the market in two years, and we need to run fast if we want to keep our advantage.”

The decision to go public through a merger with a shell company rather than the traditional IPO is because it was a good deal, so to speak, says Laser, who noted that GoTo has enough money to fulfill all its targets for the next two years and generate its business to be profitable. Merging, he says, is just a shortcut to IPO.

While GoTo is not profitable globally yet, Lasers says the company has achieved profitability and generates positive cash flow in Israel. Usually, shared vehicle companies need to raise a lot more money in order to achieve favorable unit economics that lead to profitability, but GoTo does things a bit differently.

The company, which has a fleet of 5,800 vehicles that have been accessed by over 450,000 subscribers, has memorandums of understanding with companies like Renault, Toyota, Nio and Segway to lease cars and mopeds from them rather than purchasing its own fleet. GoTo still owns the majority of its micromobility vehicles at present, but the goal is to lease those in the future, too. Leasing, rather than purchasing assets which depreciate with time and use, allows the company to enjoy arbitrage. In other words, it will make a profit by taking advantage of the price difference between renting out assets for a period of two years and then renting them back out to users for ten minutes, for example.

GoTo expects this business model to speed up the road to profitability, anticipating that it will earn $35 million in revenue by the end of the year, an increase of 58% over 2021’s reported revenue of $22 million. GoTo previously told TechCrunch it hopes to achieve an annual revenue that exceeds $116 million by the end of next year – a tall order that will require quick scaling.

One of the verticals GoTo wants to continue to expand into is B2B. Currently most of its customers are everyday passengers who have subscribed to GoTo’s ecosystem of available vehicles, but to achieve its goal of doubling the users of its platform, it hopes to bring on businesses. Many companies are giving employees stipends towards travel and commuting every month, which GoTo wants to capitalize on, offering dedicated vehicles for those companies and their employees and even, eventually, longer term rentals for any vehicle.

In the long term, GoTo wants to facilitate all types of transport within the ecosystem. It’s currently doing pilots with ride-sharing companies and prepping its app for such an integration, and wants to find ways to work with public transit agencies to create a holistic ecosystem.