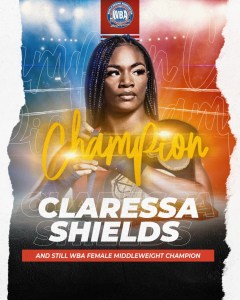 Dominating the fight completely from start to finish, Claressa Shields retained the World Boxing Association title at 160 pounds after ten rounds against Ema Kozin in the UK. All the judges scored 100-90 in favor of the Champion.

The GWOAT or T-Rex lived up to her words of warning to the Slovenian, which she had launched days before the fight: “don’t close your eyes”.  Even while showing respect for Kozin, Shields demonstrated her self-confidence.

The fight began with an analysis by the two boxers in search of deciphering each other’s plans. On the second round, the ability of the North American star prevailed with her patience to find the spaces to attack with the power of her fists.

The fight was uneventful. The southpaw boxer ran out of resources against an intelligent Shields, who at times sped up the offensive by putting on the ropes and even destabilizing Ema Kozin, who couldn’t shine.

Thus, the 26-year-old double Olympic medalist, WBA, WBC, and IBF Middleweight Champion now has an unblemished record of 12 fights, with 2 KOs. Kozin, on the other hand, has lost her undefeated record and now has 21 wins with 11 KOs, 1 loss, and 1 draw.

Shields wants to unify the belts in the division. For this, she must face Savanna Marshall, who owns the WBO title, and with whom she had an exchange of words and shouts when leaving the ring. Both long to prove to the world who is the best at 160 pounds and everything indicates that they will soon be able to do so.