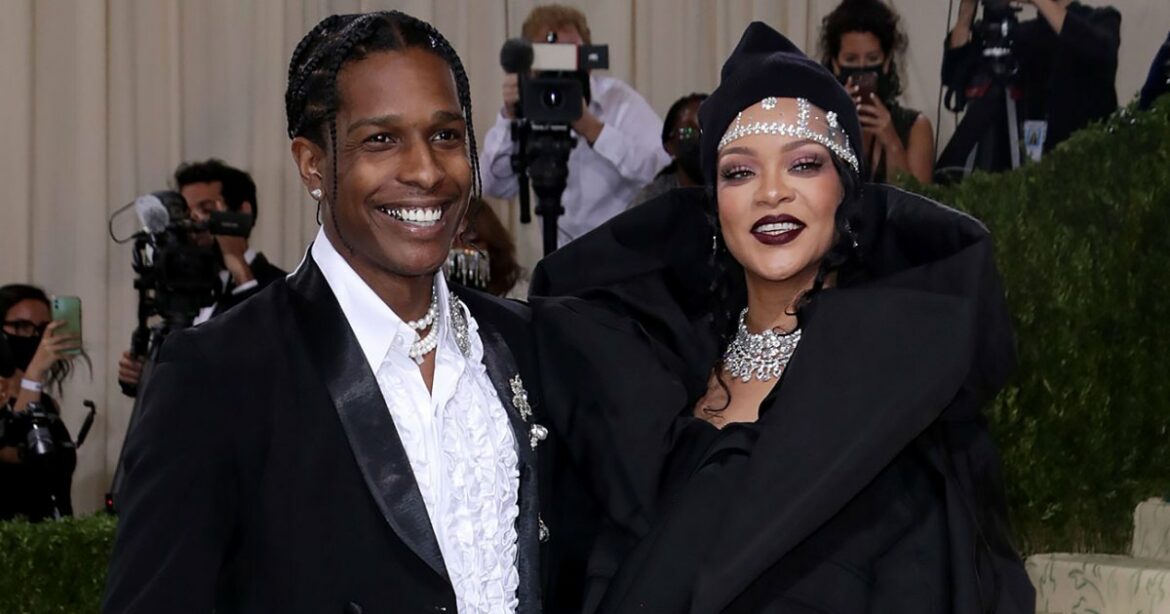 Date night! Rihanna stepped out — and turned heads — with boyfriend A$AP Rocky at the 2021 Met Gala on Monday, September 13, after skipping the annual fashion event in 2019.

The 33-year-old “Desperado” songstress dazzled in an all-black Balenciaga Couture ensemble for the “In America: A Lexicon of Fashion” themed event. The top of the gown looked like an oversized coat, while the bottom half cinched in for a mermaid-style skirt. Rihanna topped off her look with a black beanie, Bvlgaria jewels and diamond headpiece.

The 32-year-old rapper also donned an oversized coat — his included a colorful, patchwork design — when walking the carpet late with his love. Rocky later dropped his outerwear to reveal a black suit with jeweled embellishment on the collar.

The evening marked the couple’s first Met Gala together as the star-studded evening was canceled in 2020 amid the coronavirus pandemic. One year prior, the “Diamonds” singer was noticeably absent from the gala after cohosting the 2018 event alongside Anna Wintour, Amal Clooney and Donatella Versace. 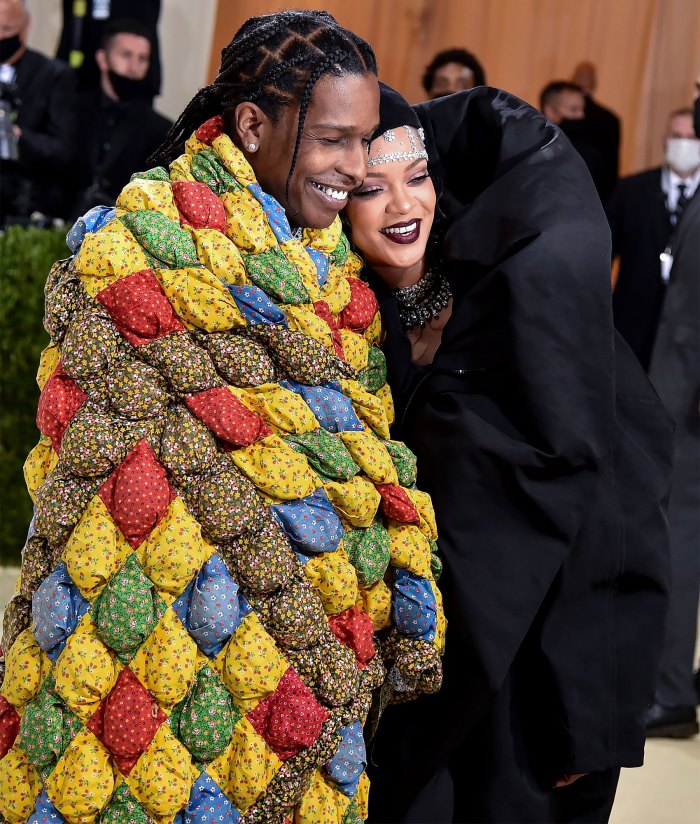 Rihanna updated her fans on her whereabouts during the Met Gala in May 2019 by sharing a photo of her Fenty Beauty lipsticks via her Instagram Story. After a fan jokingly called her out on Twitter for “playing with that f–kin makeup” instead of attending the New York City affair, the musician shared a screenshot of the tweet alongside a weary-looking emoji and another shrugging emoji.

Although she wasn’t present to see any celebrities’ looks firsthand, the “Umbrella” singer shared her favorite outfit from the night, dubbing Wintour, 71, as the “best dressed” for her bedazzled Chanel gown and pink feathered cape.

One year prior, the Ocean’s Eight star was the belle of the ball in a silver, bedazzled Maison Margiela Artisanal ensemble and pope-inspired hat. Rihanna’s jaw-dropping look fit perfectly with 2018’s “Heavenly Bodies: Fashion and the Catholic Imagination” theme.

The Barbados native attended her first Met Gala in 2007. She has since turned the event into her personal runway by wearing statement-making outfits year after year.

Some of Rihanna’s biggest fashion hits include 2014’s sexy Stella McCartney white skirt and crop top combo for the “Charles James: Beyond Fashion” theme and 2015’s yellow Guo Pei cape and matching headpiece in honor of the “China Through the Looking Glass” event.

Ahead of her fashionable night out on Monday, Rihanna spent time with fellow Caribbean queen Nicki Minaj and the rapper’s 11-month-old son on Labor Day. The fashion designer cozied up to her boyfriend while getting to know the 38-year-old “Starship” singer’s little one.

The “Chun-Li” rapper, who shares her son with husband Kenneth Petty, shared photos from the night via Instagram. “#RokNRiha #QueenRih #CaribbeanGirlsRunit,” Minaj captioned the group snap on September 6. “Love her downnnnnnn #NewYorkShit #YKTFV.”

The hangout came nearly two years after Rihanna was first romantically linked to Rocky in December 2019. The pair’s relationship has since become pretty serious, with a source exclusively telling Us Weekly in August that they are “madly in love” with each other.

“It’s true there’s a lot of buzz in their circle about an engagement being in the works. Going by the hints Rocky’s been dropping, [it] may well happen soon,” the insider added. “But there’s no pressure and what matters most to both of them is to keep building on this truly beautiful thing they’ve got going.”