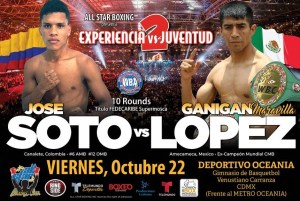 Colombian Jose Soto and Mexican Ganigan Lopez will have a youth vs. experience fight on Friday at the Blackberry Auditorium in Mexico City, in which the World Boxing Association (WBA) Super Flyweight Fedecentro title will be at stake.

Soto is one of the great prospects of Colombian boxing and will be in the main fight of the event organized by All Star Boxing in the Mexican capital. This fight will be different for him and means a challenge for being his first presentation outside his native country, besides fighting against a former world champion and, of course, having the opportunity to win the regional title.

Lopez is an experienced fighter who has already been a world champion and wants to make his experience count on Friday night. He has fought some great opponents in his career and being at home will fill him with confidence and motivation to try and stop an opponent like Soto.

On Thursday will be the weigh-in ceremony where they should stop the scale at 115 pounds and on Friday both will be ready to fight.  Soto, is undefeated in 15 fights, of which he has won 6 by way of KO, while the Mexican has 36 wins, 11 losses and 19 knockouts.