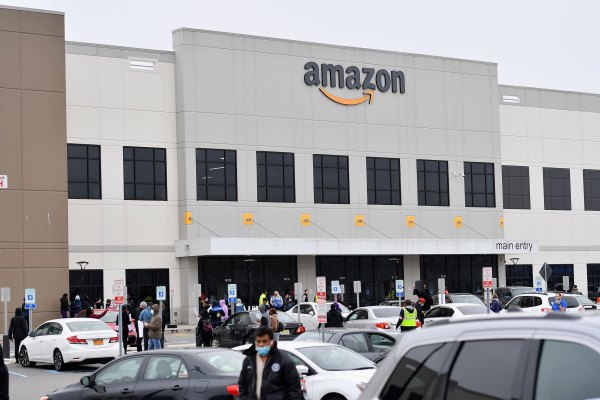 Late next month, workers at Amazon’s Staten Island fulfillment center will hold a long-awaited union vote, if all goes according to plan. The in-person election is tentatively set for March 25 through 30, coinciding with the culmination of a mail-in re-vote being held at the company’s Bessemer, Alabama warehouse.

Christian Smalls — a former employee of the JFK8 warehouse in the New York borough and current president of the Amazon Labor Union organization — acknowledged that Amazon had reached an agree with the National Labor Relations Board for the election. The company confirmed the process with employees via text message, while encouraging them to vote “no” more than month in advance.

It’s the beginning for what is certain to be an aggressive anti-unionizing push for the retail giant. Amazon employed aggressive tactics in the lead up to last April’s election. Ultimately, factors like an on-site mail box and “vote no” signage were enough to affirm the Retail, Wholesale and Department Store Union’s objections and force the aforementioned follow-up election. The Staten Island election is the culmination of JKF8 employees’ own long-time push.

Things hit a fever pitch at the massive warehouse in 2020, with employees protesting conditions as essential workers during the cresting of the first wave of the COVID-19 pandemic in New York City. An assistant manager at the time, Smalls was fired the day he led the walkout. The company accused him of violating COVID safety protocols. The company reportedly began a campaign against Smalls soon after.

In October, the Amazon Labor Union had previously pushed for an election that would include all of the company’s Staten Island warehouses, ultimately withdrawing for lack of signatures. Instead, this latest election is focused specifically on JFK8, the borough’s largest fulfillment center. In December, workers at Chicago centers staged their own walkout as part of a groundswell of worker pushback against warehouse conditions.

The symbolism of effectively holding two major votes together in different parts of the country no doubt has not escaped Amazon, which has long resisted union organizing, pushing back against years of negative coverage and insisting that workers in its centers are treated fairly. The weeks leading up to both will no doubt continue with a fair amount of fireworks — particularly with the New York election occurring in person.

We’ve reached out to Amazon, the ALU and the NLRB for additional comment.