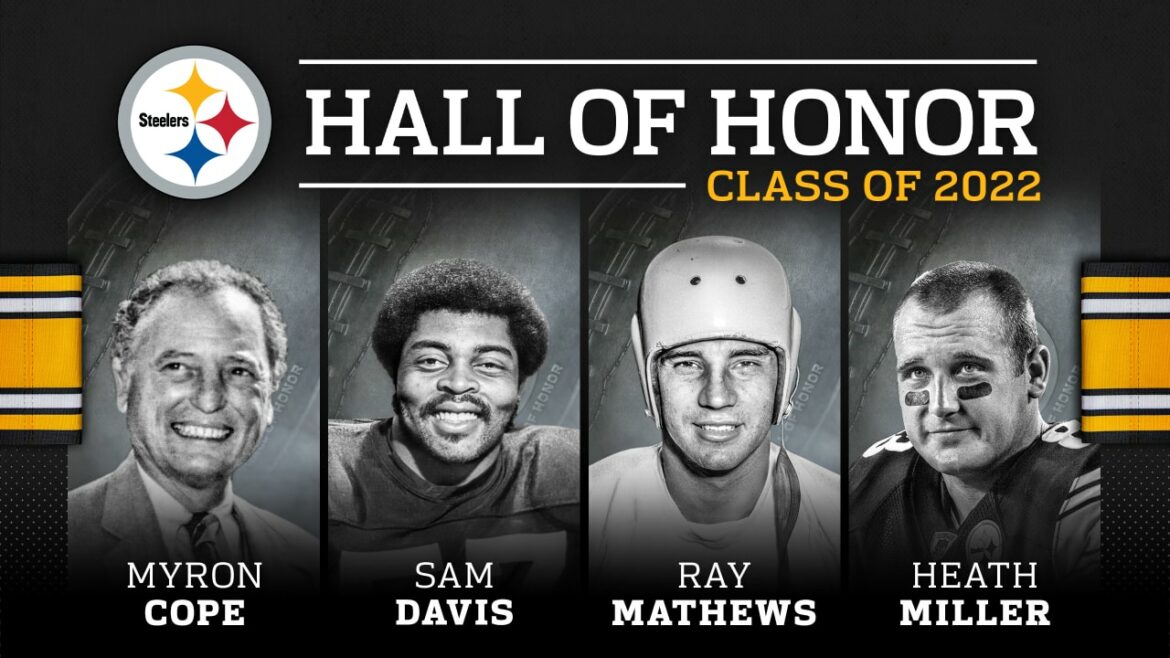 Since its inception, the Steelers Hall of Honor has recognized the best of the best who have contributed to the organization, whether it be on the field, or off the field.

The Hall of Honor Class of 2022 spans the decades and appeals to generations of Steelers fans, and includes legends Myron Cope, Sam Davis, Ray Mathews and Heath Miller.

“Great day at Saint Vincent,” said Steelers President Art Rooney II. “Great to be able to introduce the 2022 Hall of Honor class. A group of people over many decades who made fantastic contributions to the team.

“Myron is the first one we are putting in the Hall that was never employed by the Steelers. A great broadcasting career and certainly one of a kind. Sam was an undrafted player. He came on a little bit slow and worked his way into being a foundation of that line. I remember people talking about Ray. I know my dad and grandfather used to talk about him and thought he was a great player. Heath was a model citizen. A team player, unselfish. Did whatever needed to be done to have success. His work ethic was fantastic.

“We started this (Hall of Honor) with the idea there would be players and others that aren’t going to be recognized in Canton but deserve this kind of recognition. I think this group really fits that description in terms of people that made great contributions. Wanted to make sure that people like this are recognized.”

Miller was on hand for the announcement at Saint Vincent College and was humbled by the honor.

“I was shocked when I got the call,” said Miller. “I was shocked and taken aback. It wasn’t expected. It wasn’t even on my mind. My phone rang and I saw the Pittsburgh Steelers on the caller ID and I was like, ‘Oh, that’s weird.’ It was Mr. (Art) Rooney and he told me.

“It’s a huge honor. I couldn’t be more grateful and honored to be a part of this Hall of Honor class.”

Miller, who is the only living member of this year’s class, knows what it means to be a part of such a legendary group.

“I am still wrapping my mind around it a little bit,” said Miller. “The Steelers organization starts with the Rooney family, but it was built through so many great, iconic players throughout the history of the NFL. As I was playing, Coach (Mike) Tomlin talked about the standard all the time. I just wanted to make people who wore the black and gold before us proud and live up to their expectations. To even be mentioned with them is special.

“The culture here from the top down is based off of hard work. For me it was the perfect match. I couldn’t pick a better team to play for. I’m very proud to have been a part of it.”

The team introduced the Hall of Honor in 2017, an idea that came from Art Rooney II, along with late Chairman Dan Rooney. Former coaches and contributors had to make significant contributions to the team and community.

The Steelers will welcome the 2022 Hall of Honor Class on the weekend the team takes on the New Orleans Saints. The Steelers will enshrine the new class, which includes an on-field presentation during the game on Sunday, Nov. 13.

The Steelers Hall of Honor Museum will be located near Gate B above the team’s Pro Shop.

Oh, and also a little something called the Terrible Towel.

He brought a unique approach to the booth up until his final season in 2004, an approach that endeared him to listeners and made him a Pittsburgh legend.

It all began in 1975 when Cope encouraged Steelers fans to bring a yellow dish towel to the team’s playoff game against the Baltimore Colts and wave them to help rally the team. The fans responded, the Steelers won, and the legend of the Terrible Towel began.

Cope’s professional career went well beyond the Steelers broadcast booth. He was a writer, something he took great pride in, and wrote for Sports Illustrated as well as numerous other publications. Cope hosted a nightly talk show on WTAE-AM, as well as serving as a sports reporter for WTAE-TV.

Cope was a voice Pittsburgh could trust, someone who wasn’t trying to make headlines, just trying to bring you the facts.
“You have to keep perspective,” said Cope the day he retired. “To me, I’m most proud of my credibility.

He was a long-shot, someone known as a ‘sleeper’ when he came into the NFL as an undrafted rookie back in 1967, one of the many gems Hall of Fame personnel guru Bill Nunn discovered.

But one thing you quickly found out about Sam Davis was when it came to his playing skills, he was no sleeper.

Davis came to the Steelers from Allen University, a small school in Columbia, South Carolina whose enrollment at the time was under 1,000 students. Davis spent his summers in South Carolina, one of the few players there training at the school before the start of each new season to be at his best, because he had a dream to take his game to the next level.

That dream came true when the Steelers signed him, but it became even more of a reality when he earned the starting left guard spot his third season and went on to start on four Super Bowl championship teams in the 1970s.

“He had a toughness that served him really well,” said former tight end/tackle Larry Brown, also a member of the Hall of Honor. “He played with great technique and was tenacious. They would be in battle for the whole game, and Sam was usually going to win that.”

Davis, who died in 2019 at 75 years old, was also an offensive captain for much of his career, known to his teammates as a quiet man who led by example. And he wasn’t afraid to share his knowledge, helping a young Craig Wolfley who eventually replaced Davis.

“Sam was just a great teammate,” said Wolfley. “He showed me what it meant to be a Steeler, helping a young guy like me learn the game.”

He played before the Steelers reached their glory years, but Ray Mathews brought his share of glory to the Steelers with his play during nine seasons in the black and gold.

He finished his Steelers career with 230 receptions for 3,919 yards, which ranks 11th in team history.

One of the best games of his career came against the Cleveland Browns in 1954, the first time the Steelers defeated their rival. Mathews scored four touchdowns, including three touchdown receptions, in the 55-27 victory.

Mathews, who attended McKeesport High School in the Pittsburgh area, was one of the Steelers early hometown heroes. And he did his hometown proud as a two-time Pro Bowl selection (1952 and 1955).

When you think of Steelers tight ends, the first name that comes to mind is no doubt, Heath Miller.

Or should I say, ‘Heeeeath.’

Miller was the Steelers No. 1 pick in the 2005 NFL Draft. Miller, who played 11 seasons, started 167 of 168 games played during the regular season, and he started all 15 postseason contests that he played in. Miller’s 168 regular-season games played are the most by a tight end in Steelers’ history.

As great a player that he was, he never looked at himself as a superstar, never sought out the spotlight, never patted himself on the back.

When he retired in 2015, he didn’t want any fanfare, instead just releasing a statement.

“Today, I informed the Steelers of my plans to retire,” Miller’s statement read. It was truly an honor for me to take the field with them.

“Lastly, I owe the biggest thank you to my wife, Katie, and our four children for their unwavering support.”
And with that, the best tight end in Steelers’ history quietly stepped away from the game.

But what he did for the team, will remain forever.

“It’s been an honor and a pleasure to coach him, to watch him grow and evolve and perform,” said an emotion Coach Mike Tomlin after Miller’s retirement. “To watch him grow in every way. He is not low maintenance, he has been no maintenance. He has always put the Pittsburgh Steelers first in every aspect of his professional life. I don’t know that I can describe that. I don’t know if there has been a guy that I have been around that is like him from an unselfish standpoint. Largely and in every instance, we are all human, we all fall short. I don’t know if I have ever seen a regrettable moment in him. That just speaks to who he is.”

Miller retired as the all-time leader in receptions (592), receiving yards (6,569) and receiving touchdowns (45) by a tight end. He was a member of the Steelers’ Super Bowl XL and XLIII Championship teams, a two-time Pro Bowl selection, and team MVP in 2012.

“The day-to-day example he set for others. The legacy that is his career will touch us and specifically the tight end position here in Pittsburgh for a long, long time. I imagine there will be guys that reflect and represent his values for years to come. Impactful guys like him always do.”