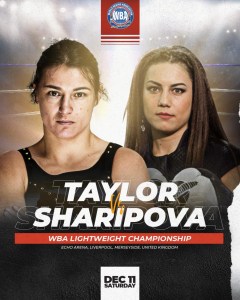 The closing of the year 2021 would not have been possible without the return of the undisputed lightweight queen, Katie Taylor, who will close her calendar with a new defense, this time against Kazakhstan’s Firuza Sharipova at the Echó Arena, in Liverpool, England.

The Irishwoman will put her World Boxing Association (WBA) championship on the line along with the IBF, WBC and WBO belts against a young and highly motivated opponent.

Taylor has fought two outstanding and demanding fights this year. First she dominated Natasha Jonas in May in a best of the year candidate fight, and then she won a unanimous decision over Jennifer Han in September.

The 35-year-old champion had a great amateur career and all of that success is carrying over to the pro ranks. However, she has had to work hard because of her opponents’ motivated approach to her fights.

Sharipova’s case does not seem to be the exception and it is that each of Taylor’s opponents has an extra boost to get all the belts and get among the elite if she gets the win. The Kazakhstan is 27 years old and her first big fight, so she becomes very dangerous.

This Friday they will step on the scales and Saturday will be the bout. Taylor is undefeated in 19 fights, with 6 knockouts and Sharipova has 14 successes, 1 failure and 8 knockouts.