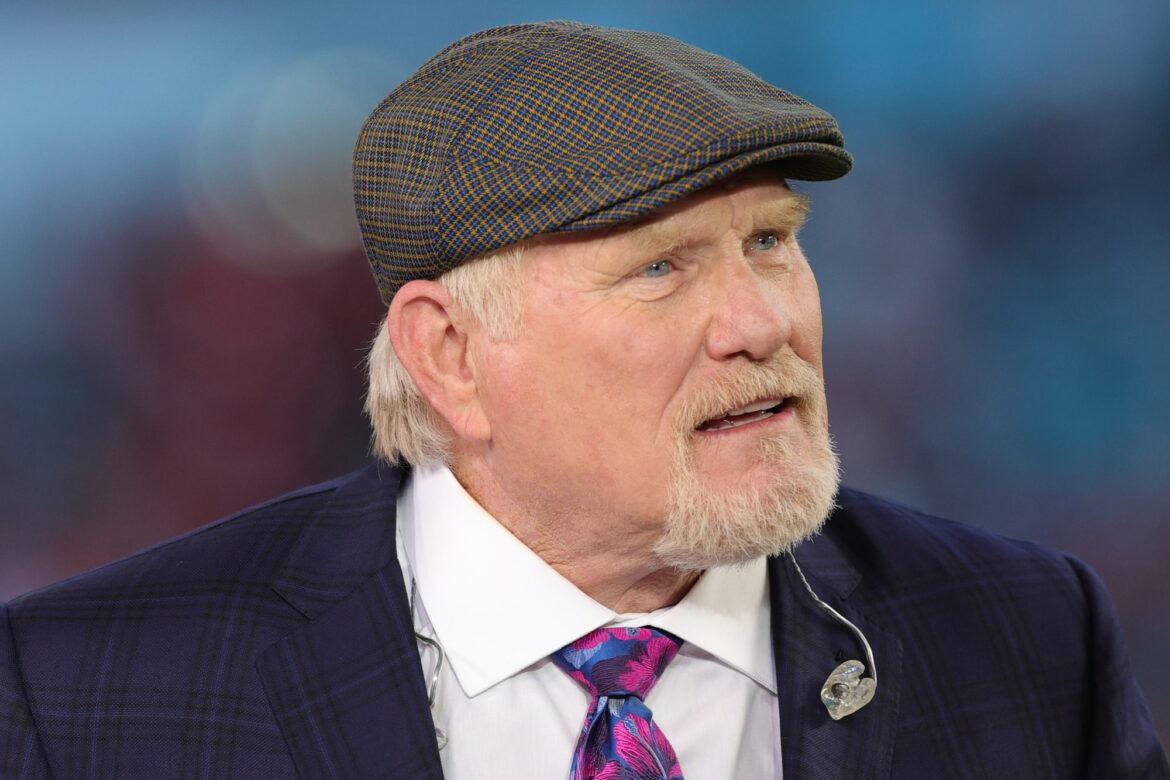 Before the “Thursday Night Football” game between the Tampa Bay Buccaneers and the Philadelphia Eagles, longtime NFL commentator Terry Bradshaw was chatting with lead sideline reporter Erin Andrews about a Devin White interview she recently did. White, a Buccaneers linebacker famous for his love of horses, was interviewed in his horse stable. Andrews and White sat on bales of hay, while Andrews embraced the country theme with a tan pair of cowboy boots.

Bradshaw complimented Andrews’ interview outfit, and although he likely was well-intended with his compliment, his tone and gestures came across as inappropriate to say to a female colleague.

“You got your cowboy boots on, and your shirt… you’re looking good. That was nice, I enjoyed that interview,” Brashaw said as he gestured over his chest.

The interaction was also described as “cringey” by another Twitter user.

Annie Apple, the mother of Cincinnati Bengals cornerback Eli Apple, joked about how Bradshaw’s emails must look in light of the Jon Gruden email scandal.

University of Massachusetts sports journalism director Steve Fox pleaded that it’s time to get Bradshaw off the air for his “good ‘ole boy routine.”

Here’s my semi-regular plea to Get Terry Bradshaw Off The Air. His good ‘ole boy routine is over.

This isn’t the first time that a prominent NFL commentator made a comment that alienated female NFL fans.

In December 2020, Cris Collinsworth made a comment about female Pittsburgh Steelers fans that he met that impressed him with their knowledge of the game.

“Everybody’s a fan. In particular, the ladies that I met,” Collinsworth said. “They have really specific questions about the game, and I’m like, ‘Wow.’ You’re jus blown away by how strong the fans are here in this town.”

Collinsworth soon apologized for the implication his message conveyed, which was that it was surprising to meet women who loved football and knew the sport deeply.

What Collinsworth and Bradshaw’s comments highlight is that despite recent advances, sports journalism is still fraught for female journalists for a variety of reasons. Female journalists who cover football are sometimes seen as less knowledgeable about the game due to their gender, which often causes women to be pigeonholed into limited roles in media.

Female journalists are also sexualized frequently by sports fans, something Erin Andrews experienced to a dangerous degree when someone stalked her to her Nashville hotel room and secretly filmed her in 2008.

As innocuous as Bradshaw’s comments may seem to some, for those who are aware of the uncomfortable compliments women frequently hear about their appearance, one thing is clear: Bradshaw shouldn’t have leered at a female colleague on national television.