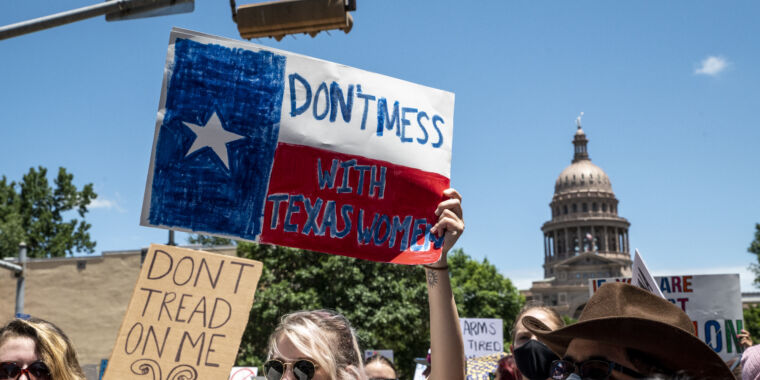 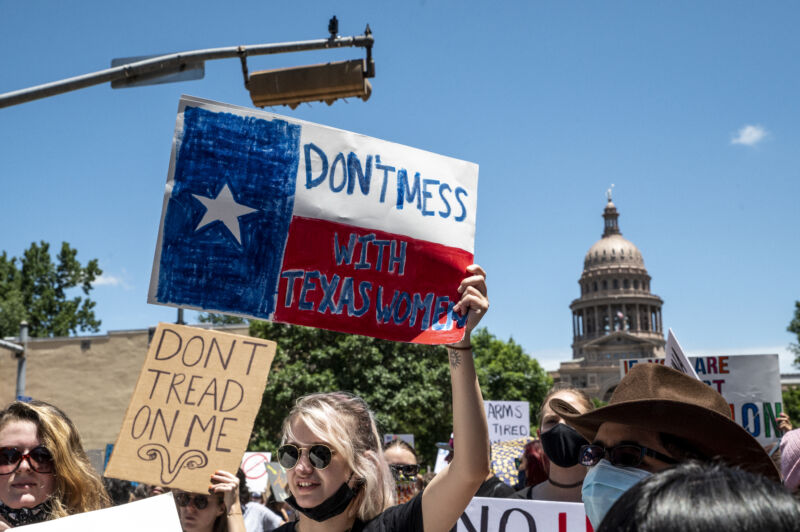 Enlarge / Protesters hold up signs as they march down Congress Ave at a protest outside the Texas state capitol on May 29, 2021 in Austin, Texas. Thousands of protesters came out in response to a new bill outlawing abortions after six weeks was signed into law by Texas Governor Greg Abbot.

Salesforce CEO Marc Benioff confirmed late on Friday that his company would pay for employees and their families to relocate out of Texas if they are concerned about their ability to seek reproductive health care. The move comes after the state’s anti-abortion law went into effect earlier this month and the US Supreme Court refused to block the law.

“Ohana if you want to move we’ll help you exit TX. Your choice,” Benioff said in a tweet, using the Hawaiian word for “family.” (Benioff and Salesforce have a long obsession with things Hawaiian.)

Texas’ new law, known as Senate Bill 8, bans abortions as early as six weeks. That’s well before many women know they’re pregnant. Most women won’t be able to get an accurate result from an at-home pregnancy test until three to four weeks after the day of their last period, and those who don’t take a test won’t suspect anything until they miss a period four weeks in. Six weeks is so early that doctors don’t call it a fetus, they still call it an embryo. Six weeks is far too early for anyone to know whether the pregnancy won’t spontaneously abort itself. So effectively, the law gives women at most two weeks to decide whether to seek an abortion. It does not make exceptions for rape or incest, but does for medical emergencies.

The law is unusual in that it doesn’t let state officials enforce the ban, but rather says individuals can file lawsuits against anyone who “aids or abets” an abortion after six weeks, guaranteeing at least $10,000 in damages for each abortion. Basically, it allows people to become bounty hunters, chasing after women seeking medical care.

The US Supreme Court decided 5-4 on procedural grounds not to hear an emergency request to block the law. In a dissent, Chief Justice John Roberts said the law was “not only unusual, but unprecedented.” He continued: “The desired consequence appears to be to insulate the State from responsibility for implementing and enforcing the regulatory regime.”

“We stand with all our women”

The law and the Supreme Court’s decision have prompted several tech companies to announce policies aimed squarely at the new law.

Salesforce announced its policy in a company-wide Slack message, which CNBC obtained. “These are incredibly personal issues that directly impact many of us—especially women,” the message said. “We recognize and respect that we all have deeply held and different perspectives. As a company, we stand with all of our women at Salesforce and everywhere. With that being said, if you have concerns about access to reproductive healthcare in your state, Salesforce will help relocate you and members of your immediate family.”

Though the company did not take an official stance on the law itself in the message, CNBC said, it’s pretty easy to read between the lines to see where the company has landed.

Salesforce isn’t alone. Several domain registrars and web hosts have taken stances. The anti-abortion group Texas Right to Life has been trying in vain to find a domain registrar and web host for a “whistleblower” site it set up after the new law took effect.

First it was denied by GoDaddy for collecting without written consent “non-public or personally identifiable information.” Then it was told by Epik, the same company that provides domain services for Gab and Parler, to go find another registrar. The company hasn’t booted the group yet—prolifewhistleblower.com redirects to the group’s homepage—but Epik did say that if the site ever collects user submissions, they’ll pull it. So far, Texas Right to Life hasn’t been able to find a registrar or host for the site.

Earlier in the month, Lyft and Uber announced that they would cover legal fees for any drivers who were sued under the new law. Lyft CEO Logan Green said the Texas law “threatens to punish drivers for getting people where they need to go—especially women exercising their right to choose.” His company started a fund that would “cover 100% of legal fees for drivers sued under SB8 while driving on our platform.”

Uber CEO Dara Khosrowshahi chimed in an hour and a half later, saying that “drivers shouldn’t be put at risk for getting people where they want to go,” adding that his company “is in too and will cover legal fees in the same way.”

Salesforce’s move may hit the bottom line harder, though. Benioff has said he expects that a significant fraction of his company’s employees will work remotely, which would free workers to live anywhere in the country, including Texas. Those who moved there during the pandemic would likely qualify for relocation expenses under the new policy. Plus, Salesforce has a large office in Dallas, where it reportedly leases 100,000 square feet of office space for around 1,000 workers, all of whom would also be eligible to move.

This isn’t the first time Salesforce has made a business decision based on what it views as discriminatory state laws. In 2015, it said it would cancel events in Indiana and reduce its investment in the state following the passage of the Religious Freedom Restoration Act. Later, however, it announced an expansion in Indianapolis after the state law was revised to make an exception for a city ordinance banning discrimination on the basis of sexual orientation or gender identity.