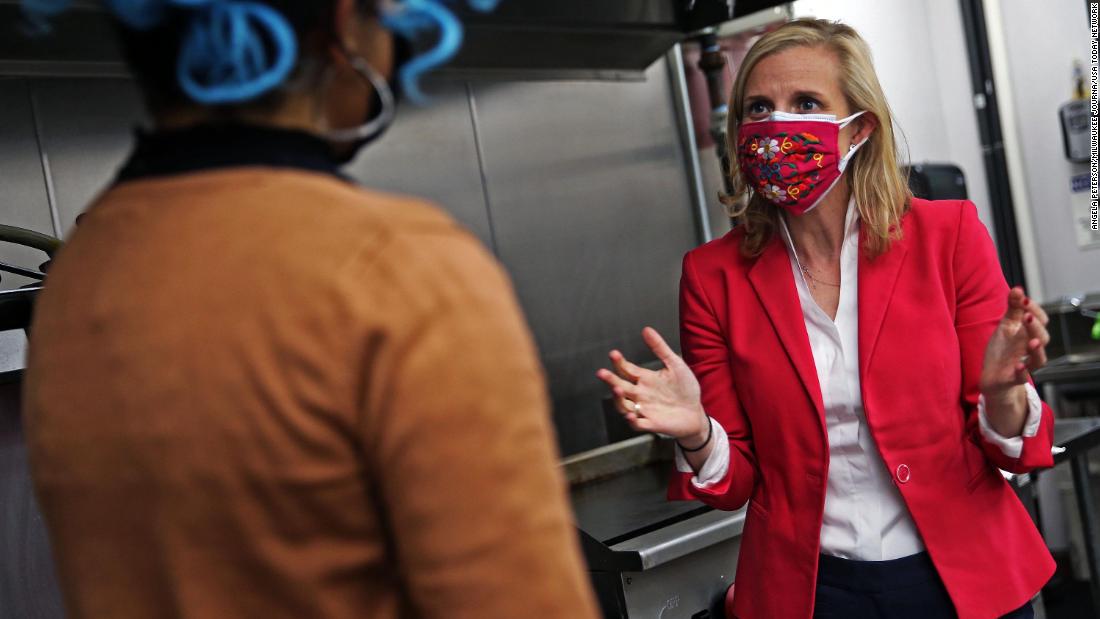 “When you look at why we can’t do it, it’s because of the filibuster,” Godlewski said in an interview.

Godlewski, who also serves as state treasurer, doesn’t lead with filibuster reform on the campaign trail because, she said, Wisconsinites “don’t care about the sausage making.” But she knows how vital the issue has become in her party.

“I think it is hard to be a Democrat running and not be for getting rid of the filibuster,” she said.

Across the country, Democratic Senate candidates like Godlewski have doubled down on their support for scrapping or reforming the filibuster to advance legislation that is overwhelmingly popular with party voters. A recent explosion in campaign messaging tied to the issue shows it has become a potent tool for candidates courting both big and small donors.

“Democrats can only step up to protect our democracy if we END the filibuster,” read a campaign email last fall from Florida Rep. Val Demings, who has raised $20.7 million so far this cycle in her bid to unseat GOP Sen. Marco Rubio. Even more establishment-friendly groups, including a number with deep pockets and close ties to some of the Democratic Party’s biggest donors, have taken hard positions on the filibuster. EMILY’s List, which backs female Democratic candidates who support abortion rights, announced it would not back Arizona Sen. Kyrsten Sinema, who opposes changing filibuster rules, so long as she maintains her stance. NARAL, another abortion rights group, has said it will not endorse any candidate who opposes a rules change. This sea change in Democratic politics happened slowly, and then seemingly all at once. In 2020, former President Barack Obama damned the filibuster as a “Jim Crow relic” at a memorial for the late Georgia congressman and civil right icon John Lewis. And over the past year, as President Joe Biden‘s agenda hit the skids in Congress, frustrated grassroots activists and, crucially, party donors began to apply new pressure to candidates and elected leaders to pursue more aggressive tactics. Last month, Senate Majority Leader Chuck Schumer bulled ahead, with Biden’s support, on a quixotic effort to change chamber rules and create a filibuster carve-out for the consideration of voting rights legislation. He secured the support of 48 of the 50 members of his caucus, with Sinema and West Virginia’s Joe Manchin the lone, decisive holdouts. Predictably, no Republicans backed the move, killing the effort for now.

“They’re over it. They’re frustrated”

Frustrations over these Senate maneuvers are playing out for many Democrats on the campaign trail.

In Pennsylvania, Lt. Gov. John Fetterman has been a vocal advocate for scotching the filibuster as he bids for the state’s open Senate seat.

The people of the United States elected Chuck Schumer to be majority leader. But by default, you have [Senate GOP leader] Mitch McConnell as the shadow leader because they’re stopping our agenda wholesale because of the filibuster. People understand that,” Fetterman told CNN. “They may not be able to give you an in-depth history across the decades of it, but they understand that it is the one thing that is stopping us getting things done.”

Even Rep. Conor Lamb, a Pennsylvania Democrat who has compiled a moderate voting record in Congress and is also running for Senate, has joined the anti-filibuster chorus.

“Republicans are abusing it to block voting rights and endanger our democracy … to block health care and child care and union protections,” he said in a video earlier this year.

Ohio Democratic Senate hopeful Morgan Harper said voters there have become savvy in their understanding of Senate procedure. The constant national news coverage of Democrats’ slim majority in the upper chamber and how dependent it is on Manchin and Sinema has heightened awareness of the process, she said.

“There’s a high level of voter frustration around this,” Harper said in an interview. “They’re over it. They’re frustrated. They showed up. They voted for change, for results.”

A CBS News/YouGov poll conducted last month found that 35% of US adults were in favor of ending the filibuster, 34% were opposed and 31% said they had not heard enough to form an opinion. The partisan differences were more stark: 58% of Democrats supported ditching the rule, while 65% of Republicans favored keeping it in place. Data for Progress, a progressive Democratic think tank and polling firm, has tracked the issue as it relates to voting rights for years. Its poll from July 2020 found 54% of all voters supported ending the filibuster to pass “a new voting rights bill,” with only 27% opposed. Majorities of Democrats and Republicans were in favor, with 65% and 51%, respectively, the survey found. But fast-forward to 18 months later, and a yawning partisan gap has opened up. According to January’s Data for Progress poll, 81% of likely Democratic voters supported “changing this Senate procedure” to pass the voting rights legislation that was blocked in the chamber last month. Only 26% of likely GOP voters felt the same. As Republican candidates race to embrace the so-called Big Lie that Donald Trump won the 2020 election, Democratic hopefuls seem to be checking a different box altogether, with most major candidates, from progressives in blue states to moderates in red or purple states, declaring their disdain for the Senate filibuster.

That dynamic might well flip the next time Republicans achieve a governing trifecta, but for this campaign season at least, the incentive for Democrats trying to juice up a beaten-down base is clear.

“What we’re actually talking about is clearing the path for legislation that’s going to support the needs of working people throughout our country,” Harper said. “And the filibuster is a roadblock to doing that.”

The fight for filibuster reform among Democrats can be nuanced. While 48 senators voted for the voting rights carve-out last month, some like Nevada’s Catherine Cortez Masto, Arizona’s Mark Kelly and New Hampshire’s Maggie Hassan, all vulnerable senators up for reelection this year, aren’t in favor of scrapping the filibuster entirely.

The Democratic Senatorial Campaign Committee does not have an official position on the issue, and Manchin and Sinema, for all the furor over their votes against changing Senate rules, are not on the ballot again until 2024.

DSCC Chair Gary Peters, a second-term senator from Michigan, downplayed disputes within his party’s narrow majority, saying recently: “I just continually tell our friends we need to stay focused on the next few months. There’s just so much at stake going forward, with the Biden administration and things we care deeply about.”

McConnell did hold firm in refusing to eliminate the legislative filibuster in 2017 and 2018 when Republicans had full control of Washington, despite intense pressure from Trump to do so.

Still, Democrats like Fetterman say that if — and when — the shoe is on the other foot and a potential GOP majority needs to remove the barrier to achieve a legislative goal, Republicans will change their tune.

The filibuster “is gonna be the first thing to go if they’re in a position to run the table,” Fetterman said. “We will have allowed them to get there by not passing these kind of reforms that are so necessary right now.”

Progressive activist group Indivisible, which has emerged as a Democratic grassroots powerhouse over the past five years, began a project to educate its members and the public about the Senate filibuster and its consequences back in 2018, when Democrats stormed back into control of the House.

Ezra Levin, a co-founder of Indivisible, told CNN his group began to see a groundswell forming that year. Concerns over the future of democracy were stoked by Trump’s presidency, he said, and soon became the top issue for local chapters.

“It was above climate and above health care, above immigration,” Levin said. “They cared about all those things, but their top issue was democracy itself.”

Indivisible leaders — with their intimate knowledge of congressional wonkery and the institution’s inner workings — set about connecting that desire to the practical matter of the filibuster and the power it imbues to the minority party to block popular legislation.

On the presidential primary trail in 2019, leading candidates were still only, at most, lukewarm on publicly endorsing an end to the filibuster. But with time, pressure and twin victories in Georgia at the beginning of 2021 delivering Democrats a surprise Senate majority, the balance has shifted.

“I would be shocked if a Democrat wins a primary in North Carolina or Pennsylvania or Wisconsin who does not support ending the filibuster,” Levin said. “Not just kind of in a squishy way, but in an affirmative, ‘I’m going to fundraise off of this’ kind of way.”

That dramatic evolution has come out of necessity, a host of leading advocates insisted in a series of conversations with CNN.

“The filibuster is an impediment to basically every priority Democrats have campaigned on for the last decade. We’re seeing it with voting rights. We will likely see it with reproductive health protections,” said Tré Easton, deputy director of the progressive communications firm Battle Born Collective.

When asked if the politics of the filibuster could hurt vulnerable moderate Democrats in a general election, Easton argued that the filibuster currently advantages Republicans by letting them block legislation popular with most voters without facing any consequences. He suggested Democrats stand firm on the issue, even if challenged.

“If you are able to articulate why you believe a thing, it’s not a liability,” Easton said. “You’re actually just saying you understand you want democracy to function.”

That is the underlying message from Democratic candidates — and not just those running for Senate. New York Democrat Melanie D’Arrigo is making a second run for the Long Island-based 3rd Congressional District, which Democratic Rep. Tom Suozzi is vacating to run for governor. She said the anti-filibuster cause now resonates with Democratic voters “across the board.”

Inaction on Biden’s agenda, she added, would make her race — which Republicans are targeting — or any other Democrats’ more difficult in November.

“It’s going to make our jobs [as candidates] significantly harder because voters will throw their hands up, and they will sit home. That’s what I think will happen,” D’Arrigo said. “Now, there are ways to combat that, and I think it starts by exciting the base and giving them something to vote for.