With WWDC22 wrapping up today, I wanted to reflect on what stood out the most for me about the announcements Apple made during Monday’s keynote. Beyond all the new software features coming to iOS 16, iPadOS 16, WatchOS 9, and macOS 13 Ventura, it’s the new hardware that got me the most excited.

It’s really no surprise: I’m a long-time Mac user (20+ years) and I don’t daily drive an iPhone (I prefer Android). Plus, I love great hardware. So obviously, Apple’s new M2 MacBook Air is what got my attention. And while some of macOS 13’s new features are very welcome (Stage Manager and Continuity Camera come to mind, in particular), Ventura seems to be more of a minor “toc” update in macOS’ “tic-toc” software lifecycle. 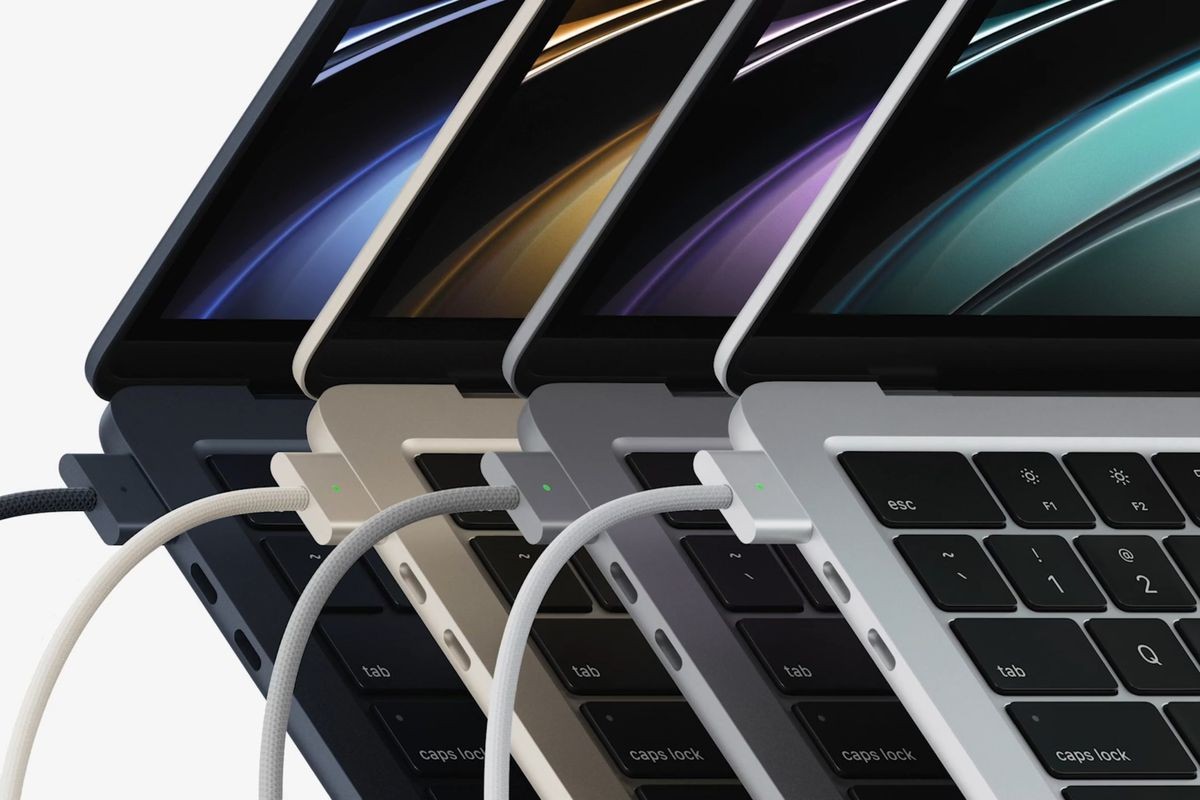 So, let’s talk about this M2 MacBook Air. On the surface, it’s basically a MacBook Air wearing the M1 MacBook Pro’s new industrial design, complete with MagSafe and a notch for the webcam. The MacBook Air’s iconic wedge shape is gone, replaced instead by a slimmer overall (11.3mm / 0.44in) and lighter (1.24kg / 2.7lbs) iPad Pro-like “slab” design – and available in four colors (Silver, Starlight, Space Gray, and Midnight).

What didn’t make the cut are the long-rumored iMac 24-inch colors. Oh, how I would have loved a purple MacBook Air with a white keyboard and white screen bezels! Instead, we got a slightly larger (13.6in) and brighter (500nit) Liquid Retina IPS display with support for more colors (1 billion) and slimmer bezels. And did I mention the notch?

Honestly, I still can’t get over Apple giving the latest MacBooks a notch. Sure, I’m happy with the much improved 1080p webcam, but the lack of Face ID makes this notch a questionable decision. On the plus side, the return of MagSafe is fantastic news, and so are the full-size function keys. Additional goodies include a four-speaker sound system and a headphone jack that supports high-impedance headphones. 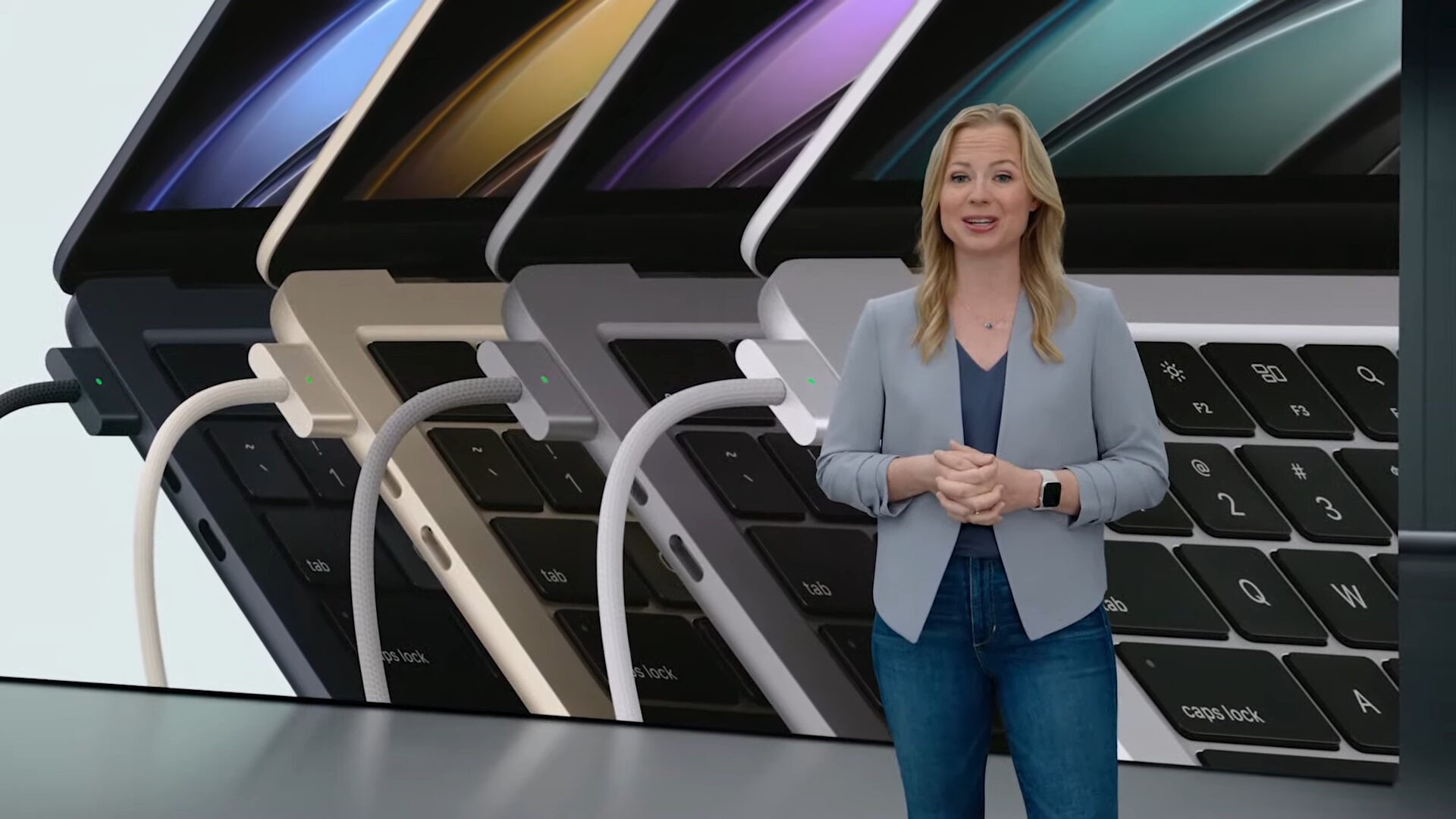 But obviously, the big update with this new MacBook Air is Apple’s new M2 processor. Frankly I wasn’t expecting Apple to announce this M2 chip at WWDC22 – at least not in a MacBook Air. I somehow assumed this SoC (system-on-a-chip) would debut in a redesigned Mac mini. But here we are. Apple claims the M2 delivers a 1.4x performance boost over the M1 with no change in battery life (18 hours).

In fact, it’s $200 more expensive than the equivalent M1 MacBook Air, which is still available from Apple in the base configuration for $999. It’s also worth mentioning that Apple also updated the MacBook Pro 13” with the M2 processor at WWDC22 – yes the old MacBook Pro 13” design with the annoying Touch Bar. Why? Nobody knows. To make matters even more confusing, it costs $100 more than the M2 MacBook Air.

But pricing hike aside, I think the new M2 MacBook Air delivers something that’s significantly more important than a sexy redesign and better specs. The return of MagSafe, the improved webcam, and the headphone jack sticking around are more proof that Apple listens to its users – not just its “Pro” Mac users. And that’s a big deal.

It’s something that started when Apple abandoned the infamous butterfly keyboard and hit full stride with the introduction of the M1 MacBook Pro, which dropped the gimmicky Touch Bar, and reintroduced the SD card slot and HDMI port. As a result, the MacBook lineup has never been better than it is today. So here’s my takeaway: WWDC22 wasn’t about the software, or even the hardware. It was about Apple listening to its users.