There’s never been a better—or more overwhelming—time to be a TV fan.

From broadcast favorites to binge-worthy streaming shows to reality TV obsessions, 2022 brought something to the table for everyone—and plenty of shocking moments along the way. But it’s nearly impossible to keep track of everything.

Don’t worry, we’ve got you covered.

The year brought the return of shows like The White Lotus, Stranger Things and Euphoria, new gems like House of the Dragon, The Bear and Wednesday, plus juicy reality drama on Love Is Blind, RuPaul’s Drag Race and Survivor.

We also said goodbye to some of our favorites like Dead to Me, The Walking Dead and Better Call Saul, though they will live on in our hearts—and on various streaming platforms.

So, to celebrate the year in television that was, we rounded up all of our picks for the most surprising, jaw-dropping and emotional—and sometimes all three at once!—moments from 2022.

Beware, spoilers abound! If you haven’t caught up on everything you wanted to watch this year, may we suggest you do that first and then come commiserate with us after.

For the biggest TV moments of 2022, keep scrolling. 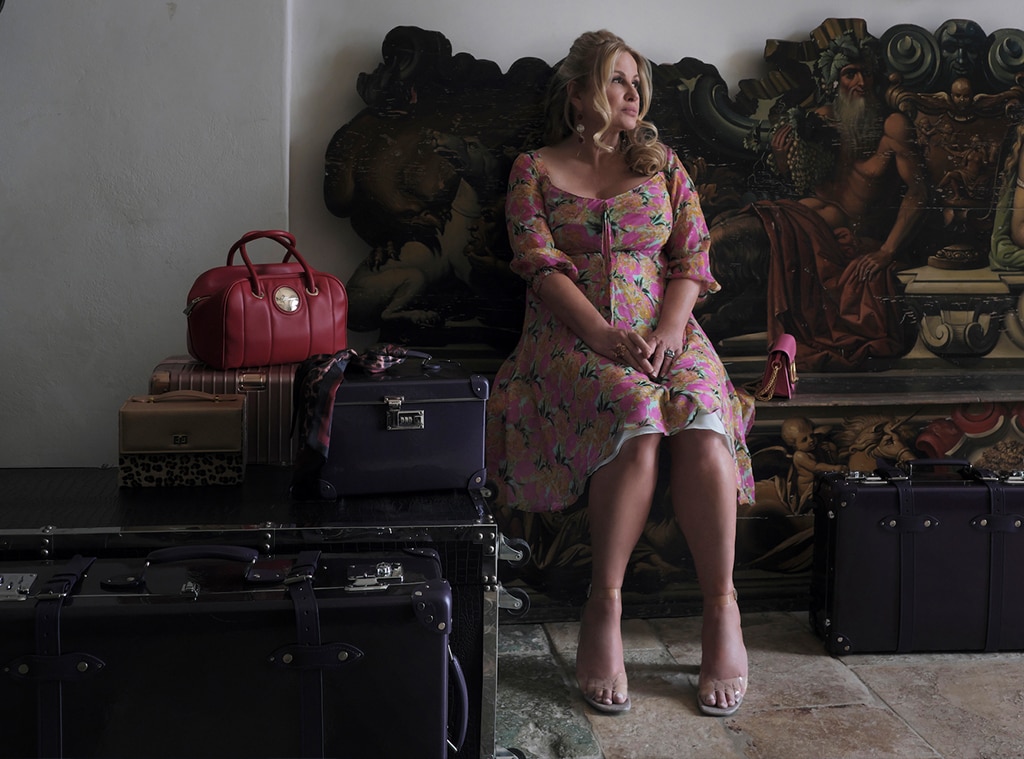 Jennifer Coolidge returned as Tanya McQuoid in season two of HBO’s The White Lotus and despite her sheer willingness to trust just about anything and anyone, she almost made it out of the second season alive. Though her line reading of “Please, these gays are trying to murder me” in the season two finale become instantly iconic, Tanya actually died by her own hand after falling overboard while trying to escape on a dingy.

After going on a murderous killing spree of her own, of course. 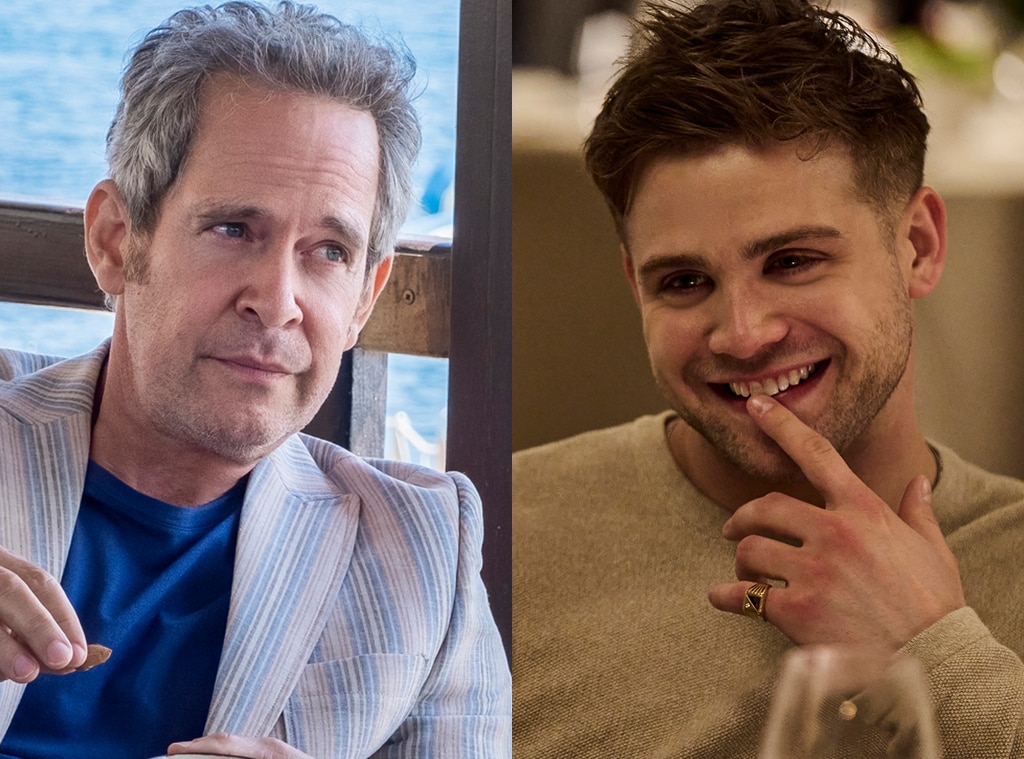 Jack and Quentin Are Discovered, The White Lotus

On the topic of The White Lotus, it would be impossible to discuss the season’s shocking moments without discussing the revelation at the end of the season’s fifth episode, in which Tanya stumbles upon Jack (Leo Woodall) having sex with his “uncle” Quentin (Tom Hollander).

While it becomes immediately clear that Jack is not actually Quentin’s nephew, it made for quite possibly the most jaw-dropping moment of the year.

“In a way, it was ‘Ah, there it is! There’s that scene!'” Hollander exclusively told E! News in November. “That unforgettable moment where someone pulls back a curtain and you see something that is intensely private that is not supposed to be watched by everyone else.” 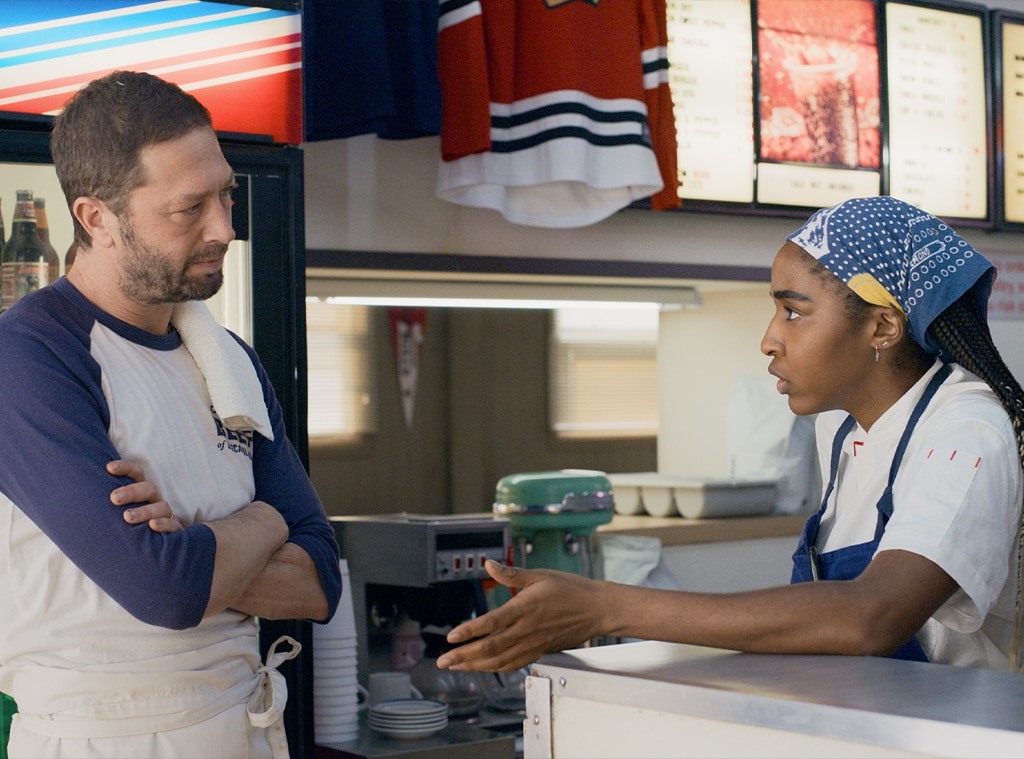 This had us saying “Noooooooooooo, Chef.”

As if the chaotic seventh episode of FX’s The Bear wasn’t stressful enough, it all culminates with Sydney (Ayo Edebiri) accidentally stabbing Richie (Ebon Mass-Bachrach) after an absolutely frantic day that even the most copious amounts of giardiniera couldn’t fix.

OK, did we all want to stab Richie at some point during The Bear’s freshman season? Sure! Did we think it would actually happen? No! 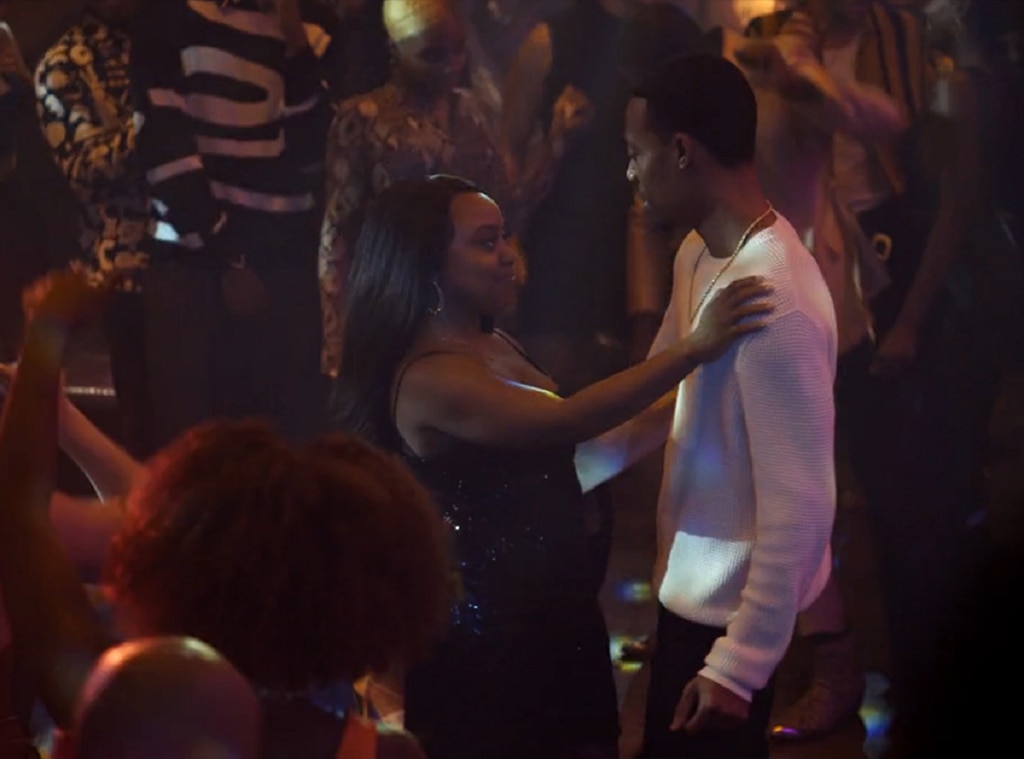 Sure, Abbott Elementary is about the failings of the public school system and the underpaid educators who bust their butts while operating under unfair working conditions—but it’s also about impatiently waiting for Janine (Quinta Brunson) and Gregory (Tyler James Williams) to kiss.

In the tenth episode of season two, we came close.

After running into each other at a hookah bar after school hours on the first night of winter break, Janine and Gregory started dancing seductively together. The music was right! Gregory’s hands were around Janine’s waist! Gregory was wearing a gold chain! The moment was right!

Alas, as their will they-or-won’t they tension was about to switch to will, they were interrupted by a jealous Ava (Janelle James) and the holiday magic was thwarted.

However, there was still a bit of sexual tension left in the tank. Once outside, the snow began to fall as Gregory and Janine figured out how to proceed with their evenings. Gregory, staring directly at Janine, called the moment “beautiful.” But that’s when Gregory’s girlfriend Amber (Nate’ Jones) texted him and, once again, all of the air was let out of the very seductive balloon.

We will one day see victory, Janine and Gregory shippers. One day. 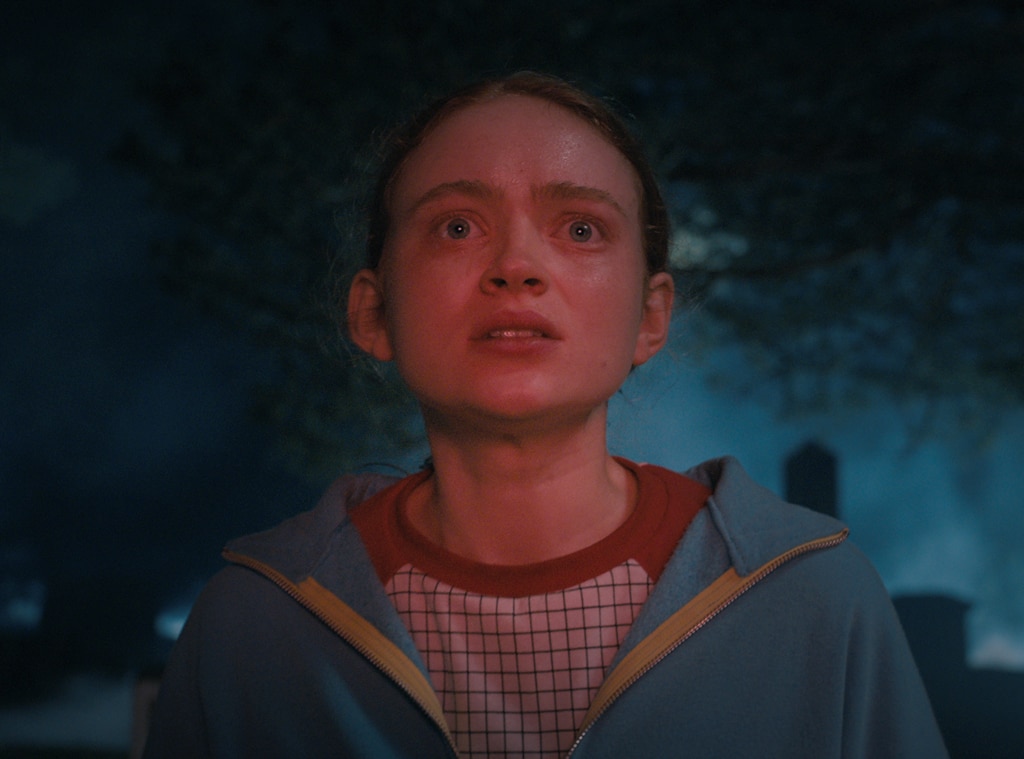 “Running Up That Hill” Helps Save Max, Stranger Things

We didn’t have “Stranger Things helps introduce an entire new generation to ’80s Brit synth-pop” on our 2022 TV bingo board, but that’s what makes life worth living!

In the fourth episode of the Netflix drama’s fourth season, Max (Sadie Sink) becomes possessed by Vecna (Jamie Campbell Bower) and is transported to an altar inside his mind.

Luckily, the trio of Steve (Joe Keery), Dustin (Gaten Matarazzo) and Lucas (Caleb McLaughlin) are there to save the day.

After Nancy (Natalia Dyer) and Robin (Maya Hawke) inform the trio that playing music can thwart Vecna’s spell, they hit play on Kate Bush’s “Running Up That Hill (A Deal With God),” Max’s favorite song, on a cassette tape. The iconic song opens a portal, allowing Max to narrowly escape.

Not only was Max’s life spared, it also gave Kate her first top 10 U.S. hit ever—nearly 40 years after the song’s initial release. Good news all around. 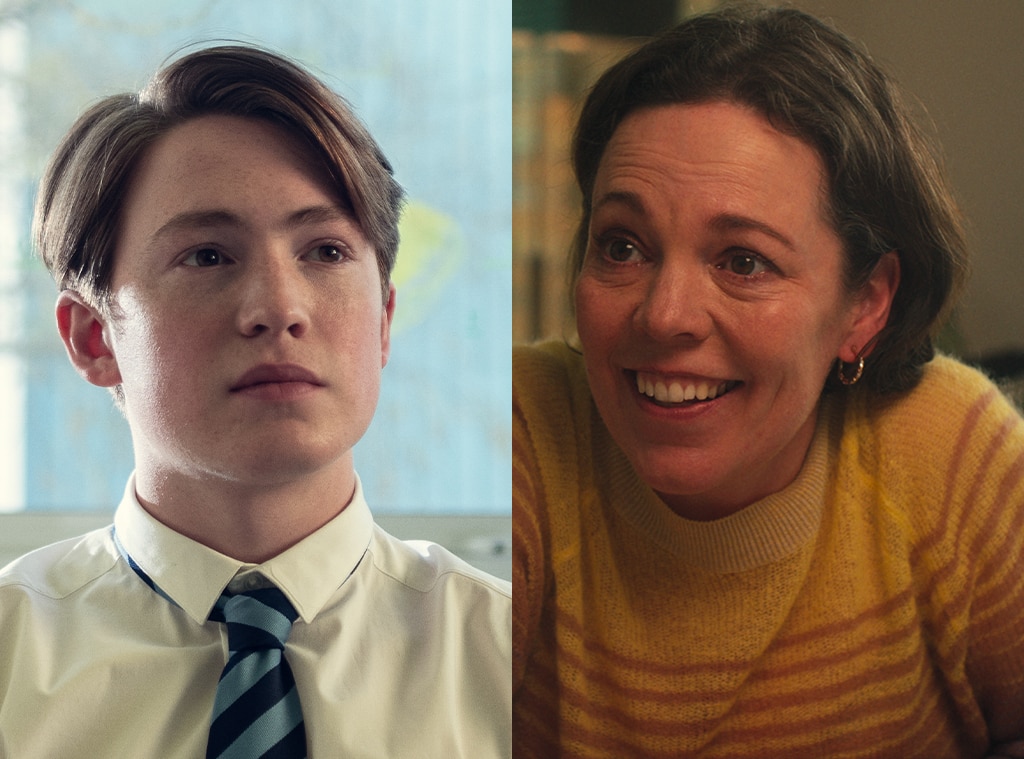 Nick Comes Out to His Mom, Heartstopper

While certainly not one the most shocking moments of the year, Nick (Kit Connor) coming out to his mother Sarah (Olivia Colman) during the season finale of Netflix’s Heartstopper was easily one of the most beautiful.

“Mom, you know Charlie’s like my best friend,” Nick says about his relationship with his schoolmate, played by Joe Locke.

When Sarah immediately pushes back and says Charlie can’t come on vacation with with them, Nick responds, “No, that’s not what I was going to say.” In an instant, Sarah knows they are having a much different conversation.

“He’s my boyfriend,” Nick says. “Charlie’s my boyfriend. I still like girls, but I like boys, too. Me and Charlie, we’re going out. I just wanted you to know.”

Sarah embraces him, saying, “Oh baby, thank you for telling me. I’m sorry if I ever made you feel like you couldn’t tell me that.” 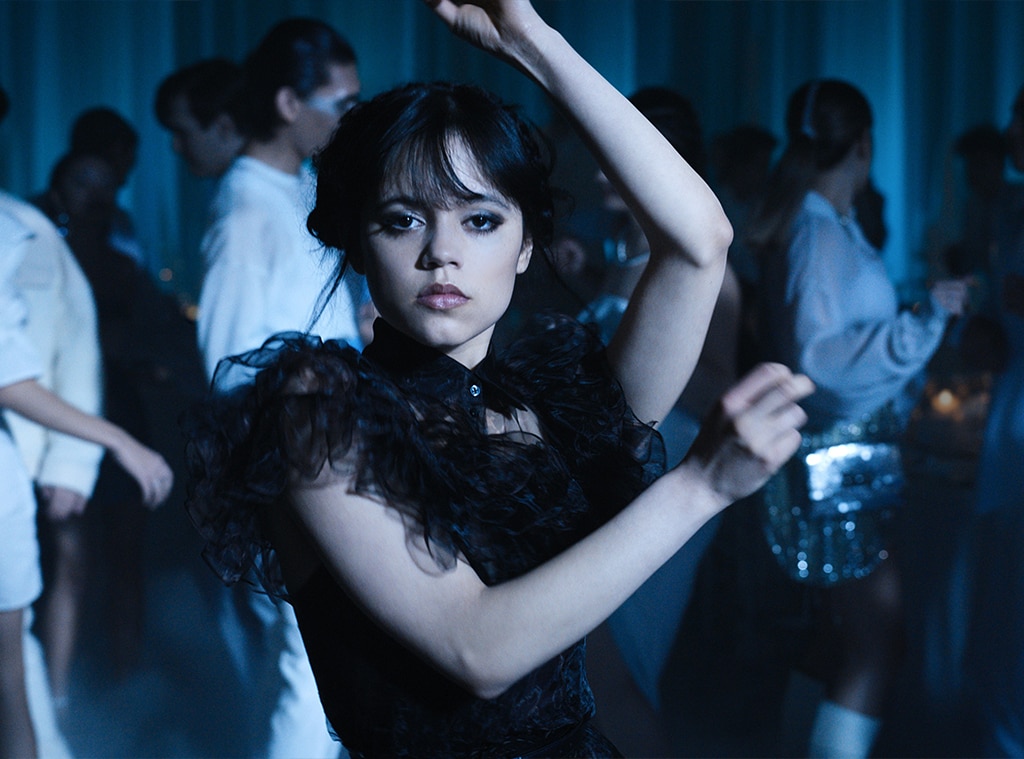 Not to be outdone, Wednesday Addams (Jenna Ortega) also had her own viral music moment—and it might have been even spookier.

During the fourth episode of the Netflix horror comedy’s first season, Wednesday performs an interpretive dance set to The Cramps’ 1981 song “Goo Goo Muck.” The dance went viral on TikTok and, as it turns out, the captivating routine was choreographed by Jenna herself. 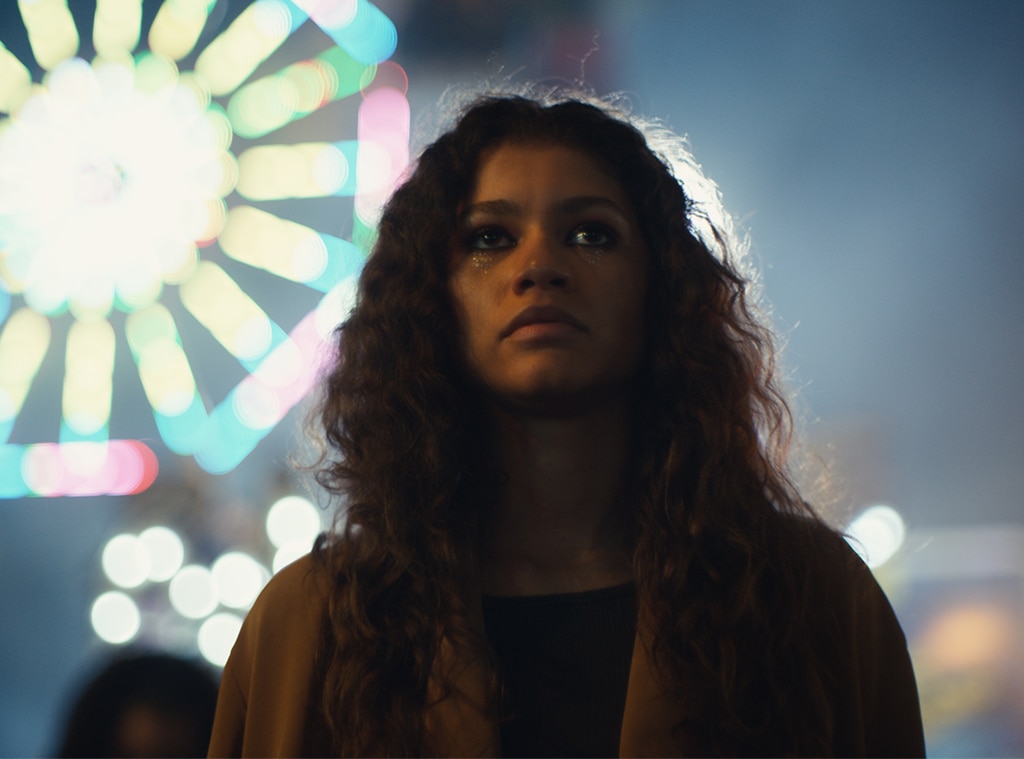 In truth, a number of moments from the second season of Euphoria could have made the list—but we went with the one that left the most harrowing mark.

During the HBO drama’s fifth episode, all of Rue’s (Zendaya) dealings and missteps finally catch up with her, culminating in an hour of television as brutal and intense as it is riveting. After Rue’s mother Leslie (Nika King) attempts an intervention after being made aware of her daughter’s descent back into addiction, the episode finds Rue on the run—from herself and her surroundings, which are closing in all around her.

“I’ve had a lot of people reach out and find so many parallels from all ages, all walks of life,” Zendaya told Entertainment Weekly about her performance, which earned her a second Emmy in September. “So many parallels with Rue and her story and Rue means a lot to them in a way that I can understand, but also maybe in a way that I could never understand, and that means that means the most to all of us.” 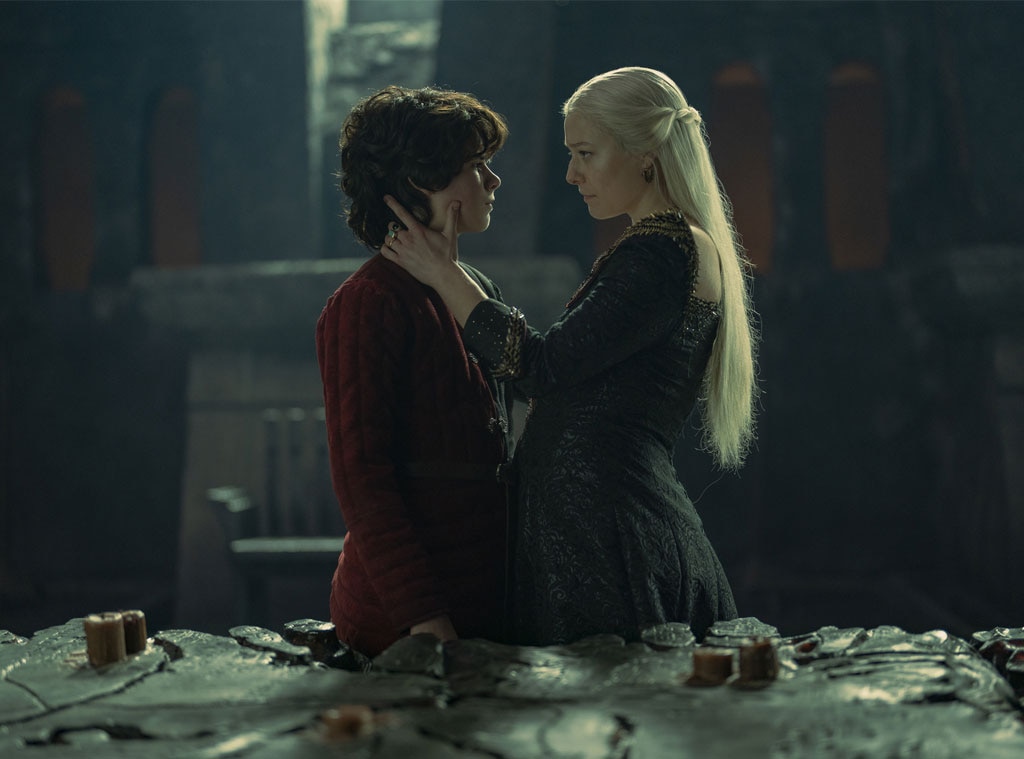 We knew House of the Dragon wasn’t going to be easy viewing, but we hoped it wouldn’t be this brutal.

In the final episode of the first season, Lucerys Velaryon (Elliot Grihault) is sent by his mother, Rhaenyra Targaryen (Emma D’Arcy), to visit Westeros in order to rile up support for her claim to the Iron Throne.

Once there, however, disaster struck.

Lucerys was confronted by his uncle Aemond (Ewan Mitchell), which ultimately led to Lucerys’ dragon Arrax blowing fire at Aemond’s dragon Vhagar. Dragons, as you may have guessed, don’t take kindly to being on the other side of fire-breathing mischief—so Vhagar retaliated, killing Arrax and Lucerys.

Let the Dance of the Dragons begin.