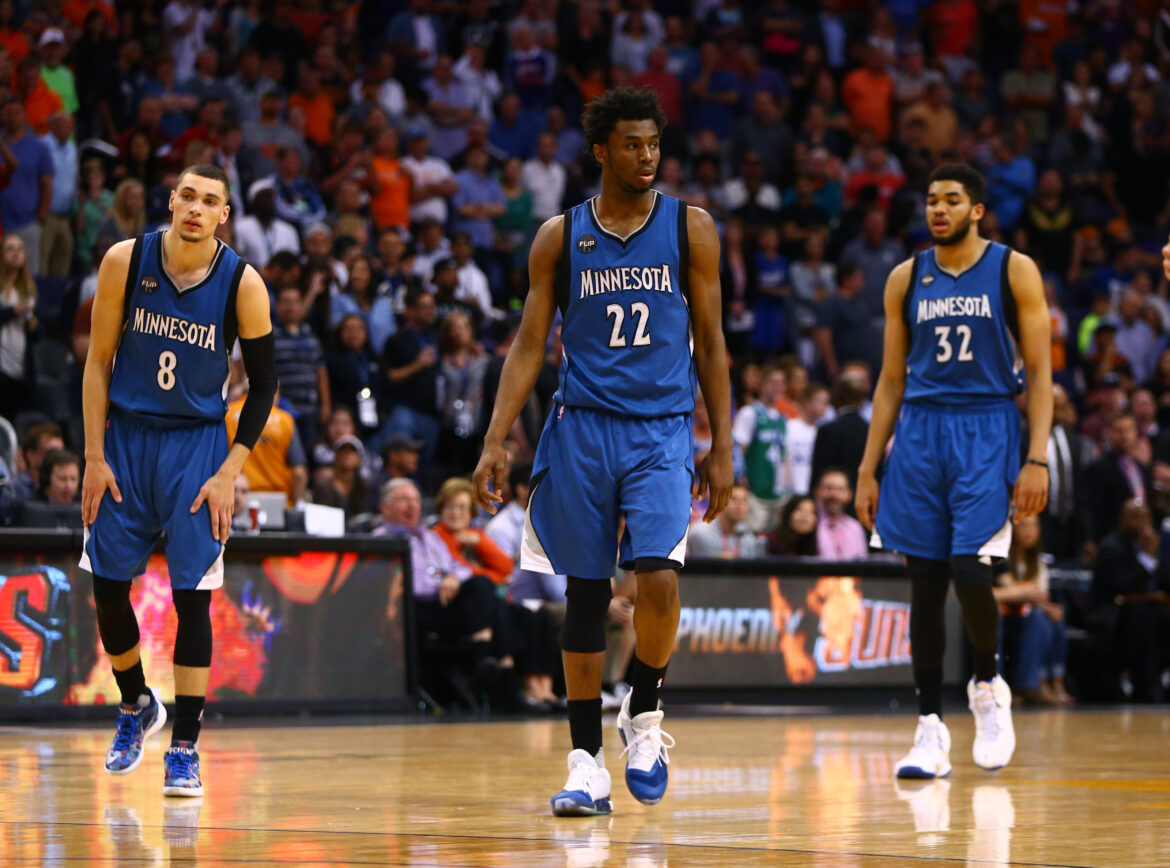 The Golden State Warriors have officially won the West and the Boston Celtics have an opportunity to finish the Miami Heat tonight and take the East. With the NBA Finals looming I tapped in some of the best minds from The Step Back and FanSided’s NBA network to break down some of the biggest lingering questions.

1. It looks like Andrew Wiggins may get a ring this year. Which of his former teammates — Zach LaVine or Karl-Anthony Towns — has the best chance of getting one next?

Ben Ladner, The Step Back: I think Towns has a better shot because we know with some level of certainty where he’ll be playing the next few seasons and his current situation is more promising. The Wolves were competitive in the playoffs against one of the five best teams in the NBA this year, while the Bulls were essentially helpless against the Bucks even after Khris Middleton got injured. If LaVine bolts for a legitimate title threat this offseason, the answer changes, but until then, Towns is in a better spot.

As an aside, I’m really digging the version of Wiggins we’ve seen in the playoffs and genuinely happy to see him playing a key role on a winning team. I wasn’t a fan of his game at all in Minnesota and wrote him off pretty early in his career as a result, and I was really discouraged by his initial fit in Golden State’s offense. But the way he’s committed himself on defense and transformed his offensive game into something a contender can work with has been fun to watch, and as Ian noted last week, he looks happier and more engaged than ever before.

Micah Wimmer, The Step Back: As I type this, neither LaVine nor Towns are especially close to winning a championship. Both are All-Star talents on playoff teams, but it’s impossible to classify the Wolves or the Bulls as title contenders. I would pick Towns by default though since it’s easier for me to imagine Minnesota taking a leap in the near future than Chicago, simply due to the relative age of their best players.

I won’t say that the Bulls are currently as good as they can possibly be but that I don’t see DeMar DeRozan, Nikola Vucevic, or LaVine really making enough strides to reach contender status, even if Patrick Williams and Ayo Dosunmu continue to improve.

On the other hand, the Wolves have Anthony Edwards who often looked like That Guy in the play-in game and Minnesota’s first-round series against the Grizzlies. He and Towns could soon be one of the most lethal offensive duos in basketball. Edwards could be special, and if some of the Wolves other young talent develops alongside him, they could be a tough out in the Western Conference for many years, if not more. I’m not saying Minnesota is especially close to contention, but that the path to it currently appears clearer for them and Towns than it does for Chicago and LaVine.

Jordanna Clark, Nothin’ But Nets and Daily Knicks: Hmm, I think Karl-Anthony Towns. Who knows what’s going to happen with Zach LaVine in free agency, but it’s not looking like he’s going to re-sign with the Bulls this summer. And even if LaVine signs with the Lakers (a rumor that I’ve seen floating around), he won’t be the fix that LA is hoping for. Not to mention, LeBron’s future with the Lakers is uncertain, but all of this is assuming that LaVine will end up in purple and gold. Even if he does stay in Chicago, I really like what’s going on in Minnesota. I think that the Timberwolves just got a huge boost too with the addition of executive Tim Connelly. Minnesota put up a tough fight in the playoffs as well and should continue to be on the rise with KAT and young players like Anthony Edwards.

2. Rate your frustration at traditional positional designations forcing Joel Embiid to Second Team All-NBA, on a scale from stubbing a toe to taking a big gulp of what you think is milk but is actually orange juice.

Ben Ladner, The Step Back: Somewhere in the “there’s a mosquito circling my head on a humid summer afternoon.” It’s definitely annoying but probably something I just have to live with, complaining about it won’t do much good and I’m definitely not going to tweet about it. Should we reform the awards voting process? Absolutely. Was Joel Embiid one of the five best players in the NBA this season? Without question. Will being selected to the Second Team instead of the First diminish his legacy 30 years from now? Probably a little bit. But after another year of insufferable and inescapable NBA awards discourse, I’ve lost the ability to care about this specific issue. Besides, the real crime on the All-NBA ballot was Devin Booker making the First Team over Steph Curry.

Micah Wimmer, The Step Back: My frustration level is about what it is when I stop at the local frozen custard spot on my drive home and they don’t have any daily flavors I’m particularly excited about. Even when they don’t have a great flavor of the day, there’s still the ever-reliable vanilla (or a sundae if I’m feeling real indulgent). And at the end of the day, I’m still getting custard. It’s not ideal, but it’s not worth getting too upset about either.

Look, this is not going to affect Joel Embiid’s legacy in any tangible way. It’s very hard to imagine someone in the future trying to tear him down by saying something like “Sure, he was All-NBA, but only on the Second Team!” If someone cares enough to make arguments that granular, then they will likely also know that Embiid finished second in MVP voting. If you are truly struggling with this, I recommend getting some frozen custard soon. It’ll cheer you up.

Jordanna Clark, Nothin’ But Nets and Daily Knicks: I prefer orange juice over milk, so I’m going to go with stubbing your toe because that’s an unimaginable amount of pain. I think that the traditional positional designations need to be a thing of the past, but somehow I still came across a few comments from people who were surprised that Jokic made the First Team over Embiid. That was confusing because of course the MVP was going to get the nod over Embiid.

3. If you’re Sean Marks, what would you do with Kyrie Irving this offseason?

Ben Ladner, The Step Back: I would let him walk, but I doubt that’s what Sean Marks will do. Kristian Winfield of the New York Daily News reported earlier this week that not re-signing Irving could cost the Nets Kevin Durant as well, which leaves Brooklyn with two choices: they can keep Irving and Durant around, deal with the drama and dysfunction Irving will inevitably cause, hope Ben Simmons and Joe Harris can get back to their peak levels of play and still struggle to defend in the playoffs; or they can let Irving walk, acquiesce to a potential Durant trade request and try to restructure their team around whatever return they get in that deal.

Maybe the Nets even convince Durant to stick around without Irving. In any case, I don’t think the team will win a championship in the near future, and I wouldn’t want to put up with Irving’s nonsense unless I had a great shot to win a title. Maybe I’m just lower on Durant, Irving and Simmons than some people, but I don’t think this is a team worth keeping together at all costs, which should at least make the Nets open to other options.

Micah Wimmer, The Step Back: If I were Sean Marks, I would not offer Irving a long-term contract, at least not without some clauses regarding his availability that I’m not sure the Players Association or CBA would allow. In lieu of that, I would likely offer him a one-year “Prove It” deal or a two-year contract with a team option for the second year, though I’m not sure how likely he would be to accept it. No one can deny Irving’s talent, but the bigger question for Marks and the Nets is just how much that talent matters in light of everything else that comes with it.

The big concern for the Nets is how Kevin Durant will react if he sees a less-than-max offer as disrespectful to his friend. Considering that the two joined Brooklyn as a package deal, it’s certainly possible. In three seasons with the Nets, Kyrie has played 116 games, including the postseason. Nothing has gone the way Brooklyn had hoped it would since they signed Durant and Irving three years ago. They’re both stars, but is it really advisable to double down on a bet that hasn’t paid off yet?

Jordanna Clark, Nothin’ But Nets and Daily Knicks: I think that the Nets should offer Kyrie Irving an extension, but a long-term one? Eh, probably not. Eh, probably not. If Irving declines his player option and becomes a free agent, the Nets won’t have the money to replace him, so that’s something that Sean Marks should try to avoid at all costs. Time’s ticking and Kevin Durant isn’t getting any younger, so the Nets should still be in win-now mode. Although Irving’s (lack of) availability was a huge concern this past season, and who knows what the future will hold, the Nets need to do what they can to sign him to an extension, but within reason.