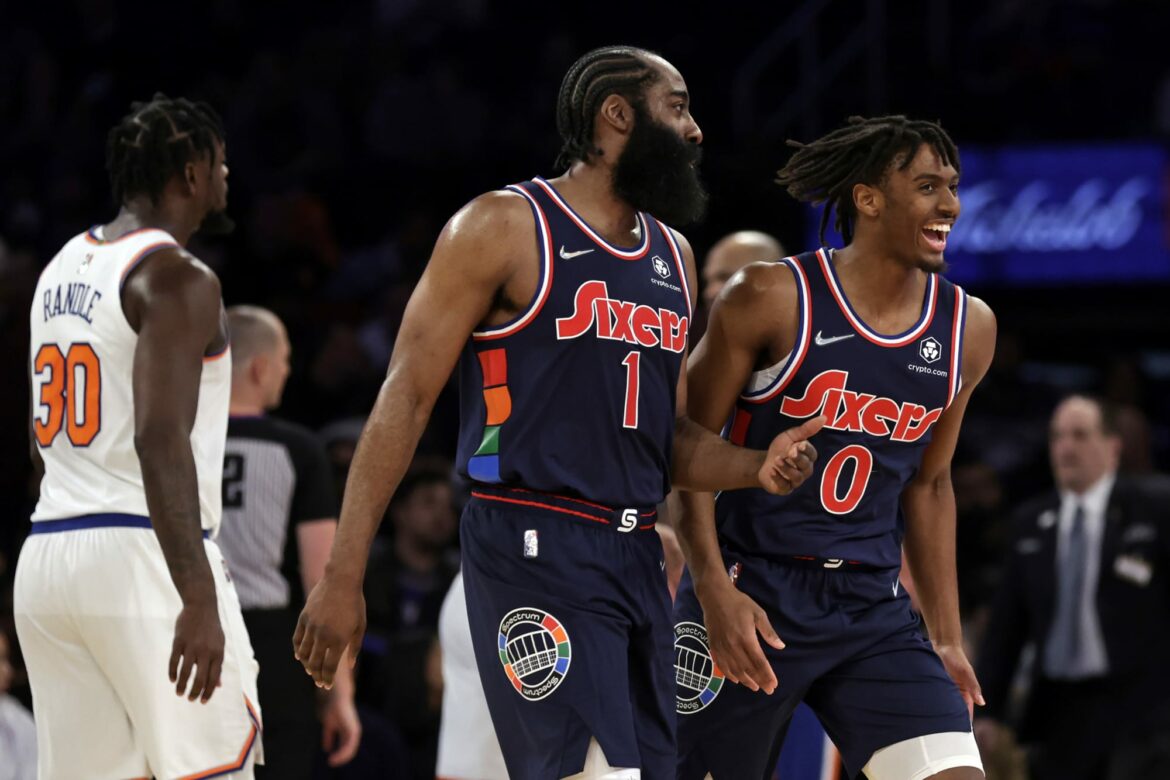 After the 76ers’ acquisition of James Harden, the biggest question was how his ball-dominant style would mesh with Joel Embiid. Of slightly less visceral importance, was how Harden would affect Tyrese Maxey, the starting point guard in the midst of a breakout campaign in his second season.

So far, everything seems to be going the 76ers’ way.

In the two games since Harden made his 76ers debut, Maxey and Harden have played 53 minutes together and Maxey’s per-36 minute averages for that time work out to 25.8 points, 2.7 rebounds, 2.0 assists and 2.7 steals, on an 81.2 true shooting percentage. As you would expect, he has had far less responsibility for primary creation (average time of possession has dropped from 6.6 minutes per game to 3.8). But when he is getting opportunities to create it’s against a defense whose main focus is elsewhere.

But, overall, he’s been much improved as a catch-and-shoot threat this season (hitting 40.2 percent) and he should get a lot more of those looks with the ball in Harden’s hands instead of his own.

And spending more time spotting up also gives him more opportunities to attack closeouts which is a great fit for his aggressive scoring mentality on the drive.

Maxey may always have been a bit miscast as a primary point guard and his skills and tendencies seem far better suited to attacking to score. There was concern that the addition of Harden could stunt his growth but, as of right now, it looks like it may just allow him to focus on what he does best and perhaps even take his impact to another level.

If you’re the kind of fan who devours misery for LeBron and the Lakers, then Tuesday night’s loss to the Mavericks was an absolute feast.

The Soup Course: Luka Doncic, who has taken prodigious criticism for being out of shape, was throwing down put-back dunks.

The Appetizer: Russell Westbrook finished the game 5-of-17 from the field, including 0-of-4 from beyond the arc. Five of his 12 misses were blocked, including some embarrassingly woeful attempts.

The Salad Course: Stop me if you’ve heard this one before — LeBron James complaining to the refs about a no-call while his team gives up a dramatic transition dunk going the opposite direction.

The Main Course: Luka Doncic, who finished with 7 points and 2 assists on 3-of-5 shooting in the fourth quarter, repeatedly targeted LeBron down the stretch, forcing switches so he could iso on The King.

The Dessert: The five-point loss for the Lakers dropped them to 27-34 on the season. Only a two-game edge in the standings separates them from falling out of the play-in tournament completely and 538’s model currently gives them just a seven percent chance of making the playoffs.  11 in the lottery standings which means they’d send their top-10 protected first-round pick this year to the Memphis Grizzlies.

As part of our NBA at 75 series, the Over and Back NBA history podcast is rewatching some of the most pivotal Slam Dunk Contests in NBA history. They’ve already reviewed the 1984 (inaugural) 1986 (Spud Webb goes off), 1987 (Jordan arrives), 1988 (Jordan and Dominique duel) and 1993 (Harold Miner, baby!) contests. Check these out and stay tuned for more.

When he arrived as a rookie with the Golden State Warriors, the NBA had never seen anyone like Gilbert Arenas. It may never see anyone like him again.

A swarming, small-ball defense has helped them find momentum.

Everyone is gushing about Ja Morant and it still doesn’t feel like enough.

Malik Monk has been one of the precious few bright spots for the Lakers this season. But maybe he should figure out how to make his way to another team while the Lakers circle the drain?

From now on, James Harden and Joel Embiid will be known as The Bonus Brothers.