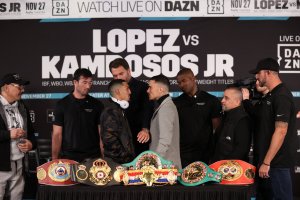 Teófimo López and George Kambosos went face to face in their last press conference before their fight this Saturday. The Madison Square Garden will host another historic match in which the World Boxing Association (WBA) Lightweight Super Championship will be at stake, along with the IBF, WBO, and WBC belts.

Lopez will make the first defense of his crowns, which he earned last year by beating Vasyl Lomachenko.  After being out of the ring for various reasons, he will return to try to prove that he is the best in the division.

Both spoke about what they expect from the fight but the friction between them was evident. Some strong words were exchanged before what promises to be a war this weekend.

Teofimo assured that New York is his home and that this gives him an advantage for the fight. He also promised that he will put on a great show and win.

Kambosos is not the favorite for the fight but he was very confident: “He doesn’t want it as much as I want it. Let’s see what he does after the first round, when I’m still standing there”.

The weigh-in ceremony will take place next Friday, where both boxers will have to weigh a max of 135-pounds. Teofimo and Kambosos are undefeated, the former has won 16 bouts with 12 KOs, while the latter has 10 KOs in 19 victories.