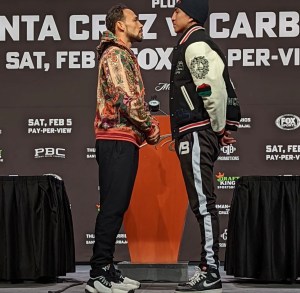 The present realities of Keith Thurman and Mario Barrios have certain similarities. Both are trying to recover and return to the top of boxing, that’s why they will fight this Saturday in an interesting welterweight bout.

It will be the main fight of the Premier Boxing Champions event, to be held at the Michelob Ultra Arena, in Las Vegas, Nevada, and has generated a lot of expectation.

Both are coming off defeats in which they lost their respective undefeated records and need to win to get back on track and become world champions again. It is a fight that looks pretty even on paper and promises good action.

Thurman has been out of action for almost three years and in his last fight lost to Filipino legend Manny Pacquiao in a WBA 147-pound championship bout. After overcoming that loss and several injuries, the 33-year-old “One Time” returns to the ring to prove that he is still one of the best in the division.

Barrios is much younger (26 years old) and he lost to Gervonta Davis in June of last year. The American of Mexican descent was stopped in 11 rounds and lost his WBA super lightweight crown, but now he has moved up in class and wants to stand out in this new division.