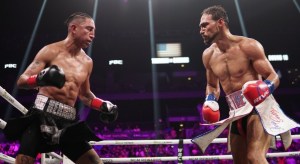 Last weekend had some good boxing action around the world but two fighters had the eyes of the world on them. Keith Thurman and Leo Santa Cruz made their returns to the ring after long periods of inactivity and both came out victorious.

Thurman hadn’t fought since July 2019 when he lost his undefeated record to legend Manny Pacquiao. The tough loss, combined with injuries he had endured for years, kept him away from the ring during that time but this Saturday he and Mario Barrios were the stars of the event in Las Vegas.

“One Time” looked good against a strong and warrior opponent like Barrios and won by unanimous decision. Although he had some trouble in the final rounds, he was able to dominate well to show that he is still one of the opponents to beat in the welterweight division.

Santa Cruz faced Keenan Carbajal in the same card and won by unanimous decision in 10 rounds. His last fight had been last October 31, 2020 against Gervonta Davis, a fight in which he lost by knockout.

The Mexican came back with his characteristic style and both Carbajal and him put on a great show for the audience. “El Famoso Terremoto” now thinks of better challenges and defending his WBA featherweight title against the winner of the fight between Leigh Wood and Michael Conlan.

Two great fighters are back to bring more excitement to their divisions and the boxing world is happy to see them back in action.