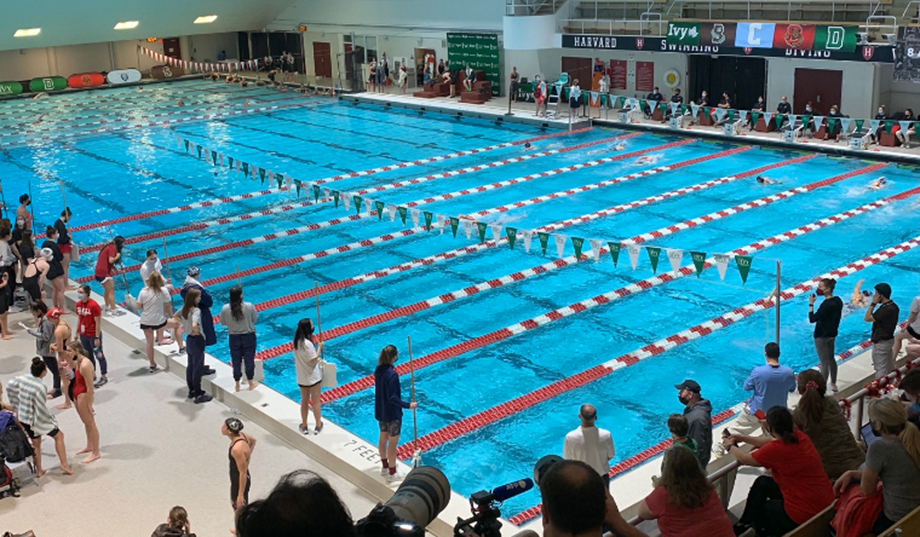 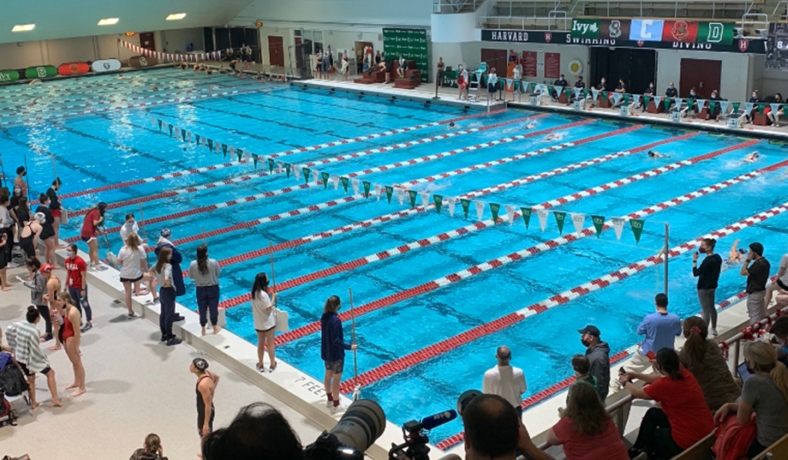 In lane four, Lia Thomas cruises past the halfway mark of the pool before most swimmers have completed the previous turn in a preliminary race on Thursday. (Isaac Schorr)

Boston — Lia Thomas, the transgender swimmer competing on the University of Pennsylvania’s women’s swim team, won a second individual event — the 200-yard freestyle, with a time of one minute and 43.12 seconds — at the Ivy League Championships on Friday evening after finishing first in the 500-yard freestyle the day before.

That’s a pool and meet record. Thomas had set the previous pool record in the event earlier in the day.

Thomas had earned the first seed in Friday evening’s final earlier in the day, finishing 1.75 seconds ahead of the nearest challenger. In the 500-yard finals on Thursday, Thomas finished a whopping 7.5 seconds before the second-place finisher en route to setting another pool record.

The participation of Thomas has been a major story line throughout this season. The more success the swimmer has enjoyed, the more opponents — and teammates — have spoken out about Thomas’s competitive advantage.

Just last month, 16 of Thomas’s teammates at UPenn signed on to a letter urging UPenn and the Ivy League not to reject U.S. Swimming’s and the National Collegiate Athletic Association’s (NCAA) recent determination that male-to-female transgender swimmers must spend three years on testosterone suppressants before competing. Thomas was grandfathered in so that the swimmer could continue to participate for the remainder of the season despite having sat out just one year.

Critics of the testosterone-based standards argue that they do not take into account an athlete’s bone density, accumulated muscle mass, and other physical advantages conferred by having undergone male puberty.

Thomas’s teammates asserted that “biologically, Lia holds an unfair advantage over competition in the women’s category, as evidenced by her rankings that have bounced from #462 as a male to #1 as a female.” The athletes put their names to that argument despite the fact that Thomas’s participation has been a great boon to the team. Thomas is a participant in the team’s relays — in the 800-yard freestyle relay on Wednesday, Thomas put up the fastest split time of any swimmer — and Thomas’s individual scores contribute to the team’s overall output.

Thomas’s participation isn’t the only culture-war controversy to follow the athletes into Harvard’s Blodgett Pool. Iszac Henig, a swimmer from Yale who prevailed in the 50-yard freestyle on Thursday and took the bronze in the 100-yard butterfly on Friday in addition to contributing to relays — and who is transitioning from female to male — has been referred to as “he” by event announcers throughout the championships. Henig has not yet begun any hormonal treatments to aid the transition, which has mitigated most debate around the senior’s status on the women’s team.

Going into Friday evening, UPenn was in fourth place at the championships, in no small part thanks to Thomas’s dominance to date.

The NCAA explained its decision to allow Thomas to participate at the Ivy League and NCAA championships by issuing a statement asserting that “implementing additional changes at this time could have unfair and potentially detrimental impacts on schools and student-athletes intending to compete in 2022 NCAA women’s swimming championships.”