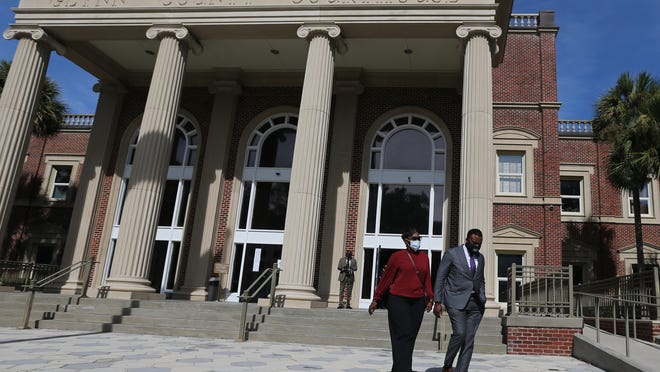 BRUNSWICK, Ga. — Jury selection began Monday in the murder trial of the three white men charged in the death of Ahmaud Arbery, a 25-year-old Black man who was shot while out jogging in this small coastal Georgia town last year.

Court officials in Glynn County expect a lengthy and challenging jury selection. Jury duty notices were mailed to 1,000 people, and 600 were directed to appear Monday in a nearby gymnasium. The court could not immediately say how many arrived.

When asked by the judge, only one prospective juror indicated they were neutral on the case, and about half said they were already leaning toward either side – an early indication of the difficulty of seating a jury in the high-profile trial.

A ‘lynching’ or self-defense? 3 Georgia men go on trial in the 2020 murder of Ahmaud Arbery

One prospective juror told the court he had seen so much about Arbery’s killing in the news and on social media that he was “sick of it.” The man said he shared cellphone video of the shooting on social media and discussed the case with his brothers, one of whom was also mailed a jury summons in the case.

“This is a case that has garnered significant attention in this community as well as around the country, and I have no doubt that the thousand or so individuals that were summoned, when they received that summons, reacted in some way to that,” Walmsley said.

“This is not an easy thing for anybody,” he added.

Arbery was shot while jogging Feb. 23, 2020, in Brunswick, about 70 miles south of Savannah. Father and son Gregory and Travis McMichael and their neighbor William “Roddie” Bryan were charged with murder and other crimes. Bryan recorded part of the shooting in a graphic video that set off a national outcry and widespread media attention over the lack of arrests early in the case.

All three defendants were in court Monday, along with members of Arbery’s family. Attorneys on both sides were expected to spend the coming days questioning the jury pool, in groups and individually, to determine whether they have formed opinions about the case that render them incapable of serving.

Ultimately, the judge needs to seat a jury of 12, plus four alternates who will be on standby to fill in for any jurors who get sick or are dismissed before the trial ends. Once a jury is seated, the trial itself could take more than two weeks, Glynn County Superior Court Clerk Ronald Adams said.

Prospective jurors received a three-page pretrial questionnaire that asked what they already know about the case, where they get their news, whether they posted any online comments about Arbery’s killing, and whether they visited the scene of the shooting or did other research into the case on their own.

According to a list of questions read before the court Monday morning, attorneys also hoped to ask jurorsabout their thoughts on racism, the use of the “n” word, the Confederate flag and the Black Lives Matter movement. Walmsley ruled that the attorneys werepermitted to ask some of the questions.

Asked by the defense, nearly half of the prospective jurors in the first group indicated they had a “negative feeling” toward Travis or Gregory McMichael. When asked if they considered the Confederate flag to be a “racist symbol,” three jurors raised their hand.

Legal experts have said that although race likely won’t be a key strategy for the prosecution, they expect it to be prominent in the trial and have raised concerns the defense will try to exclude potential jurors based on race. Brunswick, which has just over 16,000 residents, is predominantly Black but sits in the overwhelmingly white Glynn County.

The court has not identified the race of any of the prospective jurors.

“I just want a conviction,” Marcus Arbery, Ahmaud Arbery’s father, said as he stood among the crowd. “They killed my son because of skin color. It’s really a racial hate crime.” 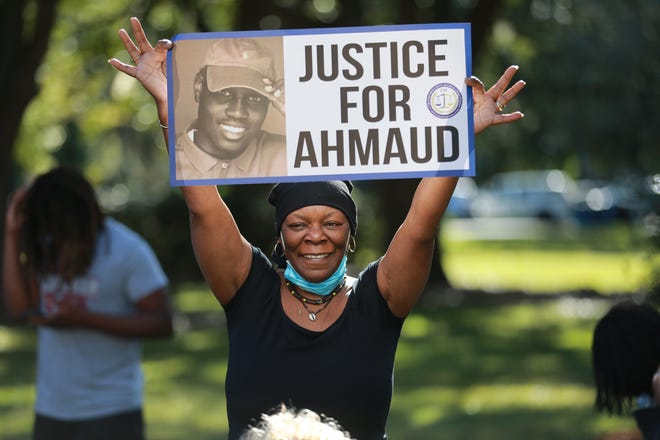 “It’s the first step in the journey to justice,” Crump said. “You cannot lynch a Black man in America in 2021 and think that it will be handled the same way that we handled matters back in the 1940s, in the 1950s.”

Dozens more from around the country set up chairs outside the courthouse – not to watch jury selection but to support the Arbery family. The crowd occasionally broke into chants of “Black Lives Matter” and cheered as the family and their attorneys walked past.

“They’re hurting,” said Peggy Harris, who took a 15-hour bus trip from Ferguson, Missouri. “He was somebody’s baby, you know? We wanted to be a beacon of light to them.”

Daniela Rodríguez, an immigrant from Mexico who grew up in Brunswick, said she came to the courthouse “to see justice happen and make Brunswick become a better place.” Rodríguez said she became a community organizer because of the racism she endured in the small town.

In addition to malice murder and felony murder charges, the three defendants have been charged with two counts of aggravated assault and one count of false imprisonment and criminal attempt to commit false imprisonment. The three also face federal hate crime charges and a wrongful death civil lawsuit filed by Arbery’s mother. 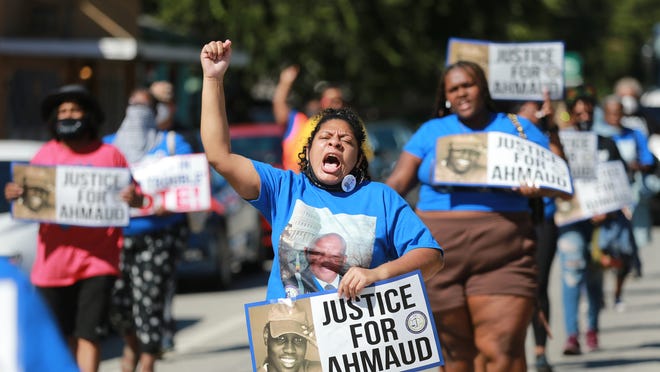