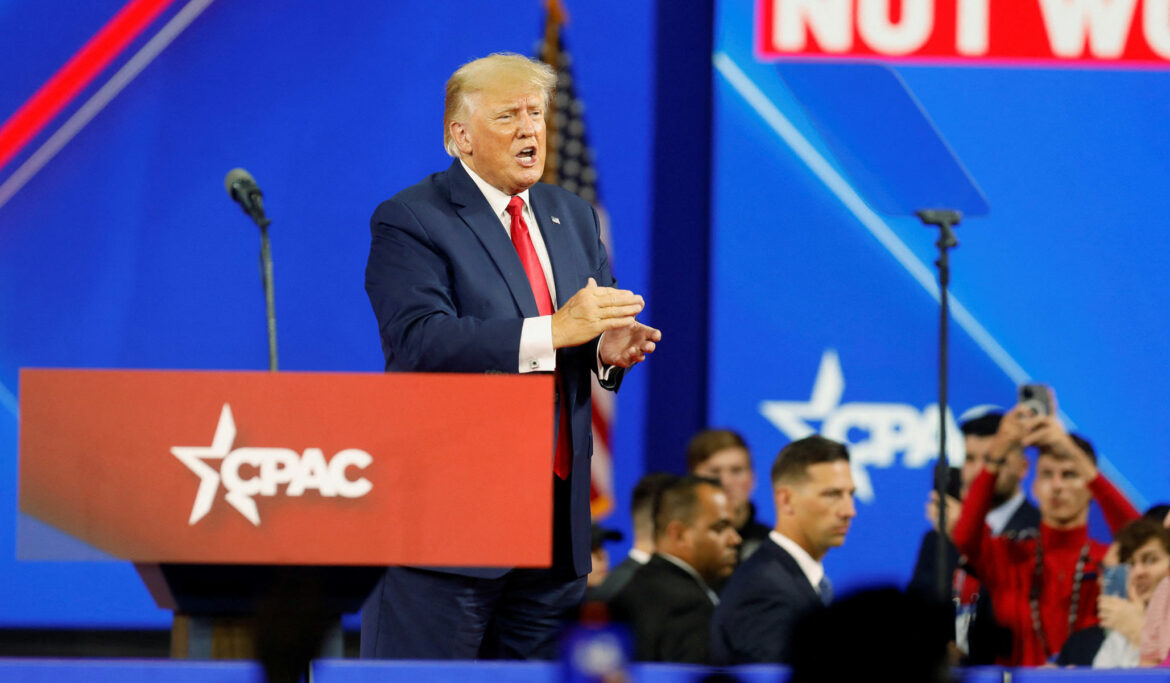 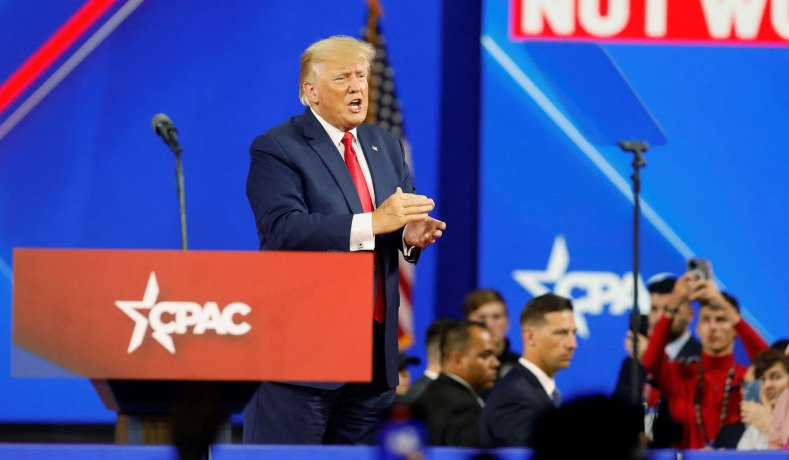 Speaking at the Conservative Political Action Conference Saturday night, former president Donald Trump argued that President Biden is to blame for the Russia-Ukraine crisis and claimed that Vladimir Putin would have never invaded his neighbor had he won the 2020 election.

Biden’s term has been marked by soaring inflation, supply shortages, exorbitant gas prices, illegal aliens flooding the country, spiking crime and lawlessness in cities — and foreign adversaries behaving aggressively because they do not fear or respect American leadership, Trump said.

“China is threatening Taiwan. Russia is decimating Ukraine. Iran is on the cusp of a nuclear bomb,” Trump said. He went on to slam Biden for the reckless exit from Afghanistan. While public opinion always favored withdrawal, Biden had no escape plan, leaving a power void to be occupied by the Taliban, he said.

“Joe Biden has turned calm into chaos, competence into incompetence, stability into anarchy, and security into catastrophe. The Russian attack on Ukraine is appalling. It is an outrage and catastrophe that should never have been allowed to occur. It never would have occurred,” Trump said.

Touting his administration’s triumphs on energy independence via the Keystone XL pipeline, a secure border, and a presidential term without a single armed conflict overseas, Trump said Biden reversed all the progress that he made.

“You could take the five worst presidents in American history and put them together and they would not have done the damage that Joe Biden and his administration has done in just a very short 13 months,” he said.

Trump said the mayhem in Europe could have been avoided if the 2020 election hadn’t been rigged, a theory he has maintained since that loss.

“Under our leadership, the world was a peaceful place because America was strong, and the perception of our country was perhaps like it had never been before. Powerful, cunning, and smart. We were a smart country. Now we are a stupid country. We always very simply put America first. That was the answer,” he said.

Trump touted his diplomatic successes in the Middle East and his iron-fist approach to China’s economic exploitation of America. The disaster in Afghanistan and Biden’s botched departure, which left numerous U.S. servicemen dead and Americans trapped in Taliban-occupied territory, emboldened Putin to invade Ukraine, Trump argued.

“I have no doubt that President Putin made his decision to ruthlessly attack Ukraine only after watching the pathetic withdrawal from Afghanistan where the military was taken out first. Our soldiers were killed and American hostages, plus 85 billion dollars’ worth of the finest equipment anywhere in the world were left behind,” he said.

While Trump insisted it’s “a good thing” to have a working relationship with dictators, he had been accused of being a crony of and too sympathetic to Putin while in office.

“No president was ever as tough on Russia as I was and the fake news would say ‘Trump loves Russia,’ we had the Russia hoax which is now with Durham and Mueller and the rest, a total hoax, fictional story,” he added. “With respect to what is going on now, it would have been so easy for me to stop this travesty from happening. He understood me and he understood that I did not play games.”

But while a corner of Eastern Europe has become a sudden powder keg of conflict, Trump said that it mustn’t distract conservatives from the culture war ongoing at home.

“As grave as the dangers are abroad, it is within that spells our doom. Our most dangerous people are people from within. They are people that must hate our country. They make us weak and they make our country unsustainable as a nation itself,” he said.

He said he’s seen that gender ideology has infiltrated the military, making it “obsessed with equity to all and only being politically correct.” He accused Biden’s Department of Homeland security of actively facilitating illegal immigration, inviting criminals into the interior. He blasted Biden’s Department of Energy and Interior for “forcing us to be reliant on foreign energy,” a problem exacerbated by the cancellation of the Keystone pipeline. He slammed Biden’s Department of Justice for “waging war on an opposing party and patriotic parents” who have protested radical curricula in their children’s schools.

As Ukraine faces bombardment and attack, Trump said America is being “invaded” too. While Democrats have been jumping to defend Ukraine’s borders and territorial integrity as “sacred,” they are destroying America’s sovereignty by allowing unprecedented illegal immigration, Trump claimed.

“You cannot defend western civilization if you would not be able to defend your own civilization, and that means we need borders that work, elections that are fair and free and not rigged, and crime that must immediately be stopped in our cities. And we must immediately stop the influx of illegal aliens,” he declared.

Touching on a multitude of other themes, Trump praised the Canadian trucker convoy that peacefully resisted the overstepping of its government in imposing a cross-border vaccine mandate, called for an “honest” media, demanded America reclaim its title as “number one energy superpower in the world,” and urged an immediate end to all Covid-19 mandates.

Addressing the suffering children have endured under pandemic restrictions, Trump said: “We will never forget what they did to our children. We will hold them accountable at the ballot box this November.” Democrats have been put on notice, Trump said, adding that “we’re taking back our country in 2022.” He stopped short of announcing a run for president in 2024.