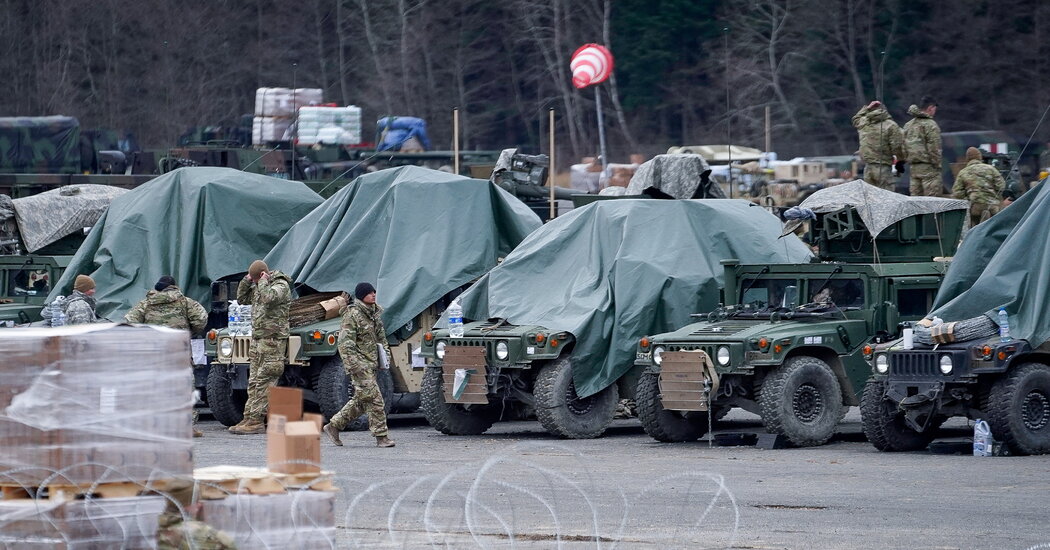 In addition, some 300 members of the 18th Airborne Corps headquarters, also from Fort Bragg, have arrived in Germany to oversee the reinforcements flowing into Eastern Europe. The 18th Airborne Corps and this headquarters unit are led by Lt. Gen. Michael E. Kurilla, whom President Biden has nominated to take over the military’s Central Command in April. And last Thursday, Mr. Austin said 125 Army troops in Germany would go to Bulgaria for training.

The Pentagon in recent days has also dispatched aerial reinforcements to Britain, Germany and Eastern Europe. The Air Force said F-35 fighters from Hill Air Force Base, Utah, deployed to Germany days after B-52 bombers from Minot Air Force Base, N.D., were sent to Britain in a previously planned mission.

Eight F-15s from Seymour Johnson Air Force Base, N.C., have flown to Lask Air Base in Poland to augment the eight American F-15s there that are usually stationed in Britain.

“The deployment of U.S. F-15s to Poland elevates the collective defense capabilities on NATO’s Eastern flank and the enhanced air policing mission,” Gen. Jeffrey Harrigian, the head of U.S. Air Forces in Europe and Africa, said in a statement.

Eight F-16s usually based in Spangdahlem, Germany, have also deployed to Fetesti Air Base, Romania.

The buildup of aerial forces in Eastern Europe carries risks. U.S. and Russian warplanes operating in the eastern Mediterranean Sea flew dangerously close to each other in three separate incidents earlier this month, including one in which the aircraft came within about five feet of each other, Pentagon officials said.

In addition to the deployments to Poland and Romania, the Pentagon has put 8,500 other troops in the United States on “high alert” for possible dispatch to Eastern Europe. Those troops would take part in a NATO response force that might soon be activated, military officials said.

The bulk of the troops being put on higher alert are active-duty ground troops, including combat brigades, and medical, aviation, transportation, intelligence and surveillance forces.