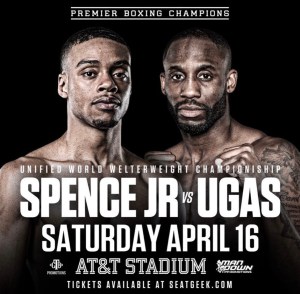 One of the most anticipated fights in the 147-pound division will finally take place and the event will be hosted by Premier Boxing Champions.

Ugas will make his first appearance since his big fight last August, in which he shocked the world and defeated Manny Pacquiao by decision. The Cuban returned to the gym months ago and has been waiting for confirmation of what he considers his biggest fight yet.

Spence will make his comeback after overcoming the accident he suffered a couple of years ago. The American is one of the most important names in the category and owner of two belts, so he starts as a favorite in the betting.

The lanky fighter has a nice boxing and a respectable punch, a style that will be very interesting in front of the Cuban school of Ugas.

The winner of the bout will take three of the four belts in the division and will only have to win the WBO belt, held by Terence Crawford. Ugas has a record of 27 wins, 4 losses and 12 knockouts, while Spence is undefeated in 27 fights, with 21 knockouts.