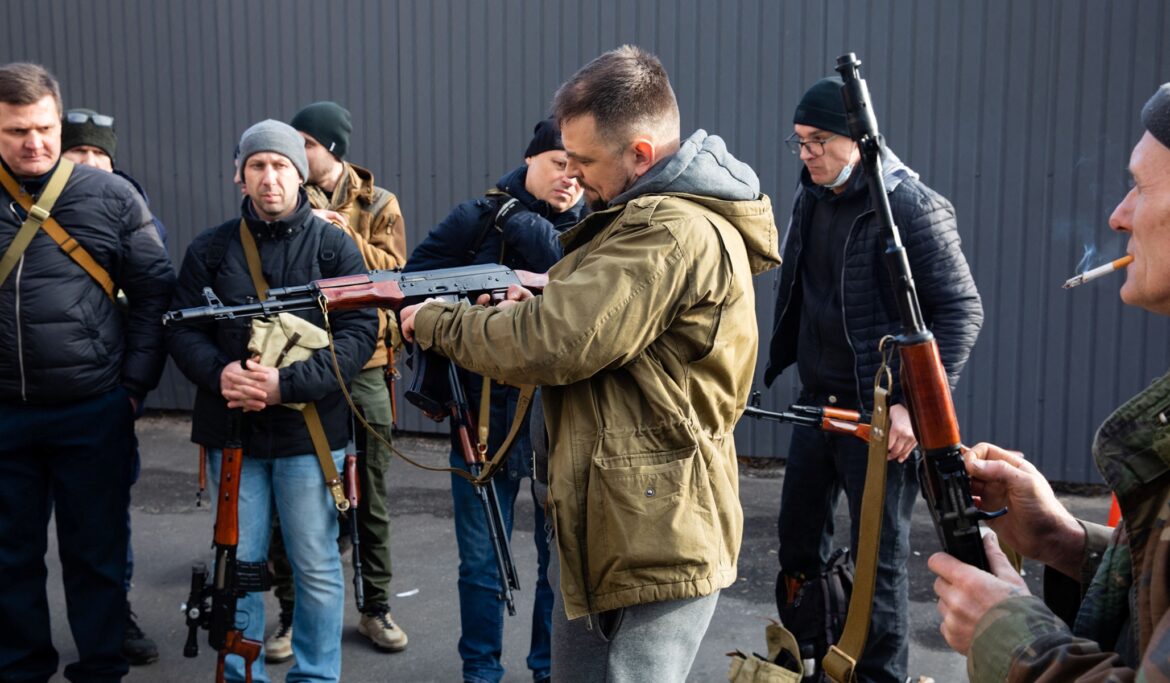 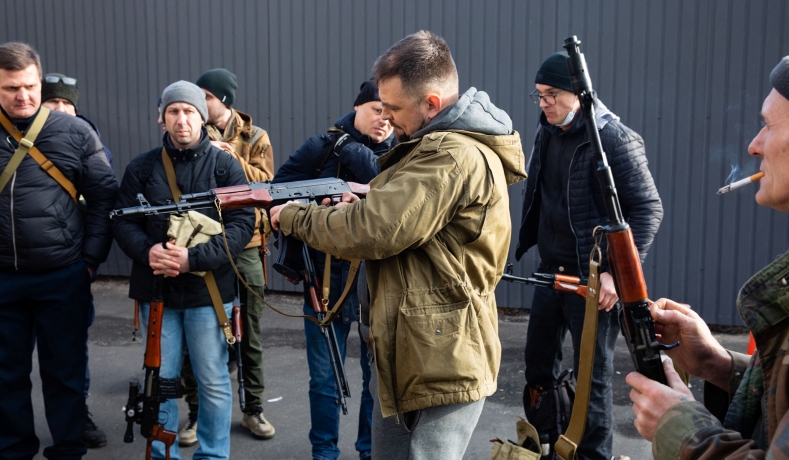 Members of the Territorial Defence Forces of Ukraine receive weapons to defend the city of Kyiv, Ukraine, February 2022. (Mikhail Palinchak/Pool via REUTERS)

After a brutal night of Russian air assault, Ukrainians defended the capital city of Kyiv from attack, although with mounting civilian casualties. Meanwhile, neighboring countries have welcomed refugees and Western allies have committed to immediately send additional weaponry and humanitarian support.

During a early press briefing Saturday morning, Ukrainian President Volodymyr Zelenskyy confirmed: “We survived (the night). And we are successfully fighting off the enemy attacks.”

“Unfortunately, according to operative data, at the hands of the invaders we have 198 dead, including 3 children, 1,115 wounded, including 33 children,” Lyashko said.

Beyond a military attack, Russian forces have committed war crimes, the Ukrainian ambassador to the U.S. Oksana Markarova claimed Saturday during an appearance on ABC News. Despite their contradictory assertions, Russia has shelled civilian infrastructure, including an orphanage, hospital, and private houses and apartments, triggering a humanitarian crisis and exodus to the West and nearby countries, she said.

Zelensky said in a Twitter post Saturday morning that Turkey has banned the passage of Russian warships from crossing the Bosphorus Strait to the Black Sea, limiting its ability to sustain amphibious assault. Russia already has a naval base in the Crimean city of Sebastopol, a major port on the Black Sea.

On Friday night, Zelenskyy dismissed rumors that he planned to flee rather than fight for his country. He posted a handheld video with members of his Cabinet next to the presidential palace in Kyiv, preparing to meet the bloody conflict ahead alongside the people. Pictures were captured depicting Zelensky in military garb, holding arms.

“We are all here,” he said. “We are defending our independence, our country.”

Early Saturday morning, Zelensky addressed speculation that he had fled Kyiv and doubled-down on his administration’s pledge to fight the Russian invasion of their homeland.

“There’s a lot of fake news that I’m calling on the army to put down its arms and evacuate. Here’s how it is: I’m here. We are not putting down any arms. We will protect our country, because our weapons are our truth. The truth is that this is our land, our country, our children, and we will protect them all,” he declared.

Zelensky reportedly rejected an offer of evacuation from the U.S. from Kyiv, the Ukraine embassy in Britain said Saturday on Twitter.

“The fight is here; I need ammunition, not a ride,” Zelensky told the U.S., according to the embassy.

Markarova claimed that Russian President Vladimir Putin was opposed to not only Ukraine’s autonomy but also the specific system of government and western values it operates under.

“We don’t have any other home and we will defend this one. And we defended our choice to be not only sovereign, not only independent, but also European and democratic and this is the reason Putin attacked us,” she said.

“We remain committed to defend our home, we resist, we will not surrender our capital to the enemy.”

She pleaded with Ukrainian allies to provide military, financial, and humanitarian aid. Multiple nations have heeded the call, with Zelenskyy announcing Saturday that he spoke to French president Emmanuel Macron and “weapons and equipment from our partners are on the way” to Ukraine.

Zelensky has also communicated with Canadian prime minister Justin Trudeau, Federal Chancellor of Austria Karl Nehammer, and the President of the European Union Commission Ursula von der Leyen, about “concrete sanctions and concrete assistance for our military,” he tweeted Thursday.