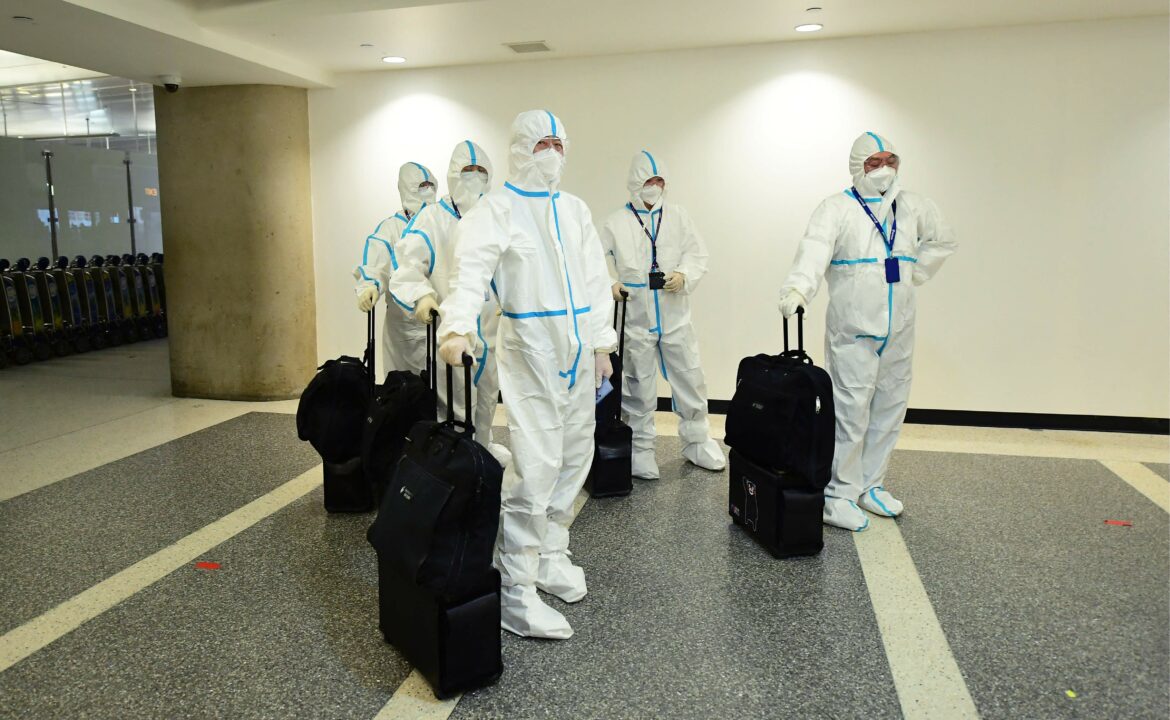 The U.S. is expanding its aid for international COVID-19 vaccine access.

The U.S. Agency for International Development, or USAID, announced its new program on Monday: the U.S. Government’s Initiative for Global Vaccine Access, or Global VAX for short.

The new Global VAX program will invest $315 million to support vaccine readiness programs, in addition to $10 million for in-country vaccine manufacturing and $75 million for delivering life-saving resources such as oxygen, USAID said.

The initiative will prioritize scaling up support to countries in sub-Saharan Africa, where vaccination rates remain strikingly low compared to other parts of the world.

While nearly 70% of the population in the U.S. has received at least one COVID-19 shot, only about 17% have in Botswana – where scientists first detected the new, rapidly spreading omicron variant.

This disparity has played out across the world, and it’s one health experts have warned of since the onset of the pandemic: While richer countries rapidly vaccinate their populations and buy up doses, other nations are projected to not have wider access to the vaccine until late 2022 or 2023, according to the World Health Organization.

Before the announcement of Global VAX, the United States already pledged more doses than any other country to lower and middle-income nations. The U.S. has “shipped for free more vaccine than all other countries in the world combined,” President Joe Biden said.

Yet, fewer than one-quarter of the 1.2 billion vaccine doses donated by the U.S. have been delivered.

And the path of omicron, which is now present in over one-third of U.S. states, shows that Americans are vulnerable no matter where a new variant first appears.

►A Spanish hospital said 68 staff members, including intensive care nurses and doctors, tested positive for COVID-19 after attending a Christmas dinner with 170 staff members at a restaurant last weekend.

►The CDC updated its COVID-19 testing guidance Monday to encourage people – even if they have no symptoms or exposures –  to self-test for the virus before going to indoor gatherings with others outside their household, especially if unvaccinated children, older people or people who are immunocompromised will be present.

►Canadian and British drug developers, Medicago and GlaxoSmithKline, announced Tuesday that new data shows the companies’ plant-based COVID-19 vaccine candidate is 75.3% effective against the delta variant. Medicago said full results of the study will soon be released in a peer-reviewed publication before the drugmaker seeks regulatory approval from Canadian health regulators.

►The University of Notre Dame is requiring students to get a COVID-19 booster to keep their fully vaccinated status.

►Reported cases of COVID-19 cases among Indiana’s K-12 students jumped back up, after taking a dip around the Thanksgiving holiday. There were 4,321 new cases reported among students this week, the highest number of newly-reported cases since mid-September.

📈 Today’s numbers: The U.S. has recorded more than 49 million confirmed COVID-19 cases and more than 789,000 deaths, according to Johns Hopkins University data. Global totals: More than 266.6 million cases and 5.2 million deaths. More than 199 million Americans – 60% of the population – are fully vaccinated, according to the CDC.

📘 What we’re reading: For a year since COVID-19 vaccines first became available, a small but vocal group has warned about the need to protect the most vulnerable around the world. But the response from wealthier nations has been slow.

Keep refreshing this page for the latest news. Want more? Sign up for USA TODAY’s Coronavirus Watch free newsletter to receive updates directly to your inbox and join our Facebook group.

The omicron variant has been detected in Houston’s wastewater, the city announced Monday. The city’s health department said this is the first indication the new variant has made its way to Houston, though an omicron case has not yet been confirmed in the city.

The health department regularly tests wastewater for the virus that causes COVID-19 because people infected with COVID-19 “shed the virus in their feces,” the city said. The department recently started testing for the omicron variant, saying wastewater data helps to “more quickly identify emerging outbreaks and hotspots.”

“Omicron in Houston is cause for concern but not panic,” David Persse, chief medical officer for the City of Houston, said in a statement. “It’s important to remember that vaccination is our best tool to reduce cases, prevent serious illness and death, and slow the emergence of new variants.”

As scientists remain uncertain about the potential effect of the new omicron variant and more Americans are eligible for booster shots, demand for COVID-19 vaccines has increased in the past week.

“This is important progress,” he said.

During the week ending on Thursday, almost 1.43 million vaccine doses were administered in the U.S. – a 22% increase from the previous week, according to the latest CDC report.

“Total doses administered increasing as we approach winter and with Omicron spreading,” he said. “Need to keep this up.”

A court order issued late Friday allowed a Pennsylvania man on a ventilator in a medically induced coma from COVID-19 to be treated with the controversial drug ivermectin.

Keith Smith’s wife, Darla, filed a lawsuit in York County Court last week asking a judge to compel the hospital to treat her husband with ivermectin, seeking an emergency injunction to force UPMC Memorial to administer the drug.

Ivermectin is an anti-parasitic that is not part of the medical center’s COVID-19 protocols and is not approved by the U.S. Food and Drug Administration for the treatment of the virus.

But a paragraph of the order directed UPMC to allow the doctor who had prescribed the drug or another physician or registered nurse to administer it under the doctor’s “guidance and supervision.”

The court order touched off a weekend of back and forth between the lawyers involved, Darla Smith and the hospital’s administration, ending Sunday night when Keith Smith, 52, received his first dose of ivermectin.

Early reports from South Africa seem to indicate the omicron variant of coronavirus is much more contagious than previous variants while causing milder disease, though experts there warn definitive data won’t be available for weeks.

“This virus comes with both barrels loaded – high infectivity and potentially the ability for immune evasion. But maybe what it’s lacking is pathogenicity,” said Dr. Warner Greene, director of the Center for HIV Cure Research at the Gladstone Institutes in San Francisco.

COVID-19 cases in South Africa’s Gauteng province are doubling every day and 75% of infections are from omicron. There is also a week-over-week increase in hospital admissions.

But so far there have not been an increase in deaths or even hospitalized people who require oxygen, said Greene, who spoke on a call with reporters Monday.

Currently, the global epicenter of omicron cases is the Tshwane district in the Gauteng province to the northeast of Johannesburg. Cases there have increased exponentially in the past several weeks, according to the South African Medical Research Council.