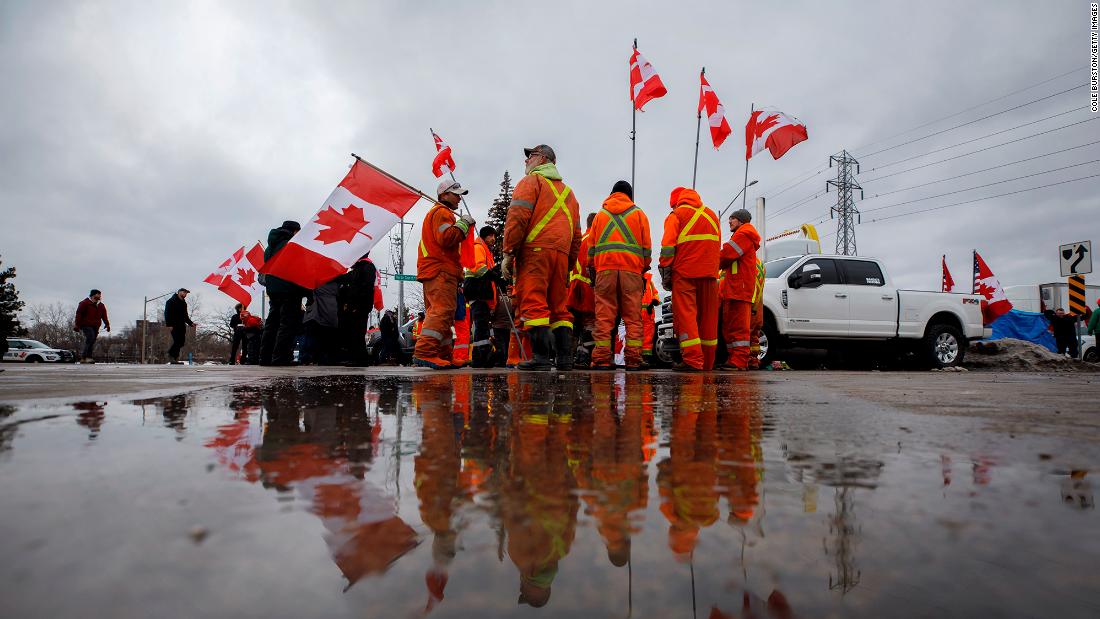 In a joint statement Thursday night, the US Chamber of Commerce, Business Roundtable and National Association of Manufacturers urged a swift resolution to the blockages.

“The disruptions we are seeing at the US-Canada border — at the Detroit-Windsor Ambassador Bridge and at other crossings — are adding to the significant supply chain strains on manufacturers and other businesses in the United States,” the trade groups said.

Access to three border crossings in Michigan, North Dakota and Montana have been cut off by truckers and other demonstrators on the Canadian side of the border. The situation can’t help — and could worsen — the historic bout of inflation hitting the US economy.

“The business community is rolling up its sleeves to find workarounds and keep facilities up and running, but we are already seeing some production cuts, shift reductions, and temporary plant closures,” the business groups said. “The North American economy relies on our ability to work closely together, including our manufacturing sectors. We need to apply the same spirit of cooperation to tackle this problem.”

Car factories on both sides of the border — from the suburbs of Toronto to Georgetown, Kentucky 600 miles away — have slowed their assembly lines or shut down altogether because they can’t get the parts they need. The disruptions could exacerbate the shortage of cars that caused new car and truck prices to spike in January by the most on record. Although GM and Stellantis said plants were open as usual Friday, Toyota reported factory shutdowns as far away as Alabama and West Virginia.

“We respectfully urge the Canadian government to act swiftly to address the disruption to the flow of trade and its impact on manufacturers and other businesses on both sides of the border,” the trio of business groups said. “We appreciate that the Biden Administration is engaged with the Canadian government, and we strongly encourage officials to continue efforts to resolve these blockages at the border.”

The statement comes after a coalition of three auto industry trade groups, including those representing auto makers and parts suppliers, similarly warned of turmoil caused by the protests.

“The current border disruptions at the Detroit-Windsor Ambassador Bridge and other crossings are adding additional strain to the automotive supply chain that has already been stressed by semiconductor shortages and other pandemic-related issues,” the auto groups said.