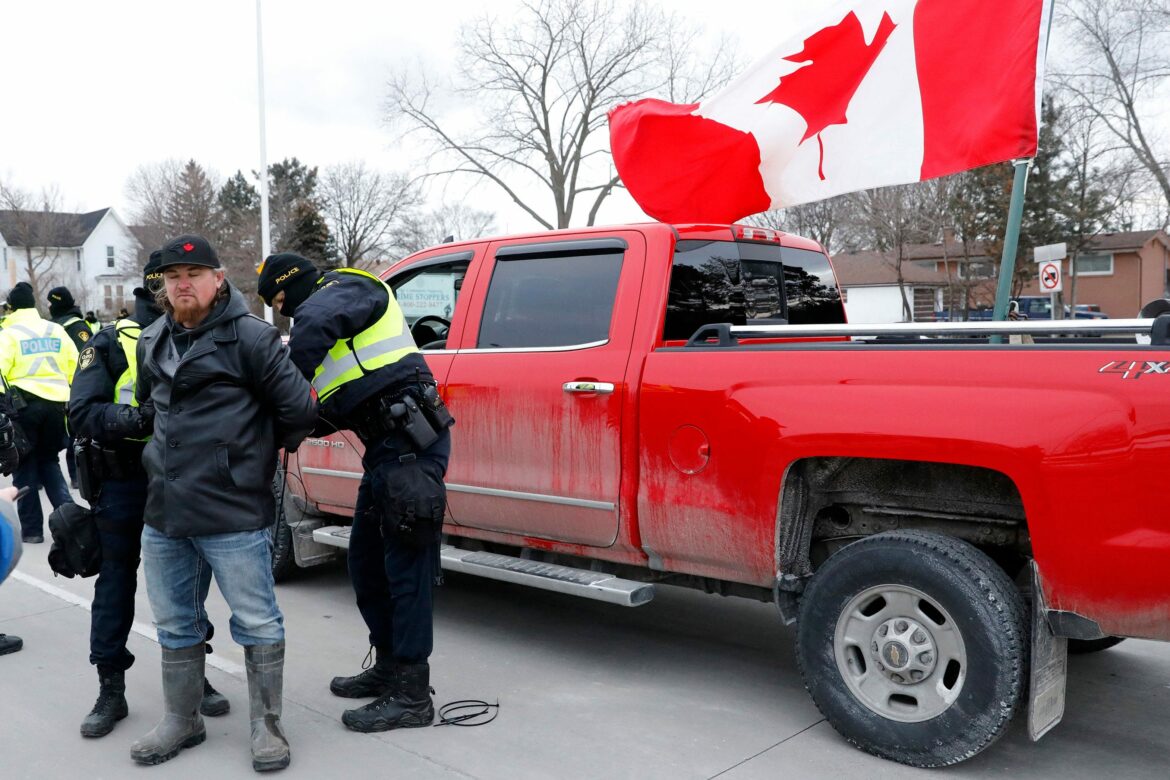 Babies younger than 6 months old wouldn’t be eligible for a COVID-19 vaccine even if the shots now under consideration for younger children were authorized.

A new study indicates most of the infants wouldn’t need them to avoid severe disease as long as the mother got the vaccine during pregnancy.

The research, released Tuesday by the Centers for Disease Control and Prevention, provides the first real-world data showing antibodies from the vaccinated mother carried through the placenta may protect the baby from the worst effects of COVID-19.

Researchers analyzed information from 20 children’s hospitals in 17 states from July 2021 through mid-January and found babies of mothers who got vaccinated during pregnancy were 61% less likely to be hospitalized with COVID through their first six months. Vaccination seemed to be most protective after the first 20 weeks.

Of those infants who landed in a hospital with COVID, 84% were born to mothers not vaccinated during pregnancy. Those babies were also much more likely to wind up in an ICU.

“I cannot emphasize enough how today’s findings reinforce the importance of COVID-19 vaccination during pregnancy, both to protect the people who are pregnant and to help protect their babies,” said Dr. Dana Meaney-Delman, Chief of Infant Outcomes Monitoring Research and Prevention Branch at the CDC.

The agency already recommends vaccination against the coronavirus for expectant mothers and those planning to get pregnant, not only to improve their chances of avoiding severe COVID but also to lower their risk that the disease may contribute to miscarriage, stillbirth, preterm birth and other pregnancy complications.

►Novak Djokovic, winner of 20 Grand Slam tennis tournaments, said missing the French Open and Wimbledon “is the price I am willing to pay” if vaccination against the coronavirus is required. Djokovic, 34, was forced out of the Australian Open last month after declining to comply with the country’s vaccination mandate.

►The CDC on Tuesday softened its guidance on cruise ship travel from level 4 — avoid — to level 3, suggesting travelers are “up to date” on their COVID-19 vaccines.

►Vermont officials will recommend at the end of the month that schools with a student vaccination rate of 80% or higher need not require masks, Gov. Phil Scott said Tuesday.

►Federal health officials are warning U.S. travelers to avoid more than 135 destinations, including South Korea and Belarus, because of high levels of coronavirus transmission.

►Sweden is recommending a fourth COVID-19 vaccine dose to people over age 80 and those living in nursing homes or getting home care, authorities said Monday, adding it must be administered no earlier than four months after the previous shot.

📈Today’s numbers: The U.S. has recorded more than 77.9 million confirmed COVID-19 cases and more than 923,400 deaths, according to Johns Hopkins University data. Global totals: More than 414.6 million cases and over 5.8 million deaths. More than 213.9 million Americans – 64.4% – are fully vaccinated, according to the Centers for Disease Control and Prevention.

📘 What we’re reading: The four free COVID-19 rapid tests President Joe Biden promised in December for every American household have been arriving in earnest in mailboxes and on doorsteps. How much is the government paying for each test? And what were the terms of the agreements? The government won’t yet say, even though, by law, this information should be available.

Keep refreshing this page for the latest news. Want more? Sign up for USA TODAY’s free Coronavirus Watch newsletter to receive updates directly to your inbox and join our Facebook group.

Hours after Prime Minister Justin Trudeau announced Monday a crackdown on the truckers and other protesters who have clogged streets and blocked border crossings in parts of Canada, signs of movement started to emerge.

It wasn’t soon enough to save the job of Ottawa Police Chief Peter Sloly, who was ousted Tuesday following criticism that insufficient police response to a siege by truck drivers had allowed them to disrupt life in the Canadian capital for more than two weeks.

Big rigs and other vehicles began to roll out of the southern Alberta town of Coutts on Monday and Tuesday, ending a blockade that paralyzed a U.S. border crossing into Montana for more than two weeks.

A convoy of truck drivers and supporters protesting Canada’s COVID-19 measures had been restricting access to the crossing at Coutts since Jan. 29. On Monday, the Royal Canadian Mounted Police said it arrested 13 people plotting to use violence to maintain the blockade, and police seized a cache of guns and ammunition at the crossing.

On Sunday, the convoy obstructing the Ambassador Bridge that connects Detroit to Windsor, Ontario – carrying 25% of the trade between Canada and the U.S. – was disbanded after a Friday court ruling ordered protesters to move.

Many residents in Ottawa, infuriated over the bumper-to-bumper demonstration by hundreds of truck drivers and feeling harassed and intimidated by protesters, want similar action taken in their city, where an outnumbered police department had largely taken a hands-off approach.

By Tuesday, though, Ottawa’s police board said the number of vehicles that remained involved in the blockade in the city’s core had dwindled from a high of roughly 4,000 to 360. A command center was set up so the RCMP and the Ontario Provincial Police could assume command over the situation, apparently relegating Ottawa police to a secondary role. Said interim Ottawa Police Chief Steve Bell: “I believe we now have the resources and partners to put a safe end to this occupation.”

New York City has fired 1,430 workers who failed to comply with its COVID-19 vaccine mandate, a total representing less than 1% of the 370,000-person city workforce.

Educators and first responders were not spared: The total includes 36 NYPD personnel, 25 Fire Department workers and 914 education staffers. Almost all of those let go haven’t been working or collecting paychecks since November.

The fate of nearly 10,000 more workers is pending as medical and religious exemption requests and appeals make their way through the system. The mandate has survived a series of legal challenges – last week the U.S. Supreme Court denied an emergency appeal sought by some city teachers.

Mayor Eric Adams lauded city workers for their willingness to get vaccinated in large numbers, referring to the “Get Stuff Done” theme he has repeatedly stressed since taking office.

“Our goal was always to vaccinate, not terminate, and city workers stepped up and met the goal placed before them,” Adams said in a statement. “I’m grateful to all the city workers who continue to serve New Yorkers and ‘Get Stuff Done’ for the greatest city in the world.”

Russia and Ukraine, embroiled in a political conflict that has the world on edge, also are struggling with runaway coronavirus infections. The head of the World Health Organization’s Europe office said Tuesday that the two nations are among six in Eastern Europe that have seen new cases double in the last two weeks. About half of all Russians are fully vaccinated; about one-third of the population of Ukraine is inoculated. The other four countries with the booming numbers are Armenia, Azerbaijan, Belarus and Georgia.

“Today, our focus is toward the east of the WHO European region,” Dr. Hans Kluge said. “As anticipated, the omicron wave is moving east.”

Washington, D.C., Mayor Muriel Bowser is rolling back vaccination and mask mandates. Effective Tuesday, indoor venues are no longer required to verify that patrons are vaccinated, although businesses may choose to keep the requirement in place. And on March 1, masks will no longer be required in most public spaces and houses of worship. They will still be needed in schools, day care and medical facilities, libraries, city offices, public transit, cabs and rideshare vehicles.

Since the height of the omicron wave in Washington, COVID-19 cases have dropped by more than 90% and there’s been a 95% reduction in hospitalizations, Bowser said.

COVID-19 cases have fallen dramatically across the U.S. in recent weeks, and pediatric cases are no exception. Coronavirus cases in children totaled 300,000 in the week ending Feb. 10, less than a third of cases recorded in a week during omicron’s peak in mid-January, the American Academy of Pediatrics reported.

Vaccines are not yet available for children under age 5 in the U.S. On Monday, Hong Kong authorities said they will begin vaccinating children as young as 3 years old to combat a record surge of infections.

The Wisconsin Senate is considering measures aimed at protecting workers who don’t want the coronavirus vaccine, including one measure that would require employers to count a prior coronavirus infection as an alternative to vaccination and testing. Another would prohibit requiring proof of vaccination while the others involve unemployment benefits and workers’ compensation. All four bills could face vetoes from Democratic Gov. Tony Evers.

Wisconsin, which has no statewide vaccine mandate or requirements to wear masks, has seen 11,000 residents die from COVID in the last two years.

Most people who die of COVID-19 first spend time in an ICU. Early in the pandemic, about one-third of COVID-19 patients treated in intensive care died. Those figures are far better now, though precise numbers aren’t available.

A study published in late January found that among Dutch people treated for COVID-19 in an ICU, 74% still had physical symptoms a year later, including weakness and muscle and joint pain. More than a quarter reported lingering mental symptoms and 16% had cognitive problems.

COVID-19 patients who end up in intensive care have a rougher road than those with other respiratory illnesses, often suffering long-term organ damage, said Dr. Amit Gaggar, an attending physician in ICUs at the University of Alabama at Birmingham and the Birmingham VA Medical Center.

After being released, many have lingering shortness of breath, new or exacerbated heart failure, kidney problems and lung scarring – all conditions that are possible after an ICU stay without COVID-19. But, Gaggar said, “the degree is a lot more severe with the COVID population.” Read more here.