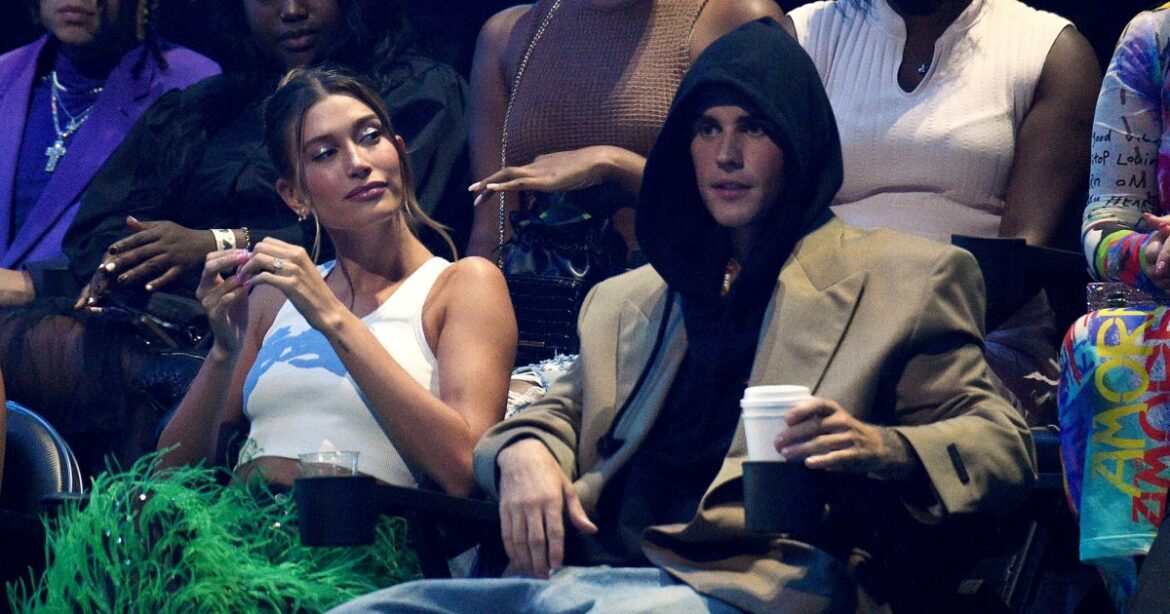 Fans didn’t see everything at the 2021 VMAs, but Us Weekly caught all the juicy details fans couldn’t watch on MTV at the Barclays Center in Brooklyn.

Between winning two Video Music Awards and opening the Sunday, September 12 show, Justin Bieber spent plenty of time soaking in the attention on stage — but he was still a doting husband offstage. He gave wife Hailey Bieber (nee Baldwin) a calf massage while they watched the show, which was hosted by Doja Cat.

Justin, 27, was a big winner at the VMAs, taking home Best Pop as well as the coveted Artist of the Year. In his first award, he referred to Hailey, 24, as “bae,” but he gave her a more meaningful shout-out when he scored the latter.

“I look over here and I see my beautiful wife and I just want to say I love you so much,” the “Peaches” singer said as he accepted the Artist of the Year Moonperson.

“I know you guys have probably heard it a lot, but we are in unprecedented times right now, with this COVID thing that’s happening,” he said in his acceptance speech. “It’s a big deal. Music is such an amazing opportunity and an amazing outlet to be able to reach people and to be able to bring us all together.”

He continued, “We’re all here together, you know? And we got a lot more in common than we don’t.”

Justin and Hailey weren’t the only celeb couple at the VMAs. Travis Barker and Kourtney Kardashian packed on the PDA while their friends Machine Gun Kelly and Megan Fox also caused a stir on the red carpet.

MGK and Conor McGregor seemed to get into a scuffle on the red carpet before the show. They appeared to be yelling at each other, but McGregor, 33, denied getting into a fight, despite claims that the rapper, 31, asked the fighter for a photo before the confrontation.

“This is totally false. [There was] no photo request,” the Ireland native’s spokesperson told Us, noting that Kelly “attended Conor’s last fight” and the athlete “appreciates all his fans.”

McGregor told Entertainment Tonight that “absolutely nothing” happened, explaining, “I don’t know. He showed up, and I don’t know. I don’t know the guy. Nothing happened with me, I only fight real fighters, people that actually fight, you know what I mean? I certainly don’t fight little vanilla boy rappers. I don’t even know the guy. I don’t know anything about him, except that he’s with Megan Fox.”

The drama continued for the “My Bloody Valentine” performer, whose real name is Colson Baker, during the show. He and Barker’s performance of “Papercuts” was delayed.

“Machine Gun Kelly buried himself in a grave as they were setting up to perform. He then burst out of the dirt in his grave, ran off stage and said something to Travis,” an eyewitness exclusively told Us. “He was throwing elbows and seemed very upset before running backstage. The crew came and rolled off MGK’s grave and Travis’ huge drum off the stage.”

All was well by the time the show finished though. Kelly, Fox, 35, Barker and Kardashian, 42, headed out for a post-show dinner together.

Scroll down to get the exclusive details on everything you didn’t see on TV!