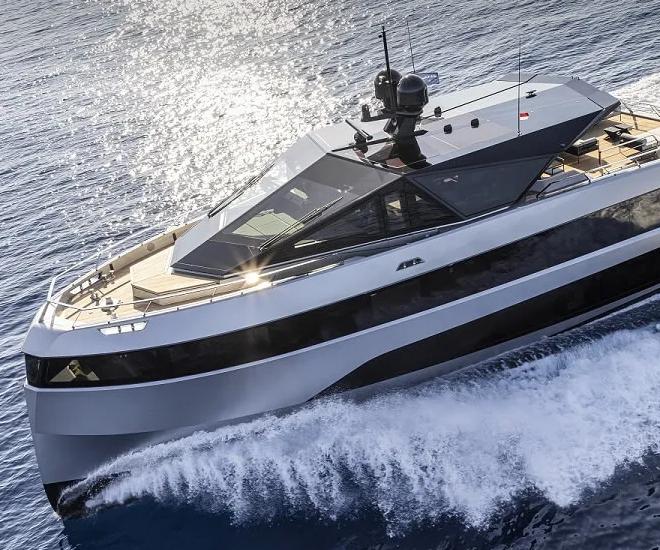 The Wally Hybrid Yacht (WHY) 200, according to Wally Managing Director and Ferretti Group CCO Stefano de Vivo, is the answer to the “power catamaran”.

“Now you see why we say we created a new sector with the WHY200. If you don’t see the inside, you don’t understand the outside.”

Described as the world’s largest fibreglass motor yacht, it allows 30 per cent more deck surface than any other yacht in the sub-100ft market with its sub-24m load line. The saloon’s width of 23ft is similar to the 164ft Riva 50 Metri.

The WHY200 has all the good points of a luxury motor yacht and moves like a performance powerboat. Fronted by an outstanding bow of 15ft 5in, the 88ft 8in hybrid motor yacht is a true widebody. The deck and a working area in front of the helm station are the yacht’s only outdoor spaces. With the design’s focus on interior space and coupled with its gigantic beam, the 200GT Wally certainly surpasses all competition when it comes to volume. In recent years, other creators of fibreglass flybridge motor yachts have also made noteworthy pushes towards volume and range in designs. Wally, on the other hand, was revealed by Ferretti Group to be “a bit of a gamble” when the design was combined with Wally-styled carbon and glass superstructure.

In regards to whether Wally has gone too far into the extreme with its newer designs, Alberto Galassi, CEO of Ferretti Group, cited Henry Ford’s quote: “If I had asked people what they wanted, they would have said faster horses.”

Founder and Chief Designer Luca Bassani — often described as two decades ahead of the game — said, “WHY200 has the ‘wow’ factor engraved in its DNA”.

It all started in 2019 when Ferretti Group tasked Bassani to design a high-volume and semi-displacement yacht. The ingenious Bassani began on the hull first and worked with British firm Laurent Giles on the naval architecture, to eventually produce a semi-displacement hull that reaches 23 knots with stronger quadruple engine options.

Other than volume as a factor, another one for crafting a wide yacht was to increase stability to be like a catamaran. The widest part of the yacht is the stern, which includes the 345sqft beach club with an Opacmare transformer, the 500sqft main-deck cockpit overlooking sunbathing areas above both garages, and the aft flybridge that leads to port and a dining table.

The split garage function is probably one of WHY200’S most innovative features — Bassani moving storage space to the side bulwarks instead, which creates a great deal of space and views that will not be blocked by a central garage. The side bulwarks open up to a Williams DiesetJet 415 while the port side can fit a large jetski, Seabob or other water toys. 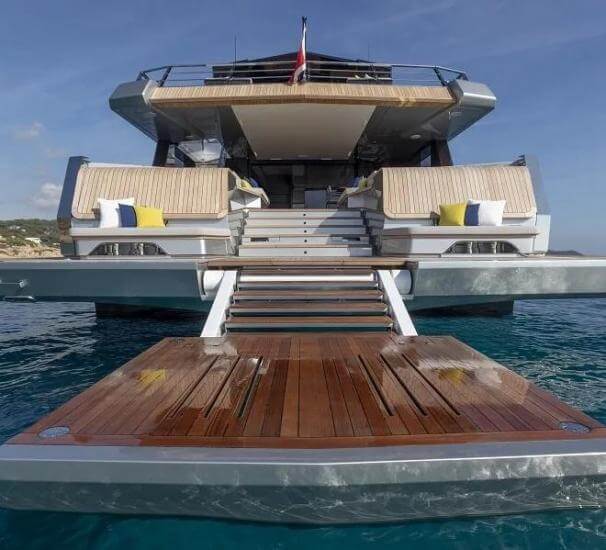 The interior design was handled by Italian studio A. Vallicelli & C. It showcases a stunning blend of wood, sandy tones, matte black, white and shades of grey. A curious yet arguably perfect element is the carbon-and-glass staircase placed right in the middle of the saloon. It cuts the enormous saloon in half and is a vital structure. The flexibility comes where owners can arrange and design the interiors however they wish to.

The first hull includes a long white cabinet, a show kitchen and bar stools. There is an area that can be used for dining or leisure activities as well. Further into the saloon, the layouts have two facing L-shaped sofas, coffee tables, chairs and a possible dining area as well.

The staircase leads to the skylounge equipped with a C-shaped sofa to port, a 55-inch TV and four skylights in total. Along with the helm station, the skylounge is covered by a sleek 6-7m extension from the exceptional carbon structure. From there, the huge outdoor area can be accessed, housing sun loungers and a wet bar on the starboard. Indoors, the main deck might just be the most magnificent room of them all: a 400sqft, 270-degree view master suite in the bow with a layout that could have powerful appeal in Asia. Hull one features a forward-facing bed and his and hers bathrooms. There are also options for the space to include just one bathroom, a walk-in dressing room, a dining room with a circular table and a corner bar. It really depends on how you want to use it and what for.

“The volume carried forward on the main deck was a result of the high bow, so I thought we could exploit this new volume by having an owner’s suite. It has the best view and a good position because you’re far from the engine room. All potential clients who have been on board love this position,” said Bassani.

On the lower-deck cabins, there are identical guest rooms on each side, both with inward-facing beds and forward bathrooms. These cabins include a full-beam stateroom forward that can also be made into the VIP or master suite if the forward room in the main deck is used for another purpose.

Below the flybridge steps are the crew area and main galley, which is aft of the central staircase. There is the captain’s cabin with an en-suite containing separate showers, two twin-bunk rooms and a shared bathroom of separate showers too, with the crew.

The Future Of Boating

The WHY200’s technology includes a 5G wireless connection with automation control that guests can play with via mobile devices, throughout the yacht. An advanced Sonance sound system is installed in the outdoor areas, while the first hull has a 5.1 Premium sound system on both upper and main decks.

In terms of propulsion, the first unit is powered by four 1,000hp Volvo Penta D-13 IPS 1350 engines. Fuel can be saved by running on only two engines at displacement. 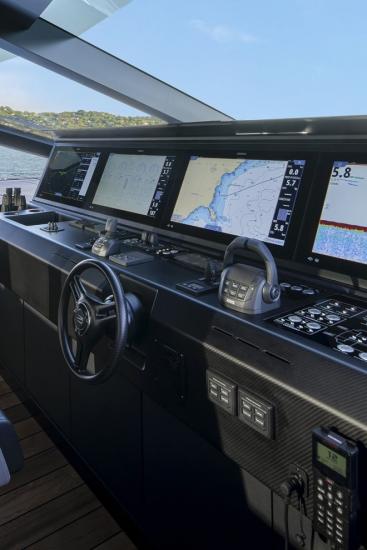 Bassani highlighted that the hull displayed an “impressive ability to cut through chunky waves with minimal pitching” and “corners like it’s on rails” without any stiffness a twin hull has.

Currently, the Ferretti Group is manufacturing many more units in Mondolfo, even though a new facility is to be arranged for a range of WHY models. At the moment, WHY200’s hull six has been shortlisted for Asia as the Group plans to release the front-running model to global markets. Until then, we will have to wait for what the market has to say about Wally’s futuristic designs and its positioning in the industry.