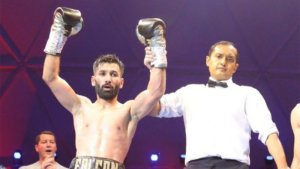 The Pakistani got a unanimous decision with cards of 115-113, 115-114, and 117-111, thus achieving an important victory that positions him as the next mandatory rival for the 112-pound monarch, Artem Dalakian.

It was not an easy match for Waseem, who encountered a strong Barrera willing to rain on his parade.  It was a fight with a lot of action and blow exchanges in which both had good moments but Waseem took advantage of his physical condition to defeat the Colombian boxer.